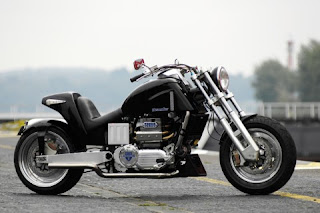 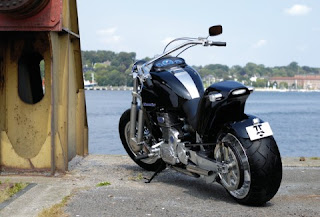 Take at look at it and say that you dont want a ride on it. Just Drool for the time being looking at that huge mass. Well, its the NEANDER 1400 TURBO DIESEL Motorcycle.
Yes, its a TURBO Diesel motorcycle. Start with 1400cc and say 100bhp @ 4200rpm. Impressive for a diesel bike, right? Now guess how much Torque will this whooping machine develop? Remember its a diesel. It develops a staggering 200 Nm @ 2600 rpm!
Even big 3000cc MUVs & SUVs develop less torque than this naked 2 wheeled vehicle. 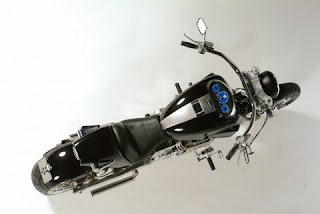 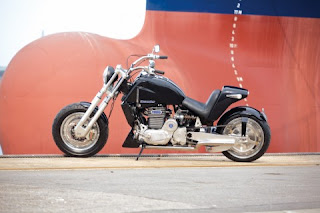 The Neander uses a parallel twin cylinder engine with two contra-rotating crankshafts to remove engine vibration. The 1340 cc engine produced 100 hp@4200 rpm and 200 Nm torque at 2600 rpm . It can attain a impressive-by-any-standards top speed of 220 kph (137 mph) and has an acceleration of 0-100 kmph (0-60mph) in 4 seconds flat!. In fact, its a Triumph Rocket III beater!!! And remember this is a diesel engine! 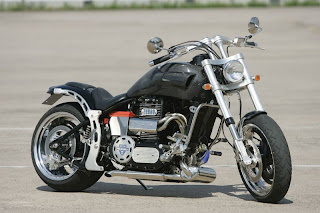 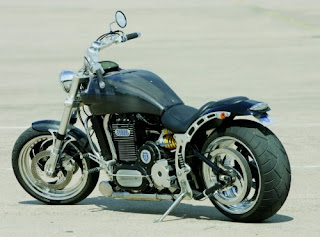 Huge massive tyres of 130/60-18 in the front and 240/40-18 in the back. Its bound to be quite heavy at 310 Kgs to be exact. The gas tank is not big, only 15 liters, but the diesel will run more fuel efficient, so you'll get a good mileage of roughly 22 kmpl of diesel and diesel is also cheaper than petrol.
The twin counter-rotating crankshaft design was specially foresighted by NEANDER to counter the weight and vibration issues of the usual diesel engines, so they designed a new diesel engine with the idea of low weight and vibration as goals. Mr. Heinz Hoenig is the dreamer for the NEANDER and it has taken him 5 years to finally bring this vehicle to road. Only 250 will be made and all according to custom specifications. While the first 4 photos are what made into the final stage, the rest are the ones when it was still a prototype. And by the looks of it, probably the first time ever in biking history, the production bike is more radical than the prototype and not only that, the final version is very very desirable. 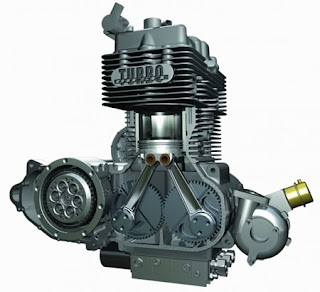 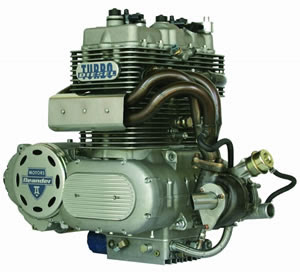 They’ve built a vertical parallel twin cylinder diesel, which would be plagued with far too much vibration in the configuration and displacement chosen, yet the counter rotating crankshafts all but cancel the majority of the vibration. The engine, as set up in the bike, is equipped with particulate filters for low emissions.
By all parameters it breaks away from the staid looking diesel motorcycles with a stunning low-rung cruiser appearance. The bike has a six speed transmission and belt final drive.
History - Rudolf Diesel was the man who invented the diesel engine, compression-ignition motor invented back in the 1890s and the engine has become a mainstay of transport, whether its marine, locomotive, urban transport, road haulage and anything you can think of—indeed, any application where its benefits of 30 percent lower fuel consumption, cleaner emissions and longer engine life, and probably many doesn't know, it doesn't have a spark plug. 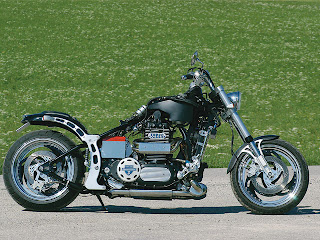 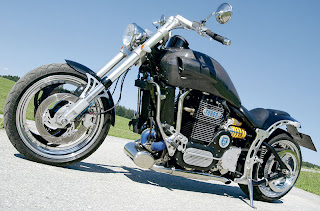 The cycle parts are conventional, with the parallel-twin motor slotted into a conventional chrome-moly tubular-steel spine frame designed by German custom specialist Gunther Zellner, with the engine underslung beneath. The frame's fully adjustable Ohlins cantilever monoshock rear end is quite radical by cruiser standards, however, matched to 43mm upside-down Paioli forks up front which are set at a kicked-out 31-degree head angle, with 109mm of trail, resulting in a rangy 1740mm wheelbase. Neander executive Lutz Lester says the company is looking at offering a 1950mm version also, with a target price of $85,000. 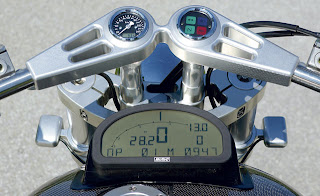 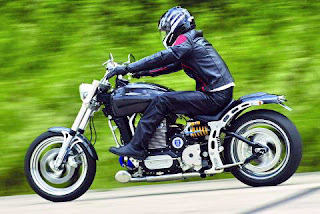