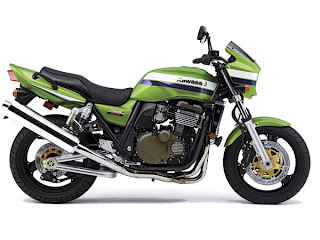 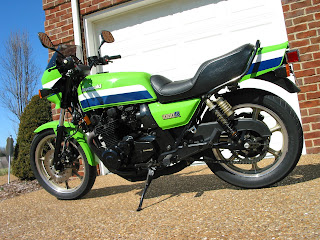 The KAWASAKI KZ1000R was in production from 1982-1983. This 998 cc, air cooled DOHC engine was a in-line four with claimed power output of 79hp @ 8,500rpm and had a top whack of 128mph. It's heavy at 247kg (543.5lb). MPG: 36.6 mpg (period test)
Interestingly all the bikes of this series had a single colour, of course the KAWASAKI Green. And that was it. This particular green was so synonymous with Kawasaki, that the colour came to be known as Kawasaki Green, just like Ducati red. And it made Kawasaki a Kawasaki. But then you just couldn't get one back then and still now. Why? Because it was a limited edition bike, around 750 were made. Price was around $4400 back then and now it has just doubled up and thats quoting the minimum, a well kept KZ 1000R will fetch you around $12,000. And the 'thingy' is that it was named after one certain Mr. Eddie Lawson, the four-time winner of the 500cc World Championship during the 1980s, the 1981-1982 AMA Superbike champion and the 1984 AMA Pro Athlete of the Year. Mr. Lawson made a superb comeback in 1993 when he won the Daytona 200 for the second time after retiring from full-time racing in 1990. he had 31 wins and 78 podium finishes racing in the 500cc circuit and was inducted in the Motorcycle Hall of Fame in 1999. With Kawasaki Superbike , he won the AMA Superbike Series in 1981 and 1982 and the AMA 250cc road racing National Championship in 1980 and 1981. 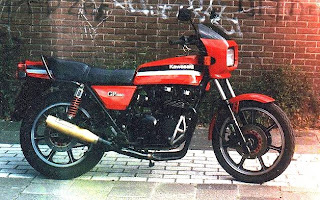 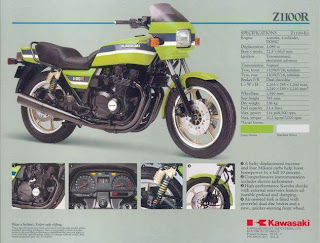 The KZ 1000R was name 'ELR' standing for Eddie Lawson Replica and the bright green colour was a tribute to Lawson’s bright green 1981-1982 Superbike. Of course, you wont be surprised that the ELR was based upon the legendary Z1, a post I made some time back. In 1977 the 908cc went up to 1015cc and after introducing the six-cylinder, 120hp Z1300, Kawasaki in 1981 stepped the 1015cc down by little to 998cc for the KZ1000J, a bike targetted at the European market focussing on sporty street performance. this was a improved Z1 with better emission norms, lesser vibrations, re-worked handling with better suspensions and a lighter engine. 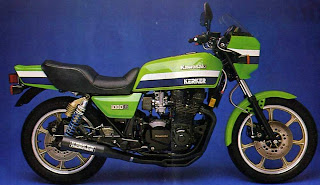 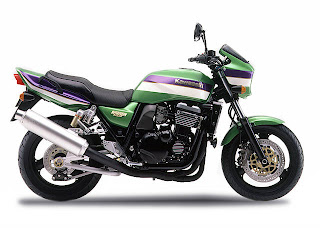 The KZ1000J was the basis of the KZ1000R. With a boxy but very sweet bikini fairing and a black treatment to the engine and handlebars, it inspired track-styling. A Kerker four-into-one exhaust , a small oil cooler, Dunlop K300 series tires and Showa shocks designed to look like the shocks on Lawson’s Superbike racer and brilliant Dunlop K300 tyres, it was a very sporty. The engine was of course carry forwarded from the 'J' series and the difference was the finishing treatment. The main change was in steering geometry and riding position. The rake angle was extended to 29 degrees from the J-model's 27.5-degree spec, with an accompanying increase in trail from 3.89 to 4.50 inches. The seat height was dropped by half an inch, and the footpegs were set four inches farther back and an inch higher.
Kawasaki also built 30 'real' racers, named S1 which were given to some choosen racers. Although this was a limited rin, Kawasaki later revived the spirit of this brilliant machine by releasing a replica called the ZRX 1100. Come to think about it, the ZRX 1100 was actually a replica of a replica, isn't it? Well, it was further increased to 1200 cc and in 2005, the ZRX 1200R returned in the candy version of the original Eddie Lawson Replica - Lime Green! 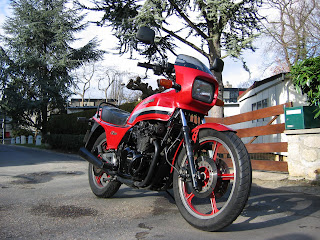 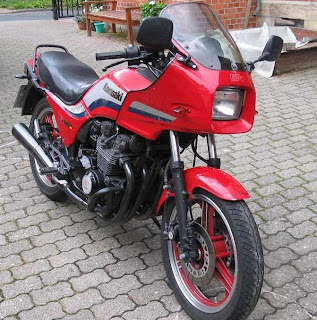 The KAWASAKI GPz550 was launched in 1981. It was also a 4S, in-line four DOHC engine belting out 57 bhp @ 9500rpm. Transmission was via a 6 speed gear box. Okay now lets get down to business. The GPz550 was a stunner. Period. In terms of performance. It would blow off even hardcore Kwackers by its sheer speed. And to go with the firecracker, it was painted in red. It was stylish with the black mufflers and the term 'pocket rocket' was actually coined for this bike. It was later also known as the godfather of the crotch rocket.
All of Kawasaki bikes, well most of them had the 'K' or 'Z' series like KZ1000 or Z1100, now when Kawasaki wanted to add 'something' more to a bike (read added performance), it had to have a different moniker, so what better than the 2 alphabets "GP"! So, you see, this GPz550 was an upgrade of the street hooligan KZ550, with a hot-rod version of the old machine’s four-cylinder engine, an air-charged fork, adjustable shocks and a bikini fairing.
The new engine generated a claimed 57bhp at 9,500rpm, 4bhp more than the KZ’s power plant, and did a quarter-mile time of 12.65 seconds — a world record in 550cc street bikes. 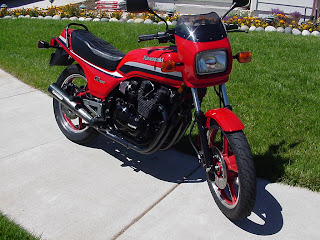 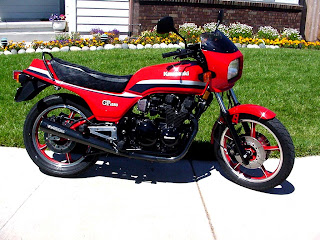 Just like the RD350 (which was but a 2S), the GPz 550 had a similar attitude when it was compared with bigger bikes. It blew away the 750s!
But more of all, it was an allrounder. It could do twists and straights with equal aplomb. It was not a guzzler, the ergonomics were suited for every style of riding and even the pillion was comfortable. It set the middleweight class alight when it came out in 1982. Obviously the GPZ600R has largely replaced it, but the 550 still has plenty of fans who prefer its handling, lines and air-cooled integrity.
The GPz later evolved to become the Z550A1. While the basic engine configuration remained the same, a seven-spoke cast wheels and a slab-sided tank was put to improve performance and give more confidence to the rider. Later the 7-spoke were changed to 5-spoke and the final model in 1984 had a LCD unit set in the petrol tank, the three-spoke wheels and a frame-mounted fairing. Suspension was made easier to adjust and anti-dive went on the forks.