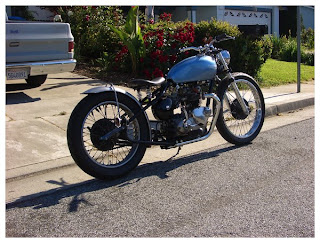 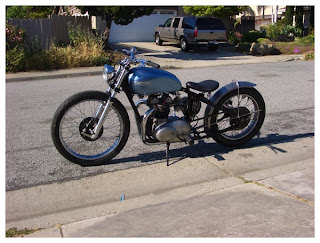 American Bikers and Customizers are varied and many in number with some very famous modifiers like Indian Larry or OCC making it to the very top of the business. While Larry's styling remained simple, mostly others like OCC or Pantera make flashy edgy and standout choppers. They WILL stand out in every crowd and why not? After all, its meant to be bling bling! Not that Larry's bike didn't stand out, its just that American customizers err... dont know how I should put it... bit loud (oops). But then, its meant to be. But what if you like a customized bike thats one of a kind, but you know not flashy and shiny? What if you want a customized bike which you will be 'comfortable' driving and your dont have to strech out to reach the handlebar or you know things like that? 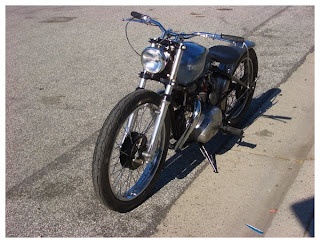 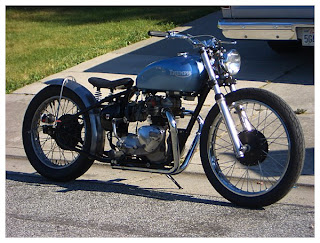 Well then Hollywood Bobbers are here to save you! Hollywood Bobbers has a panache for customizing classics bikes into beautiful creations which seems like a bike you can take out for everyday use and anyone who notices it will compliment you. It will not draw attention like an OCC bike, but it will stand out anywhere. Hollywood Bobbers are more into Cafe Racers and Hot Rods. To give you the actual picture of what I am trying to state, read what 'Hollywood' Bruce, the owner, has to say about the bikes they make."We build motorcycles that have a style like no other. Special attention is paid to details and the finished product is always the highest quality. Make no mistake, our bikes are not 'show queens'. They are meant to be ridden. Ridden hard." I am sure now its clear what I meant. And one more thing. They call them 'Bobbers' and not bikes or choppers! 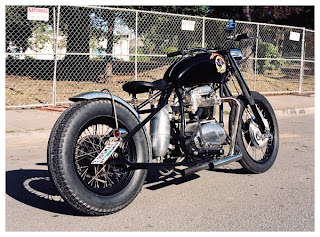 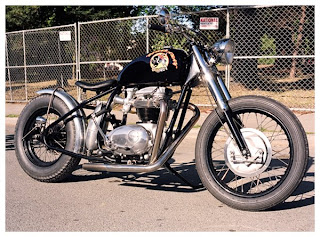 'Hollywood' Bruce has been building motorcycles and hot rods for over 25 years. He is a very passionate man and constructs one bike at a time, dedicating fully into a single bike to keep focussed. With a proven engine, the bikes are built tough for riding daily and can be used for commuting too. There are no add-ons, its just like a company factory bike. If you visit their website, no wonder you wont see too many products and thats because of the long hours spent in each bike to make it perfect.
The first bike is named 'SYD The Wild One' and this was the first 'Bobber'. This bike has a 1967 Triumph TR6 650cc engine with customized fenders, tank, seat and handlebar. The oil tank is customized and aptly called 'BOMB' tank. Although the frame is original, it has been chopped to accomodate the design. See the simplicity but notice the aristocracy it exhibits even in its bones and skeletons structure. 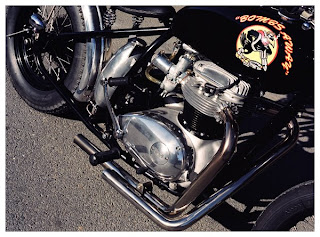 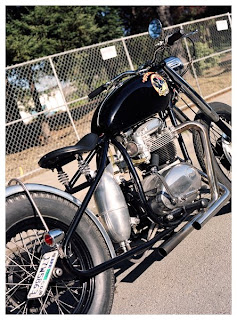 The detailing of each part customized are given in the website. Among marked features, it has 1.75" WASSEL Drag pipes, WEBCO carb external oil cooler. It doesn't have a battery, so you have to kickstart your way. The head light looks cool with the dome fully exposed as the mount is hidden. To get the retro touch, stainless steel spokes are on duty on both wheels (19" front & 16" rear) and twin leading shoe brakes for safety. Also the single seat is aided by springs. Tyres are AVON SpeedmasterThe second bike featured here is the The RAVEN. It has a 1967 BSA Lightning 650cc engine and chasis, the 4 gallon 'BOMB' tank to go along with the custom hardtail, ribbed alloy fender and custom drag pipes. The 29 degree Rake angle is hand made. The motor is from CLYDE DENNAN which is supposed to be the 'secret recipe'. Just like SYD, RAVEN has no batteries, BATES styled headlight mount, ribbed alloy fender with shaved forks. The spokes are stainless steel with similar size to the SYD. 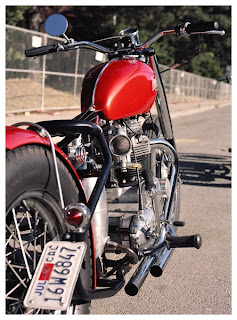 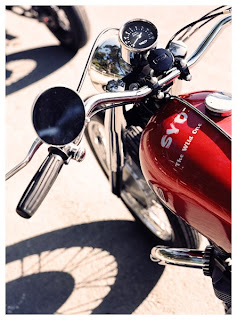 The third bike is named The CYCLONE, based on a Triumph 500 cc high revving engine. It features signature custom hardtail, paralllel TT pipes, and custom front end. the oil tank is smaller. There are more differences than the former two. The size of the wheels are 21" front and 18" rear to accomodate the racing genes. The front forks are from Suzuki RM250 which has been shaved. There is no battery. The customized steel ribbed rear has been cut and countoured to fit the tire profile. The tyres are AVON Roadrunner.
Visit their website to see more of these customized beauties. There current projects are a BSA Cafe Racer and the Raptor, also based on a BSA. You can also see the 'BOMB' tank in production and other custom parts. The naked frames and chassis looks absolutely bloody fantastic. All in all, if you want an exciting bike, fully customized which is also fun to drive and more so if you are a fan of the Brit classics, then Hollywood Bobbers have just answered your prayer. 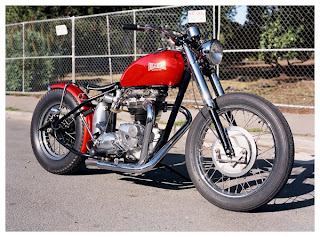 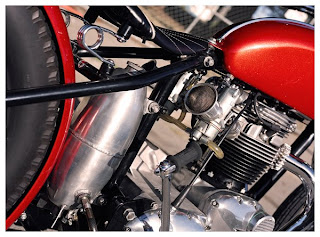