New Age Retro is the 'in' thing in motorcycling in this new century. From a Honda to a Harley to a Ducati to a Guzzi to a Triumph, everybody has a new-age retro in their stables. Then there are some companies which are also new-age and also retro, but not exactly 'new-age-retro. Not that I can give many examples, but our India's Royal Enfield surely fits the bill. Yes, it has a new unit construction engine with a EFI soon coming out, but the basis is very very retro, it still has the 50s vibration and oil leaks, the brakes are not really confidence-inspiring, not that it's speed with take you offthe seat, nonetheless, it somehow doesn't fit the tag of 'new-age-retro' dont you agree?Yet, there are suckers like me who swear by its thump, who swear by its presence. Its really hard to say, what, but there is something in these age old Bullets that draws us bikers like moth to a (Yes.. Yes..) Then again there are some guys who love this brand so much that regardless what the parent company does, they takeit own their own to stand up this iconic cult bike with the modern generation. One such duo are Ian Drysdale and Paul Carberry. 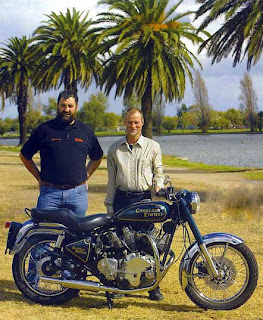 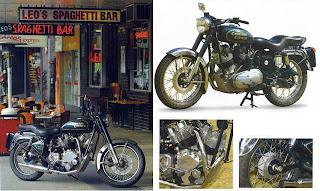 That Drysdale is crazy, you know it if you have read another post in this blog. So who is Paul Carberry? Close to 50, Paul Carberry is an Australian businessman who has been INTO bikes since 13. It seems at 13 he fitted his bicycle with a lawn mower engine. His website states that by 16 he had fitted a 250 Honda MX motor into a 125 Hodaka frame which he raced successfully in the local Motocross competition. Basically he started with a Triumph repair workshop for 10 years before moving to Indonesia to set up to import and distribute Royal Enfield motorcycles. There! And you know he was in love. 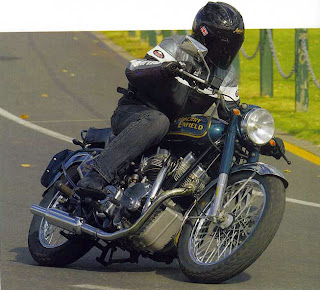 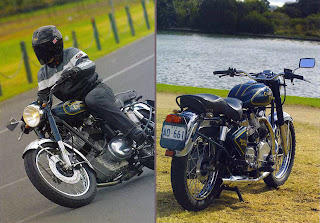 By the way Drysdale, tell you what... he made the one and only street legal four camshaft, 32-valve V8 sports bike which means you can actually buy that bike. Dont believe me. Visit his website 22000rpm. Drysdale said he found it challenging enough to work on something low-tech. He meant the V-Twin 1000cc air cooled Royal Enfield. When Paul approached Ian for the V-Twin push rod Royal Enfield project, there was a definite 'Why-would-you-want-to-do-that?' moment, but the thing is Paul is in love with Enfields. the only thing he wants to improve on it is its size. He says its a small LOVELY bike, but small and his ideal motorcycle is a V-Twin. Small as in lean in power, so adding another engine is the trick. Ian did try saying 'No' to Paul, but with no success. So they thought it will ba a basic engine with maximum Enfield parts because another company, NorCroft tried the same thing with extensive modifications on the engine and they were not successful. 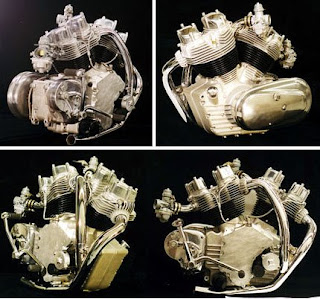 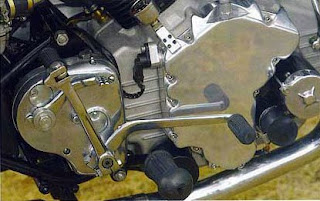 The engine is an overhead-valve 55 degree, V-twin, dry sump four stroke motor, with pushrod operation of the two valves per cylinder with a 60% balance factor, achieved by heavy metal weights plugged into the crank flywheels. The crankcases were designed by Grysdale to accomodate a pair of Enfield 500 cast iron cylinders surmounted by complete cylinder head assemblies with all originals. Although a natural 4-speed, gearing has been raised by four teeth on the engine sprocket (25T to 29T), but the future bikes for customers will be having the 5-speed gearbox. Currently belting out 50 bhp, the 5-speed with tuning should give upto 80 bhp assumes the duo. (But wait, according to Carberry's website, the bike is NOW AVAILABLE in 5-speed gear.) The timing has been a nightmare, no doubt.Also at the time when the initial prototype was made, there was no factory made electric starter from REML, so they used a local one from an Indonesian made Toyota car! But at a compression ratio of 6.5:1, the kickstart should not be hard either because the spark is from a HD Sportster CDI. 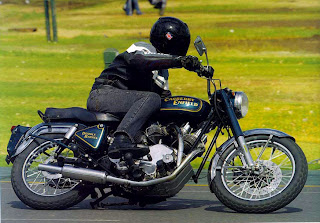 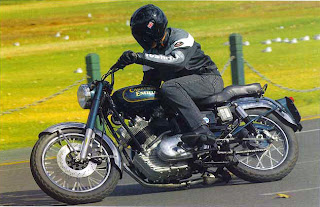 The best part of this machine is that those legendary vibrations of the Enfield... thanks to the V-Twin, they are all gone! Now I wonder why doesn't REML try that? Of course, its not supposed to be a sports bike with a 200kg beast pushed by a 50bhp engine, but a cruiser... well its more than just that. But still calling it a 'New-Age Retro' wont be appropiate. The testers said that while finding the nueutral on stand is quite difficult, you will get it easily and a lot of times while riding it. But then they also did mention that with the 5 speed gaerbox, this issue of the close bottom three ratios would be easily sorted out. As a prototype, it has been very nicely executed and it will only get better. See the vision was to give a powerful enough status to an iconic brand and the duo of Drysdale and Carberry are in the very right track. Initially Paul thought of supplying engine kits to his friends and the Chennai, India factory. But with China showing a strong interest in this low-cost V-Twin, things are changing rapidly. 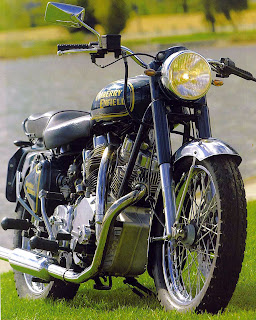 Now what would low cost mean? The donor Bullet would range in between $4,200to $5,500 with the price of modification of $11,100, which means between $15,300 and $16,600, you will be riding an ultra smooth piece of history. You can also order only the motor and frame kit for $8,500. Here is the enquiry form. Botttomline, why a age old V-Twin from Royal Enfield? Well Paul has this to say "Why do you need a double overhead-cam V-Twin roadster with four valves per cylinder that will accelerate faster and has a higher top speed than you will ever use - and will cost you a lot more in fuel consumption and servicing costs, than the two-valve ushrod motor in a Harley?" No arguments on that, now if only REML honchos take a heed to this!
Read more of this stunning custom bike in Paul Carberry's website as well as Ian Drysdale's website.
Engine: 1000cc - 55 degree air cooled V twin pushrod.
Bore and stroke: 84 x 90mm
Electronic Ignition with Electric start
Hydraulic lifters and Roller big-end crank
High-pressure/high flow oil system with Spin-on oil filter
Power: 50 hp @ 4800 rpm
4 or 5 speed gearbox