The 'Bullet' by Falcon Motorcycles 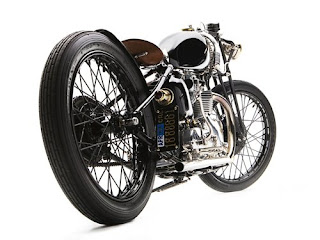 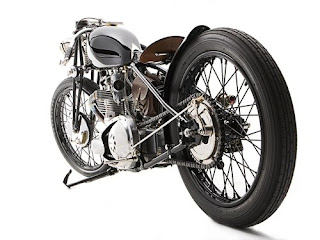 Thanks to Internet, Media and Discovery channel, the world is quite familiar with Custom motorcycles. Names like OCC, Goldammer, Jesse, Larry has become a household name. But the elite class of custom builders won’t be complete without a certain young brand that goes by the name of Falcon Motorcycles or at least you will certainly have to consider them for the future elite group. The first word coming to your mind after a look at their first product, the Falcon Bullet is a all-good-mixed bag of jaw dropping, saliva falling stunning, breathtaking, mesmerizing... and many more ...'ings'. Pristine... Immaculate and the likes are the other which also come along with it.
Falcon Motorcycles are custom built classic and vintage British motorcycles retaining the frames and engines and rebuilt entirely from the ground up. Actually, even the retained frames are remade, refurbished, customized and altered, so it’s kind of a new bike in total. The engines are also remade (or more like remachined) and re-engineered through porting and modern upgrades, so actually it’s a new bike! They go the extent of sculpting originals from raw blocks. So, to again repeat the same, these are completely new bikes. 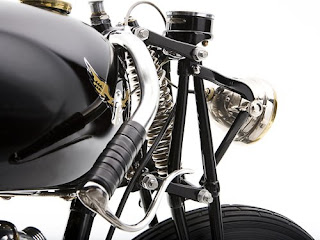 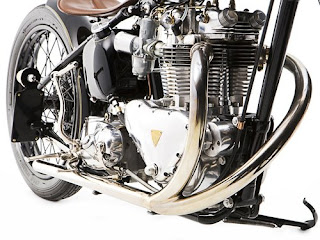 So why go through the pain of all these where as they can very well make new products that will also reduce the cost drastically? It’s called Love and Passion. Undoubtedly for British motorcycles. "Though you can see the Triumph engine or Norton backbone still framing the machine, the spirit is undeniably Falcon. The final goal is to create a wholly new motorcycle that is timeless, inimitable, and understated."
So far, the Bullet is their only completed product and that’s why I said, if not now, you will have to consider them for the future elite custom bikers. Because usually one product is not evident enough to showcase one's commitment, but this is different. With the passion they have, each Falcon motorcycle although based on the legendary British marques are surely going to be completely different from one another. 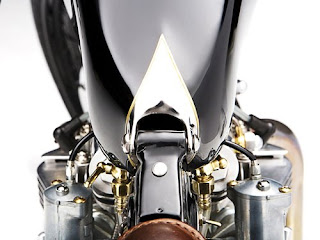 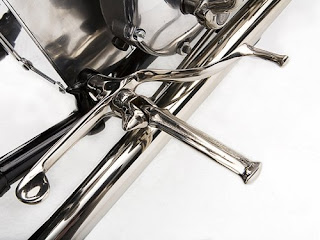 The Bullet is based on a 1950 Triumph Thunderbird and I can say, it can be easily compared to the looks of the best custom bikes worldwide.
Falcon Motorcycles is a very very young company formed in 2007. And it was only today in April that they have officially launched themselves with a brand new website and all. Falcon Motorcycles consist of Ian Barry and Amaryllis Knight. Ian has been customizing British motorcycles for more than 10 years and having met Knight at 2007 and realizing their common passion for British vintages, opened Falcon Motorcycles in Sunset Blvd.
And why name it as Falcon? Because all over the world, Falcon, the bird is portrayed as a Messenger of God and "proportionally right, precisely balanced, these animals have been perfected by nature — the fastest animal on earth, the greatest eyes in the natural world.” 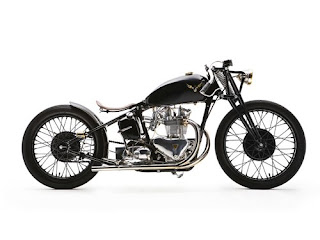 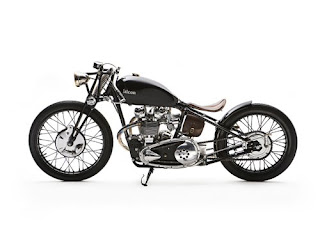 Their future products will include the Kestrel also built on a Triumph, then there is the Merlin which will bear the chassis of a Norton while another by the name of White Falcon's donor is another Triumph, the Thruxton. A very interesting thing is that all their bikes are sourced from complete left-to-die bikes that they have sourced from around the world. There has been many accessories and machinery components which have been bought again from various parts of the world and they promise, each part will find its space in one of their customized bikes. They also vouch that they will never dismember a ‘alive’ bike as it would hurt them more than others to dismantle it. Now that’s a real nice gesture. So their targets would be derelict engines from Rudge, Ariel, BSA, Norton, AJS, Velocette, Royal Enfield, and Vincent becoming a future Falcon Custom Motorcycle. 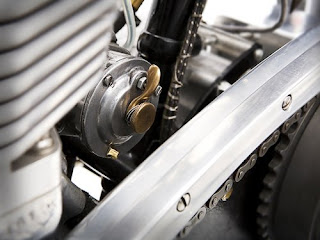 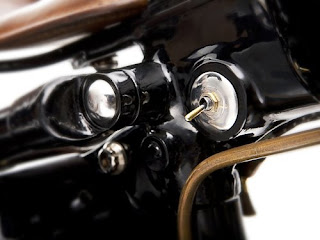 How will they do it? It’s entirely on the customer or client. However they want it, the client just need to detail it. For this, they will also be holding day long interviews with the clients to understand what kind of machine and styling the client is looking for.And that’s not all, the client will get a birth certificate for his/ her baby!!! A testimony of the meticulous process involved in restoring and rebuilding the bike, it will have its own book and manual with photographs, spec sheets, sketches, etc. Prices are not disclosed as of now, but it will be starting from $25,000 USD.
All fabrication are and will be done in-house and most of the parts will be handcrafted including the hand machined bolts. The upholstery work, (read) leather seats and bags, paint and pinstriping, plating, are being done and will be done by expert artists of their profession. There will also be performance upgrades and the use of modern electronics where deemed fit, but without disturbing the aesthetic quality of the motorcycle. 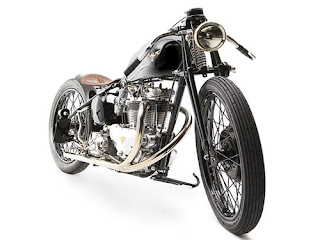 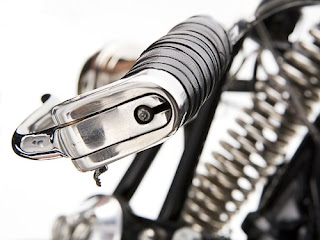 How did the Falcon Bullet get that divine shape? Surprisingly, Barry and Knight finds inspirations from most unexpected locations: “the books of Ernst Haekel; the mathematics of the Golden Proportion; the writings of Sir Thomas Moore. The shapes of squids, or insect antennae, have even been appropriated for the curve of a handlebar. The most direct way of stating the essence of a Falcon Motorcycle is the idea of Balance and Beauty through Asymmetry. There is, after all, an asymmetry inherent in a bike — the nickeled exhaust pipes run on one side, the polished aluminum brake plates and primary on the other. But when weighted complimentarily, the balance exists." 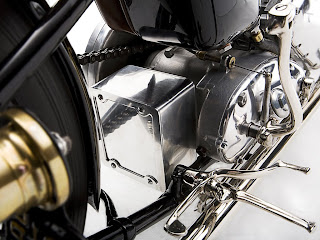 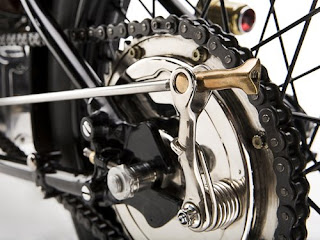 For this Falcon Bullet, Barry and Knight have spent over a 1000 hours on this project and it shows, so detailed, each and every part of the bike. The Bullet is inspired from what a Triumph Stret Tracker would have looked like. Just look at it! Most of the things are handcrafted. The handlebars and levers were hand carved from solid rounds of stainless steel. Look at the lever for toe and heel shifting. This was fabricated and adapted to the rear of the frame for a more aggressive riding position. The levers are inverted to eliminate external cable mounting apparatus and provide better leverage. The rear portion of the tank was refabricated in stainless steel. The frame was stretched 4" for a longer stance. The wheels are 21" up front and 19" for the rear. The engines were worked upon. ‘cc’ was increased 650cc to 750cc with a solid Aluminum big bore and a Bonneville head was used. The engine was completey built from the ground up. The beautiful pinstriping design was done by master pinstriper, Bill Marygold. The center fender mount was hand made out of stainless steel. Every bit you see was refurbished. It has the soul of the Falcon and the heart of the Triumph. 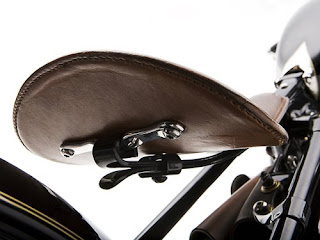 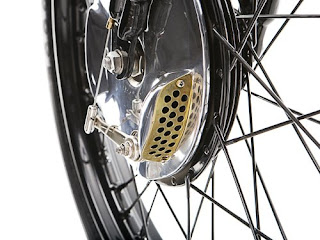 What a beauty! Goldammer, better watch out at the coming AMD Championship coz Falcon Motorcycles are surely coming to the world.

Visit the Falcon Motorcycle website virtually and see the Bullet Falcon. There is also a Blog with more photos and images in the building up of the beauty. And we can’t end this post without a note on the fabulous website. Clean and organized just as their motorcycles. Lots and lots and lots of photos, lots of information, all the pictures you see here are downloaded from the website. Kudos to Ms. Barry* for designing the website. A true Falconry!
* I was never this embrassed before. I wrote a mail to Falcon motorcycles congratulating the team on their wonderful creation. I wrote Mr. Barry and Mr. Knight. Amaryllis Knight replied the mail. Here is the content...

Hello Paul,
Thank you so much for your glowing piece about us, we feel honored and incredibly flattered that you view our work and company this way, it really means a lot to us! Please do come and visit our shop whenever you are next in Los Angeles, do you ever come here?
I am thrilled that you like the website, I have been working very hard on that for a long time now, and it is great to get that feedback. I hope you wouldn't mind if I pated your message as a reply to our "Welcome to the Falcon Blog" as a comment from you? I would love to be able to direct people to your blog as you have done to ours.
There is only one thing that I feel I should tell you -- and that is, that Ian is indeed Mr. Barry, but I am Miss. Knight - not a man. Soon to be married to Ian next spring though, at which point I will become Mrs. Barry :)
Hope all is well in your world, and thank you again for the time and care that you have taken to write this blog post and to reach out to us.
Warm wishes,
Amaryllis
Falcon Motorcycles

I am taking the oppurtunity for apologizing for my prejudiced thinking that only men are into custom designing. I really am ashamed. Sorry and ofcourse CONGRATULATIONS on your upcoming 'Biggest Day of Your Life'. You rock! Girl!