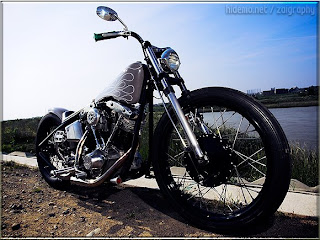 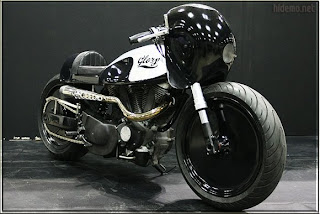 Yet another one of those magnificent Japanese Custom builders and dare I say, probably the best among all those featured here till now even though not by much. The post will be relatively short as I am spending too much time just drooling at the images. And boy! there are a whole lot and I mean a whole lot of motorcycles to drool over.
HIDEMO, short for Hide Motorcycles are basically in Harley Davidson custom building. And they are so good at it that their custom Harley won 'Best Of The Show' Motorcycle in Yokohama's Hot Rod Custom Show in 2006 and again in 2007 and was placed second last year. 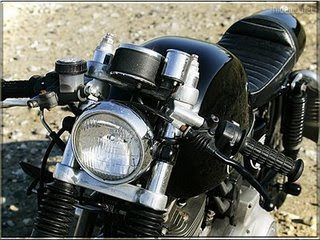 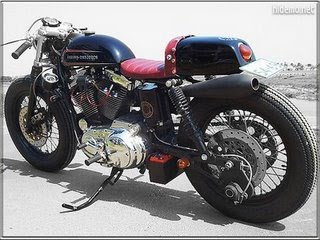 Mod Cafe 2, based on a 1998 XL1200S. It has customized Hide Motorcycle paint and the concept for this tank was an old German BMW motorcycle and an old YAMAHA D.T. trail bike. The second is Mod Cafe 1, based on a 1996 XL1200S with concept based on ols British Cafe Racers. It has original tank and fender, seat, frame meter system, muffler, oil tank, swing arm system, handlebar. Both the bikes took 3 months to build.
There bikes has also won at various shows like getting to the second place in Jammer Cycle Award 2007, second place in New Order Chopper Show at Kobe in 2009 and not to forget getting to the top ten in AMD European World Championship 2007. Now thats quite a long list of accolades. Gracing the covers of many bike magazines worldwide, their choppers and hot rods and bobbers follow the typical Japanese lingo of designing, simple but stunning.
The name of the founder (to the best of my knowledge of translation and of course with google language tool) is Hide and thereby Hide Motorcycles. 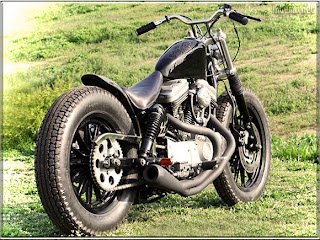 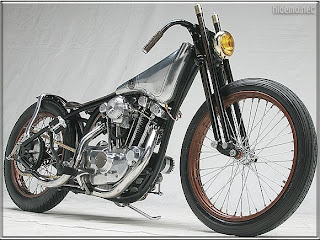 Narrow Chopper, based on a Sporster XL 1200S with a beautiful 2in1 muffler, cutting short the normal R fender, original HIDEMO paint, the frame is modified, and switches in the wiring around the steering wheel or through a simple MMB meters. The other is
Mod Chopper II, based on 1975 XLCH. Thats one ravishing in a stylish design unlike any other bike with drop handle, aluminum gas tank, saddle seat and look at the front fork's compact and simple style.
Anyway, he has been into this business for over a decade and a half and has a particular fascination for vintage American racers and he used to satisfy his initial crave from old magazines and photo books and liked their designs which he thought was "rare, warm, natural and interesting". Finally he thought of building an original himself which will have all the cultures of those vintage American racers. So he formed a team of like minded individuals and opened their in Yokohama in 2001. And that was it. What started coming out from that factory is a sight to behold, one after another, just visit the website, you just cannot ignore any of the bikes. 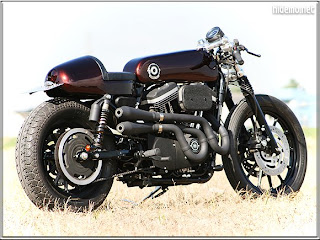 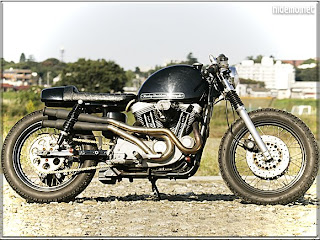 Mod Cafe 3, based on a 2006 XL883 which took 2 months to build with customized Hide Motorcycle original gas tank, seat, fender, oil tank, steps , air cleaner cover, number plate support, muffler. The design has a really clean, unique and fantastic line. The Tank logos were designed by the bikes owner. Then there is the Mod Cafe 2, based on 1998 XL 1200S with
drive chain & K & N Filter Power. Actually, the concept was derived from a mixture of YAMAHA DT series and BMW cars! Weird!
Now they are fully eqipped and has the best of machines and technology. They can make your customized dream bike exactly the way you want it. And being Japanese, they make excellent hosts. So as the webpage says "You are very much welcome to visit us any time"
With that kind of work, they are now internationally well known and has included working for different projects like Cafe Racers also and also in other brands like Kawasaki.
Hidemo is now selling a range of custom and vintage motorcycle parts for your own project which can be purchased through their website and as such you dont have to make that long trip to Japan. 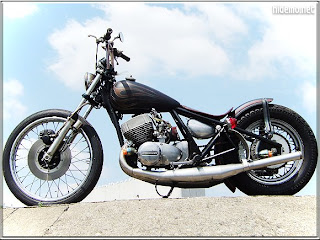 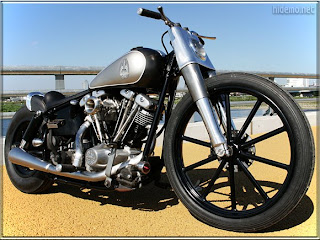 The IZO, not based on HD, but on a 1982 Kawasaki H2 (Whoa!) with customized aluminum gas tanks, which won an award in Custom Styling at the NEW ORDER CUSTOM SHOW at Kobe in 2008. The second bike is named Genuine Speed, based on 1982 FXWG, also with customized aluminum tanks and HIDEMO paint.
They have also been in recent news for a project named GLORY, an awesome unlike anything before Cafe racer, built on a 2005 Buell XB9S Lightning, if it was not for the engine, there is no way you could recognize the donor. The headlamps, the dial board, its really unique. As of now, the bike is listed as available for sale, so you jut might like to... you know! Also to add to your cause, there is a video posted below. I really wanted to post all the bikes here, but I am sure you would like to see the bikes at the website. So, visit HIDEMO for lots of custom built motorcycles and dont forget to put your eyeballs back in the sockets once you leave their website.