Spoilt with Choices! The APRILIA RS125 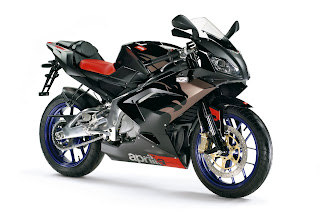 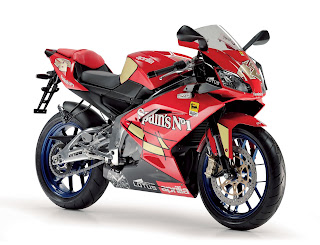 APRILIA's presence in the 125cc MotoGP is ofcourse very well known. It has recorded 8 wins, the highest number of vivtories by a team in the 125cc class since 1992 when it started racing in the 125 class., their latest victories coming in 2006 and 2007 as well. And since 2002, they have won all but one of the Manufacturer's World Championship in the 125 cc class. Even in the 250cc category, since 1994, the time of Aprilia's first World Driver's Championship, it has recorded an amazing 9 wins out of 15. Amazing! And in both the categories, their beasts are 2 strokers. Well, while for most companies, this doesn't ammount to much in terms of production bikes, but for Aprilia, it definitely ups the ante as they still produce street legal 125 cc 2 strokers.
Of course, we are talking about the RS125, this is a GP-bred track bike which has for time outclassed larger displacement bikes. Just think about a few things. This is a bike with GP genes, just like the R1 or CBR which translated into speed, agility and superior handling and then comes the bonus, its a super-light-weight motorcycle, which means even more easier handling. 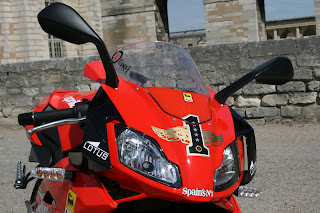 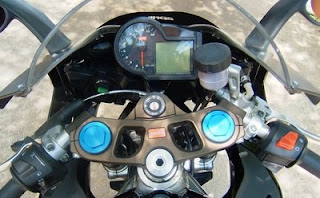 What better choice can you get than this? Of course, its also Italian which means mesmerising design and top class finish and also high level of premium components. Well, of course it does come with a price, but then, you did expect that, right!
No doubt, Aprilia is the leading manufacturer in 125cc and 250cc MotoGP competition, they has perfected the art of engineering championship-winning race bikes.
Aprilia's race proven technology has converted into this RS 125, a sophisticated single-cylinder two-stroke, liquid-cooled engine. The highlights of the engine are a highly advanced crankcase reed valve intake, anti-vibration balancer shaft and an automatic fuel-oil mixing system all complimented by a superb 6-speed transmission system. Keep on adding one racing feature after another as it also has race-style, upside-down front forks and a hydraulic rear monoshock mounted in a rising rate linkage, aluminium alloy wheels, radial mount brake calliper, and rear-set style racing footpegs. 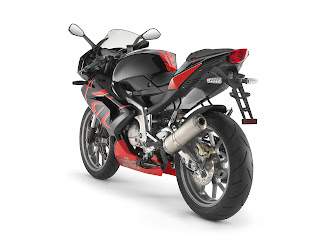 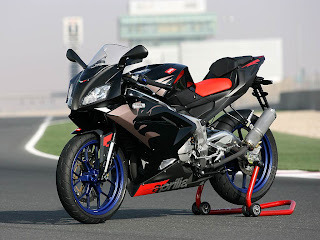 The entire chassis is very light, thanks to the polished cast aluminium twin spar frame which is reinforced with cross ribbing for additional strength while the advanced chassis is mated to a box section, aluminium alloy swingarm. Yes, it is a GP bike, no less. The design is very racing inspired. Mainly the fairing and the tail section which has a wind tunnel for dragging very ably aided by that beautiful wind screen. Its totally sleek to a T.
While those of us who have never ridden on a GP track will definitely find the bike as a real sport, even for those riders, you will definitely find a smile in their faces once they get the throttle. Its made for every bike enthusiast who has even a little bit of racing gene. It will not overwhelm a newbie and will always please an experienced rider. 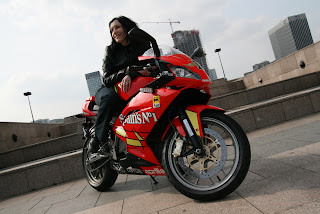 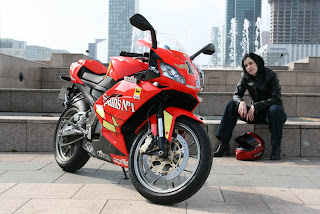 Its like a only-track bike which have been approved for street riding. And dont worry about Mother Nature! This 2 stroker is Euro 3 compliant. Aprilia first introduced the bike in 1992 as RS125R, the latter R of course standing for Racing. It dropped the R in 1996 and although there has been a generation of RS125s, most of the changes are only cosmetic and none in the engine except minute here and there. In 1999, Aprilia also released the RS125 Tuono, a semi naked version. The Tuono was hugely successful. Aprilia also released the RS125 Pista in 2003, a limited edition track-only motorcycle with special, hand-made carbon/Kevlar exhaust, track bodywor which weighed only 107kg and had a maximum power output of a whopping 33bhp. 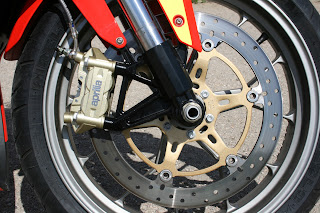 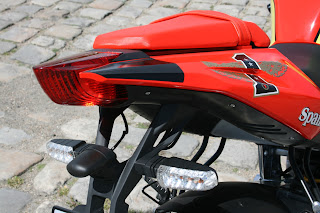 Of course the regular RS125 weighs 140kg and has a 15bhp churning machine. Just for the record, the Moto version weighs only 80 kgs and although there is no official record of its power output, it is estimated at 26bhp as far as I remember, I read it somewhere, so correct me if I am wrong.
And now, Aprilia has released a new version of the RS125, "The Spain No.1".
This is a GP replica with a double optical streched body and the rear similar to the GP bike. Looks have alays been a forth for Aprilia models and this version looks even sexier. Critics are saying the plastics and finishing are even better. I dont know if thats possible, but then... they have said it. Other small details have been added like deflectors in front. Equipments are all that are present onthe GP bike ,along with a minimum dashboard having a tachometer and a digital screen that combines a speedometer and temperature. The petrol gauge is absent although you have a researve indicator. 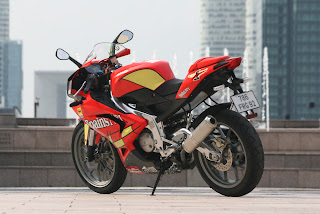 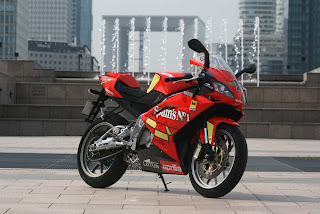 The tank is unchanged and still can load upto 14 litres and here is a small difference from the GP bike, the cap remains attached to the body of the shell. And also carrying its racing lineage, the seating posture is very very sporty. With a seat height of 805mm and a small saddle, your bum is gonna hurt, but you did want a race replica, didn't you? For your comfort though, the seats are extra padded. So there you go and stop grumbling. Knee rests are similar to the race bike. The handlebar is well position to allow your elbows kick back. The adoption of an aluminum perimeter frame takes away 5 kgs from its predecessor. Just like the racing bike, you get adjustable hydraulic fork (40 mm) and brakes of 320 mm size in front and 220 mm in the rear. Probably not the most handy bike for town because more than the sitting and riding position, the engine has been tuned in such a way that the mid range torque is where all the action is. Or probably because its a 2 stroker, one always expects it to blow away even from standstill. Enough maximum speed in excess of 150kmph, the maximum bhp is @ 9000rpm. 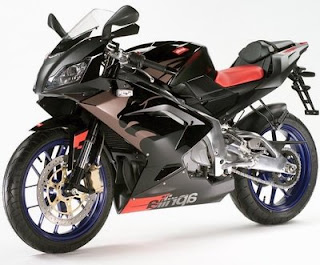 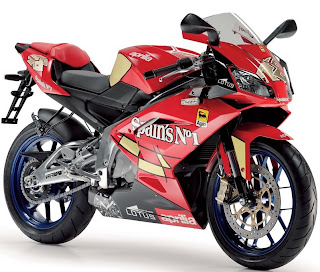 More than anything, Aprilia knws that the bike is more for recraetional use than a begginner's bike. At $5499, almost $1500 more than its competotirs, hardly would any begginner start on the RS125 and so Aprilia knowing its customer has made the bike with the finest quality with no compromise whatsoever. It has its own unique marque in the biking world which is very different from the YZF R125 or CBF125.
With a constant decrease of 2 strokers, these bikes are currently gaining importance with high resale value. Whether 2 strokers will survive or not is questionable, but the fun one can have on 2 strokers undoubtedly is much more than a 4S. This is definitely an endangered species and Aprilia knowing this is playing the card for those who still have a chance to buy a factory made 2 stroker. To repeat myself, it is intended for recreational use and for Aprilia and 2 stroker fans wanting to have an exclusive machine, a 2 stroker mass produced bike from the factory.
To know more about the RS125, visit the Aprilia website and this Spain No.1 version is seen in the Aprilia USA website. Source of photos have been various from the net and some from Moto Caradisiac 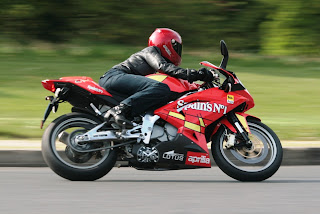 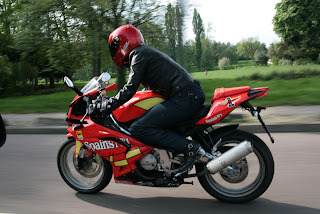