VINCATI - A Hybrid Beast of The Best

If you believe there is a way, then there is a will. Words we have heard from our father and many elderly gentleman trying to motivate us in life, but what if the way you think just might be considered too fictious, will there still be ‘A Will’? Well the Biberman’s think so that no matter how big you dream, all it needs is a will. And probably the heart and guts to carry forward your dream. What we have here is literally ‘Best of Both Worlds’. Or how else would you put about a motorcycle that has the heart of the worlds greatest ever motorcycle put in the skeleton of one of the greatest designed bike? “Engine by Shakespeare, chassis by Michelangelo,” says Matthew Biberman himself, the designer. To cut a long story short, this is the VINCATI, yup! A VINcent and a duCATI hybrid. The greatest ever bike brand and the most beautiful bike brand, so did I get that right? I am sure for those who haven’t heard about this bike, there are quite a few raised eyebrows. And yes, it totally looks stock and that the hallmark of a well-conceived and properly executed dream project.

Sid Biberman is also known as ‘Big Sid’, a legend in creating Vincent motorcycles. His son Matthew is a college professor. The team of Sid with his son Matthew have put together this beautiful Vincati special combining the frame from a 1973 Ducati GT750 with the engine from a 1953 Vincent Rapide. Incidently both the donors were meant for other projects, but as they say, destiny, bought then together. The frame came from a racer that was completely rebuilt and restored and a engine was to be installed in it. And the engine came from a friend of the Bibermans who had used the Vincent frame on another project.
Just to think about it will give jitters to many a custom builder because putting that massive Vincent engine in a lithesome Ducati will get your head scratching, no matter how experienced you are. Of course it was far from easy for the Bibermans. For that reason, the Vincent engine was used as a stressed member with some additional bracing and the entire engine is visible. There was probably no other way to do it either. The whole process was very complicated which also included removal of the GT frame’s front downtubes. And that engine you see is not a original Rapide. On the contrary, it’s even powerful after the Bibermans got some friends help them in upping it’s performance. 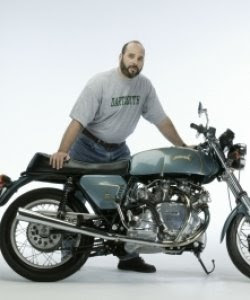 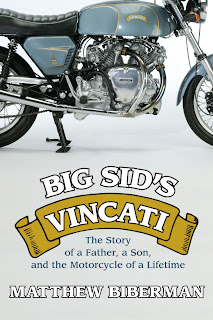 And it even has a electric start hidden beneath the engine. But of course, the kick lever is also there to help you start the dream on cold mornings. The bike is rideable and if you see the video, you will see Matthew riding it. It’s not a showpiece and the duo designed it as a tourer, so probably we can call it a Vincati GT! And if you think we are just talking, then you might be interested in knowing that it is capable of speeds up to 225 kmph! Peter Egan was the lucky buster dude from Cycle World who got to ride this 998cc Vincent V-Twin dream. The bike retains the Ducati instrument pod with Miller ammeter in the center and a old tachometer has been replaced for the new one. Although parts of it look very British like those typical choke and ignition levers on the handlebar, but overall the Italian Ducati look is retained. This is a very very modern motorcycle probably with a touch of old classy blues although look wise it is a very seventies bike.
Vincents have undergone hybridization with some other brands (like the Norvin for instance) but I have never heard it with a Ducati. This has got to be the only instance and if it’s not, we all would surely like to know such other projects.

The third photo shows the work place of the Bibermans where this dream was created. Along the Vincati, you can also see a Black Shadow and a custom-framed Egli-Vincent café-racer. The last photo in B&W shows ‘Big Sid’ (second from left) among the Vincent Boys. Classic!As far as I have read, this is the only bike the Bibermans have built so far, but on request, they can offer the same to 10 more high-end customers. And how high is this high-end? Well, how about a price tag of $100,000? I know, it almost equals to those vintage ‘original’ auctioned bikes and you could probably get 3 Vincents or 5 Ducatis of the same era, but you won’t probably get a Vincati that looks so neat and has a factory produced stock look. Matthew has put words to his dream creation and penned a coffee table book “Big Sid’s VINCATI. The Story of a father, a Son and a Motorcycle of a Lifetime”. Critics have hailed the book in high esteem and compared to as one of the best written motorcycle books and it’s available in the official Big Sid website for $25.95 and in Amazon for $17.19.Source of Photos: Cycle World. You may also visit Big Sid’s website for more images and info.