In The News - Goodwood Festival of Speed Last weekend (3rd to 5th July), Peter Fonda recreated his Easy Rider magic at the Festival of Speed at Goodwood forty years after he rode ride his custom chopper 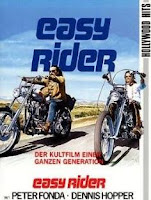 in the Hollywood hit Easy Rider and this time, instead of the long desert roads, he rode up the famous Goodwood 1.16 mile hill climb. The Goodwood Festival of Speed, started in 1993 by the present Earl of March is an annual hill climb, featuring historic motor racing vehicles that is held in the grounds of Goodwood House, West Sussex, England. Although the focus is mainly on cars, vintage, classic, supercars, Motorcycles also make up a key part of the weekend festival. Around 40 important machines gather at the Festival each year, with entry by invitation only from Lord March. The field is selected thematically, with the motorcycles chosen specifically to reflect the event's major themes, and many are ridden by famous names. The theme for this year was 'True Grit - Epic Feats of Endurance' to showcase and celebrate the heroes of motor racing who overcame the impossible in terms of physical, mental and mechanical hurdles in their pursuit for glory. From the likes of Jackie Stewart who drove to victory in the 1968 Grand Prix with a broken wrist to Mick Doohan's return to motorcycle racing in 1992 without full use of his right leg, tales of legends, and the heroes that emerged is what this year's Goodwood gathering celebrated. Celebrities, superstars, legends like Carl Fogarty, Barry Sheene, Wayne Gardner, Mick Doohan, Freddie Spencer, Eddie Lawson, Giacomo Agostini, Luigi Taveri, John Surtees, Jim Redman, John Reynolds, John McGuinness, Troy Baylis, Troy Corser, Randy Mamola, Scott Parker, Paul Smart, Mick Grant and Marco Lucchinelli have all competed at Goodwood in recent years. 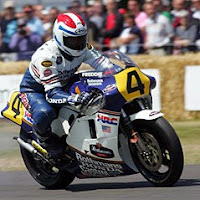 Most importantly, the machines you see ridden up the hill are, almost without exception, the actual warriors, many of them works machines which won the honours in their day. Nowhere else will you see a collection like it. From pre-war Kompressors to post war Italian exotics; from the Great British specials to the two- and four-stroke kings from Japan; a broad spectrum of ultimate motorcycle racing history is illustrated.
Out of the many events, the 'hill climb' is one of the premier attractions where vehicles race along a tree-lined avenue and turn to pass in front of Goodwood House, before climbing a steep and narrow estate road past flint walls and dense woodland groves, heading towards Goodwood's equine racecourse on top of the magnificent South Downs.
Source of infoa nd photos: Goodwood Festival of Speed