Get a Hyper Life with DUCATI Hypermotard

I have always believed and at least to me, there is just no bike that could match the fun factor of motorcycling like a motard. This breed if pure adrenaline, nimble and light, agile, easy to handle and the twists and turns come so easy. The European motorcycle firms have been pioneers in this and the likes of KTM and Aprilia basically started out with these kinds of bikes. DUCATI although more renowned for their sports bike seem to be making a strong resolution towards this breed. But DUCATI always does things differently and so they invented the Hypermotard category, a crossover hyper-sports bikes and supermotards which means you will get the high speed handling and smooth engine from a hyper-sport bike combined with the lightweight credentials and slow corner precision of a supermotard. Which also means this is going to be an easy to handle agile motorcycle for city traffic and the weekend spirited ride through the mountains. 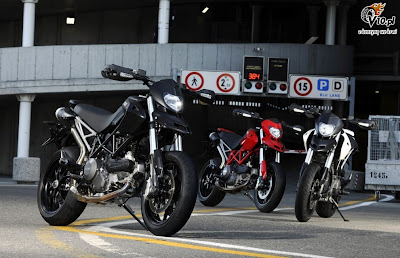 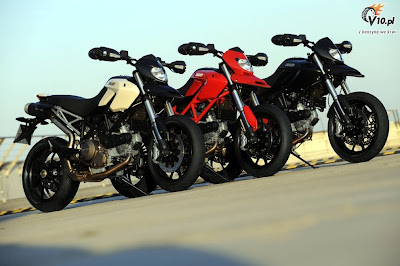 The fun part is bought on by the ‘feel’ of the lightweight and taut chassis which makes it a better ‘chance taker’ than a sportsbike. No wonder most of the stunt records are seen along with this breed.So coming on to the Ducati Hypermotard, they had the big 1100 engine but how cool can a motard be even if you call it Hypermotard with such a big engine? So, Ducati went and launched the smaller 800cc version dubbed 796. Now this is more like it! The first thing that grabs you in the 796 or for the fact in most motards are the massive front forks that immediately builds your confidence. The 796 finishes off with the Ducati signature single-sided swingarm and underseat exhausts and typical of Ducati and while motards are definitely not the best of lookers, the same just doesn’t apply to the 796. Just the look and colour tells you it has got to be a Duc! And if it is Ducati, it has to be brands like Marzocchi and Ohlins and Sachs. 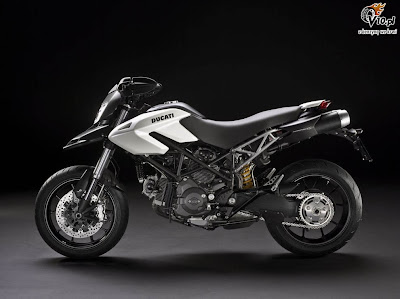 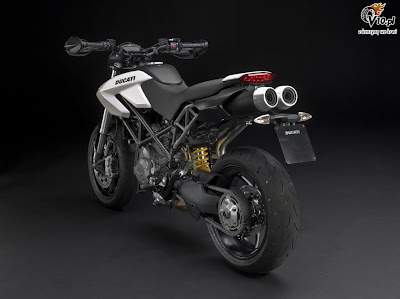 In 2005, Ducati entered this category with its prototype and since it is a Ducati and they had to bring in the Hypermotard segment, they had to introduce something new and thereby dumped the single engine usually found in motards with their legendary L-Twin engine. Although this would add to the weight but it had more advantages, like the lack of the harsh characteristics of a single cylinder engine and also it makes more power. Another thing is that while it won’t be very practical to ride a motard everywhere and everyday, the Hypermotard is just that. It infuses pure riding pleasure with a practical and versatile motorcycle that could be used every day. The Hypermotard’s main advantage is of its agility to accelerate at any range which sometimes gives you the impression that it actually it a 2 strokes of the 80s from the crazy Japs. 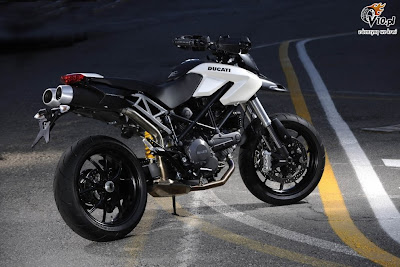 First came the 1100 and for this year, Ducati has launched the 1100 EVO which is even better than the 2009 model because it weighs 15 pounds lighter and at the same time delivers 5 more horses and so officially power output reads at 95bhp@7500 rpm and the bike weighs 175 kgs. The new torque curve peaks a little higher in the rpm range which has enabled Ducati to achieve a flatter and longer torque surge. There is also the EVO SP version which weighs 2 pounds less than the EVO and adds another 5 horsepower. Also the EVO SP seats higher by 1.2 inches than the EVO and to compliment the height, uses a handlebar which is 20mm higher than the EVO. But the 796 was actually built on the learning from the 1100 and so in many terms is a step ahead of its bigger brother with better air box design and better oil cooler. Actually the 796 gets an all new Euro 3 engine revamped on the Ducati Monster 800. 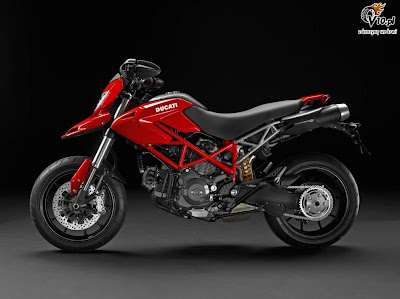 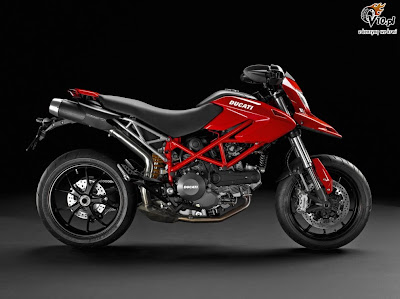 It is just not tweaking the Monster’s engine or just increasing the displacement to 803cc (88 x 66mm) over the Monster’s 696cc (88 x 57.2mm), but even the pistons have been redesigned with new crown shapes which raises the compression ratio, new narrower and lighter crankcases and also a new flywheel. All these thing helps reduce weight of the Monsters 696’s engine. The big news here is the performance. The sweet L-Twin will belt out 81 bhp and 7.7 kgm of torque. Such figures to go along the 167 kgs bike will almost match its power to the bigger brother. But think about this, this is going to be at least a little easier than the 1100 and of course the price is also less. Among other differences, seat height at 825 mm is 20mm lower on the 2010 Hypermotard 796 and the chassis has been developed further which in the larger picture means that the 796 will be much easier and probably better to ride than the 1100. 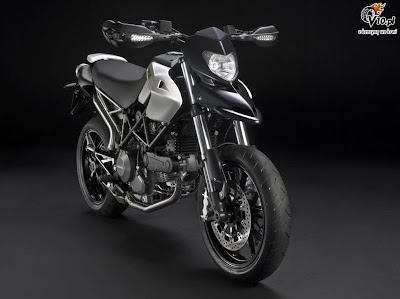 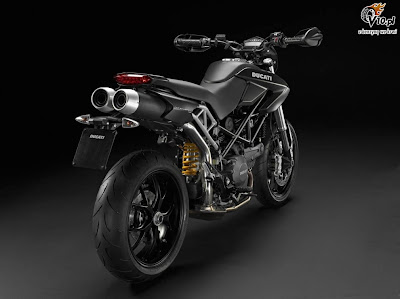 And it is not just the chassis and air box and oil cooler, Ducati has developed the wet clutch with slipper action that will prevent rear destabilization when you aggressively downshift the bike. Features like these add a lot to the overall rideability of a bike and from reports the 796 is just that. Very cleverly, Ducati has kept the compression ratio high (at 11.1:1) while revising the entire bottom end to give that kind of performance steroids. A large airbox is complimented by a new Siemens ECU, dual Lambda probes in the exhaust headers and catalytic converter in the midship exhaust collector all add up for the 796’s claimed 81 hp along with a claimed 51.5 mpg. Now that is having the cake and eating it too. More power and yet better fuel economy than the 1100 or the donor 696! 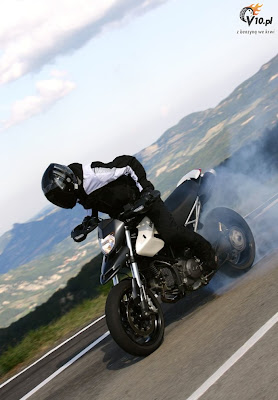 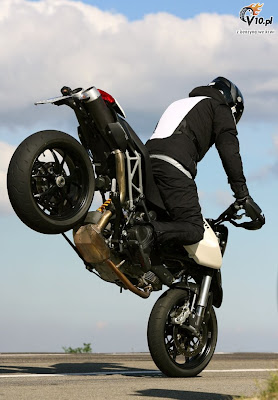 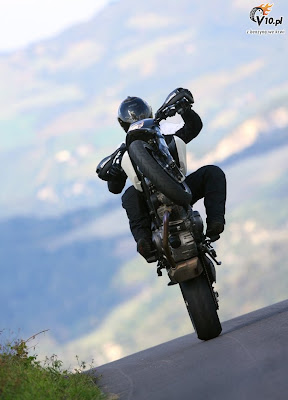 Other areas where the 796 scores over the 1100 is the forward-positioned saddle which is more user-friendly than the Hypermotard 1100's towering stance. And with the reducing seat height (which is done by decreasing the padding which means sacrificing a little bit of comfort), you can firmly touch ground with both feet even if you are of average height. Incidentally, an aftermarket "comfort seat" will be available for the 796. But actually it is the 796's combination of a broad powerband, light weight, and shorter gears makes it feel better than the 1100. And the configuration gives the 796’s air-cooled engine usable power at nearly any rpm. The small but nice looking instrument panel offers digital rpm, speed, trip info and lap times. Other things on the panel are time, oil temp, battery voltage, fuel reserve trip, scheduled maintenance, warning lights for neutral, turn signals, high-beam, rev-limit, oil pressure, fuel reserve plus immobilizer system. Phew! Incidentally, the instrument panel and the switchgear come courtesy the Streetfighter. 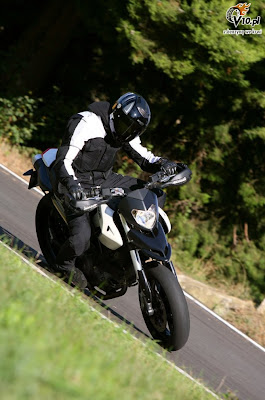 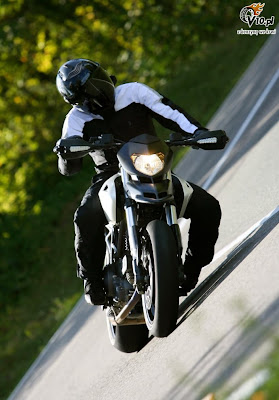 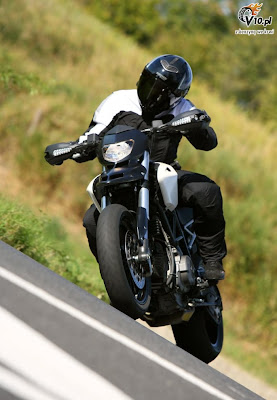 The Hyper 796 has more than enough going for it to satisfy all kind of riders except maybe the track riders. And you just cannot look for a better bike than the 796 if you want to join the Ducati club, after all you are getting a Ducati in less than 5 digit money figures. Ducati has done everything possible to put this bike on the world map and that’s saying a lot considerining Ducati extremely high values. They have given a straightforward and powerful bike with the traditional Ducati heritage, a bike with impeccable road manners and just to repeat, excellent handling and maneuverability, thanks to the precise steering but rock-steady chassis.The 796 is priced at retails at a price of $9,995/ £6,995 for the matte black version and $10,100/ £7,195 and for the Ducati Red. The 1100 Hypermotard starts at $11,995 price tag which jumps to $14,495 for the higher spec. Visit the DUCATI Hypermotard website for more info. 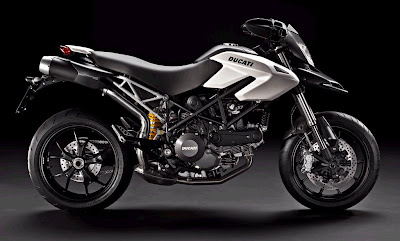 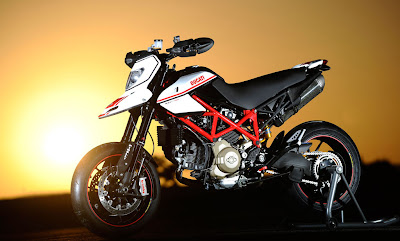 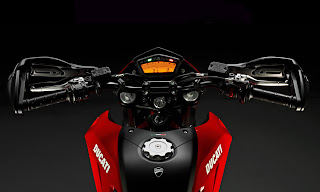