The Hundred Roadster from WAKAN

WAKAN has a special place for this blog as it was one of the very first posts, to be precise; it was the second post of the blog. Now after 200 odd posts, this is the second post on the firm from France that makes only a single bike, but what a bike!
Well, the first post was on the WAKAN 1640 and this is all about the Roadster Hundred. Basically it is the same bike but then it is not. The engine size and lot of specifications are same but this is almost a new bike. Joël Domergue is the man behind the movement of WAKAN. The Roadster is his creation as a tribute to American Muscle cars and particularly the Shelby's AC Cobra. The Roadster is powered by the American company S&S and its V-Twin engine displacing 100 cubic inches.
At the last EICMA, the bike received a very positive and enthusiastic reception. No doubt the bike looks fine in its naked styling and brawny looks. Fit and finish is high class and what adds to the bike’s overall look is the minimalist execution and of course you can make out that this bike has been hand-built. The huge massive S7S engine forms the heart of the bike and its appeal. Look at the monster exhaust. All finish in fine silver colour with the black left panel cover adding to the appeal. The very stylish tank and the overall curvy frame end with a nice minimal tail section. The handles are clip on and in between you find the fully digital console. 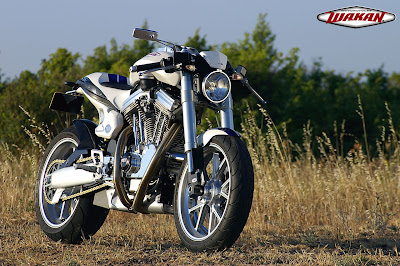 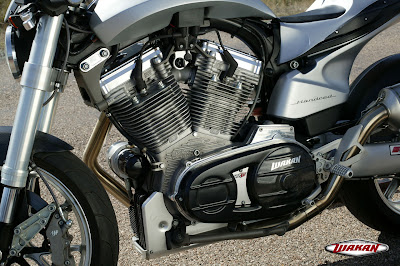 Take a look at the first picture. The bike with the single naked round headlamp and a small wind screen looks ready to pound or jump on you. WAKAN, means "spirit in ours" according to the Lakota Sioux language and is used as a sacred word. And that thing ‘spirit in ours’, is literally translates to ‘ours’ like in ‘our world’. You see, this is a ‘world’ product. I really don’t know what a ‘Andrews’ transmission is and particularly what a ‘Gates’ belt drive, but whatever it is, it sure looks nice! I am sure the Andrews and Gates thing are from U.S just like the S&S motor. Add to it, the the 41mm Keihin carburetor from Japan, then add the Italian components like the forged-aluminum Marchesini wheels and 46mm Ceriani inverted fork and everything gets together in France, so you se this is a world product. The TIG-welded chrome molybdenum steel-tube backbone supports the S7S motor and doubles up as an oil tank. Just like the 1640, the fuel tank is below the seat, molded to double as a sort of rear mudguard with the filler mounted on the tail section. Intake air enters through a supercharger muzzle a top the airbox disguised as a fuel tank, which feeds the carburetor. The wheels are forged aluminium Marchesinis and the meaty swingarm is made of aluminium alloy. The bike rides on 17-inch wheels, shod with 120/70 & 180/55 Michelin Pilot Power rubber at the front and rear respectively. If you have gone through the Wakan 1640 post, you will notice lots of similarities. The Roadster 100 is may be fitted with the same 1,640cc, 45-degree v-twin as all other Wakan machines, but power output has been increased from 115bhp to 120 bhp at a lesser rpm from 6,250rpm to 5750 rpm. Also the torque figures are more healthy at 165 Nm from the previous 156Nm at the same rpm figures of 4250. What this means is definitely more ‘usable’ power at even low rpm. The clutch is dry and the machine makes use of a dry sump. The bike weighs 177kg dry. 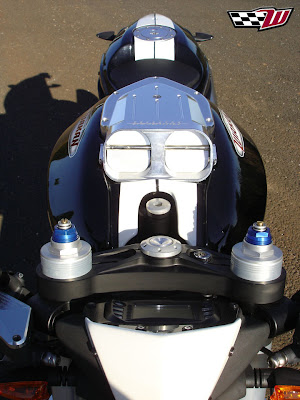 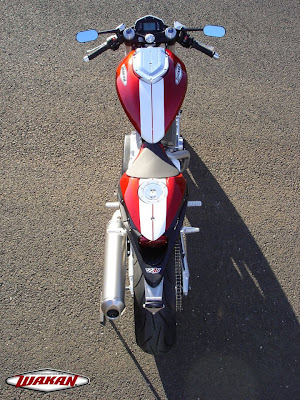 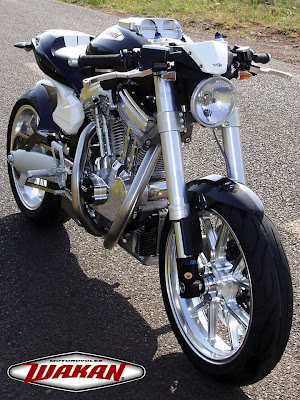 The engine has been balanced to in a manner to negate vibration and to help them are the bar end weights. For some critics, braking was in question last time around too just as it has been with the Roadster. You see this is a monster bike with a 1600 plus engine and 100 plus bhp of power. So why is Joel still providing a single disc on the front is not really well known. On the first series, Alan Cathcart said it was “OK” . Another thing was the lack of Fuel injection. It was missing then and although Joel mentions that there is a possibility of the Roadster getting a FI, at least for now, it will stay carb fed. Cathcart mentioned the first series of bikes performance is similar to the Buell Firebolt XB12R but a step up, so expect the Roadster to be several steps up in that front. Performance wise, the engine can hit out over 150mph or 140kmph, but the thing is that this is a roadster with no fairings, so it will be better that the rider for occasional spell only presses on the full throttle. Actually even knowing that your bike is capable of something like that does get you on a high, doesn’t it? Just for the information, the claimed top speed is 250kmph or 156 mph. And all this figures are on the lowest state of tune. So the good thing or better part is that there is more to extrude from the engine and also Wakan will provide a range of factory-fitted modifications including exhaust systems, including the necessary fuel-map and ignition-map adaptations that are available to suit the owner’s wishes. 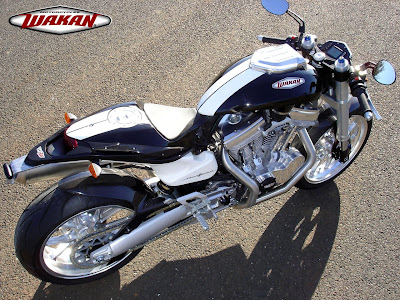 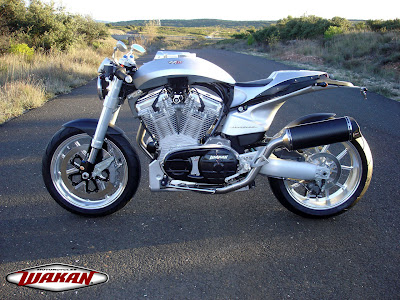 Looking back, Joel Domergue has started out with Scorpa, a company working on trials motorcycles but he gave up his job (actually sold off Scorpa) to start WAKAN and started out with the 1640.
The bike comes in four colours, Black, White, Red and Silver, but Every Wakan Roadster can be personalized to the colour scheme preordered by the owner. It also comes with LeMans Legends white pearl and royal blue stripes. The targeted market is the U.S where Domergue figures to sell 75 percent of the limited-production Roadster. It is Euro 3 complaint but according to the website, it still has to get EPA/ DoT approval and as such the buyer from U.S would be responsible for the registration for on road purposes. As for the pricing, now that is something. The 1640 was costing $35,000 which was priced for the initial 15 bikes and was expected to get lower with more production. The Roadster is going to cost you dearly at $39,000 and whether there will be a subsequent fall in the price is not known. For a nicely styled machine with an S&S motor, the price does seem somewhat justified, but this is entering the Agusta and Ducati territory of high end bikes. Actually it is not entering, it is in that territory. Look back at the motorcycle with all the components and high end parts and the price do seem to be justified giving its custom status. So just for the lack of a disc brake and FI, don’t let it dampen your spirits, if you have the money, the WAKAN Roadster is definitely worth it. And if you still donot feel convinced, I am sure you have not seen video for if you did, just the sound of the bike would have tempted you to call up Mr. Joel. 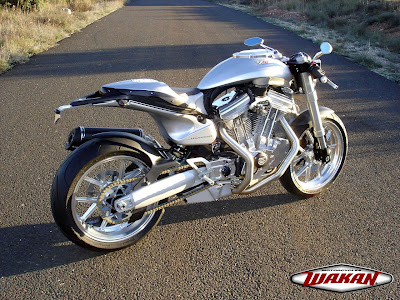 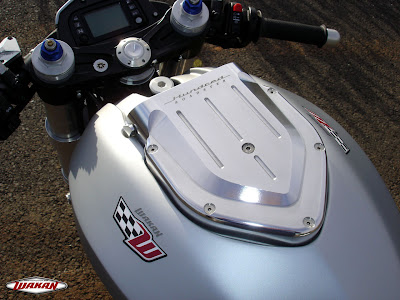