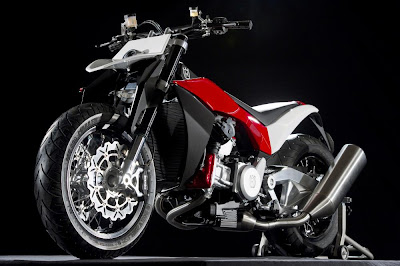 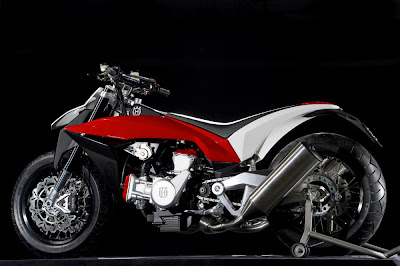 The current hot news in the world of motorcycling is of course the EICMA in Milan Italy that got concluded yesterday. By now you must have known about all the latest machines from the Diavel to the new Daytona. Anyway, for those who attended the EICMA, some of the biggest buzz came from relatively two smaller players, Benelli and Husqvarna, small in terms of production and not small in terms of magnitude anyway. While the Diavel was expected as was the new range from Kawasaki and the Honda Crossover among others, what surprised the visitors was the Husqvarna Mille 3. Husqvarna is more known for their Motocross & Supermotard and currently doesn’t have any street or orther bikes in production. So it was rather surprising to see this unique three-cylinder concept motorcycle dubbed the Husqvarna Mille 3 Concept. Husqvarna has fused three dirt bike cylinders of 331 cc singles mated to a common crank to develop the mill displacing 993cc. It is actually a V3 or V-triple, but you get to see it as a twin but that too from far looks like a single and the other one is almost hidden. That is because there is a vertical cylinder and the other one actually having two cylinders. How it performs, as of now beyond the point as it is shown as a prototype just to display what Husqvarna is capable of and the office mentions that it has no plans for production as of now. The design cues are very reminiscent of its dirt and motard line.
The styling is most definitely Husqvarna. The bike has a low-slung chassis which will make you recall Husqvarna central "tubone" design, the single-piece tubular form, spoked rims matted to fat street tires, double rear beam, with aluminum stays fitted to the outside of the chassis uprights. The wheelbase is long, and the seat height seems ideal for daily riding. But then again, the rearward position of the footrests along with the kind-of off-road handlebars make the riding position an aggressive one and in total gives you the impression that this bike has an attitude of a street dragger cum go anywhere bike. According to Husqvarna, the Mille3 is a "concept study demonstrating Husqvarna's ability to design with highly diverse technical solutions, creating a dynamic and seductive contrast.” As of now, this Swedish firm, owned by a German firm (BMW) and having its base in Italy is probably judging the people’s view and of course they are getting a lot of press which is anyway a good thing since the likes of Husqvarna (read companies into dirt and motorads) do not make many headlines in events or expos. But then, should we not wait for some time because I do expect that certain piece of good news and opening of a completely new genre. 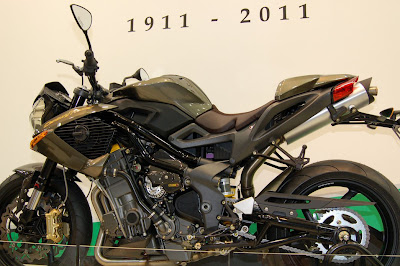 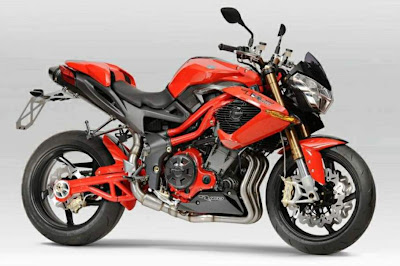 Benelli, the Italian firm, now a days more known for its high priced up market niche products was established in 1911. The brand which gave the world ‘The Sei’ will be completing 100 years or rather hitting the ‘Century’ in two months time. To commensurate the grand occasion, Benelli decided to celebrate the anniversary with some interesting new products on display at this year’s EICMA in Milan, Italy. Among the products, the bike which made the most rattle is the TNT Century Racer. The bike carries the genes of the 899 Racer TNT with a new frame and the new ‘Centenary’ colour. TNT, as you would be familiar stands for Tornado naked Tre, Tre standing for its in line three engine.
The TNT 899 Century Racer will replace the TNT 899 (regular in white and red colours) by the first quarter of next year. The outgoing model parts that will continue include the front Marzocchi 50mm fully adjustable black anodized shocks, disk brakes with Brembo radial calipers (320mm front and 240mm at the rear) while at the chassis, there will be the addition of ZF SACHS rear shock, fully adjustable and a change to the mapping unit.
Another addition to its portfolio includes the R160 that was also showcased last year at the EICMA. The R160 has already made it to the company website with its striking red colour with its matt titanium frame. The new TNT R160 will also be available in February 2011. For the 68th edition of EICMA, Benelli also unveiled a new scooters, Mace CaffèNero 125 and a bigger 150 cc version.