In The News - 2010 Bikes from YAMAHA & DUCATI, RSD Sportster Kit

Starting with the RSD Sporster Kit news, although you do have to wait till mid 2010, good news is that the new Roland Sand Design's kit will make your Sporster even more dashing without burning your pocket. My good friend Chris Hunter, editor of BIKE EXIF has recently posted the news on RSD Harley Cafe Sportster. It seems as not to hurt the Sporster lovers and goeasy on the pocket, Roland Sands Design has put together a step-by-step combination of modifications. The kit will be on sale soon and by 'step-by-step, it means Sportster owners will be able to buy the parts in stages to spread the cost. Chris mentions that "The basics will include pipes (built by Vance and Hines), moto pegs, and a coil and key relocation bracket. Also on the list are wheels, some very slick brake discs, a new pulley and a fork brace. At the moment, the café seat, gauge/headlight relocation kit and velocity stack are still at the prototype stage, but they should be in production by mid 2010." 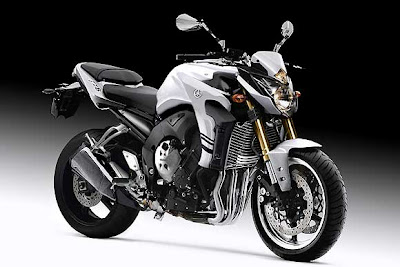 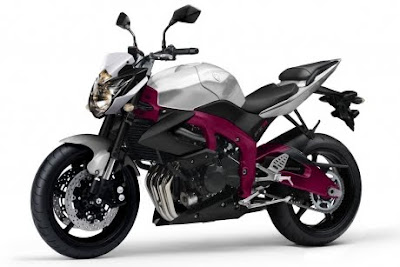 These are computer generated image of the YAMAHA FZ8 that is going to be launched very soon in Europe. Some time ago, YAMAHA MOTOR EUROPE has posted a picture of a new Yamaha Motorcycle, FZ8 which was supposed to be launched by November or early December, but now, the website says just wait for the updates. Which means the FZ8 is definitely there but just take might take some more time. The website just shows the headlamp of the FZ8 and that is sure that this will carry forward the Fazer/ FZ motto of a street bike. While all the waiting has been done, some moto journalist just couldn't wait any longer has come up with their own versions of what the FZ8 just might look like. Of course it is going to be a in line four, for one and most definitely liquid cooled. The journos have given the bike a mode edate look than the existing series. Where the FZ8 really stands is difficult to say as they have the 600cc and the litre bike. This 800cc bike is probably looking for the crowd who wants a more road bike than a street racer and also that could be used for touring and clearly as the Motarrad website mentions will take on the Aprilia Shiver 750, BMW F 800 R, Triumph Street Triple and the likes. The site also mentions that the FZ6 will be phased out by coming March. The photos here will remind you of the FZ1 for sure. especially the frame, the tail section and tank while the second photo from Motorevue has gone a step further is colouring the bike and giving it a R6 like tail section. They have imagined the bike in purple colour decoration with white superstructure somehwat similar to the R1 which means they expect a more sportier bike.
Well, we have to wait for some time more before we know what actually comes out. Keep updated with the Yamaha Motor Europe website. 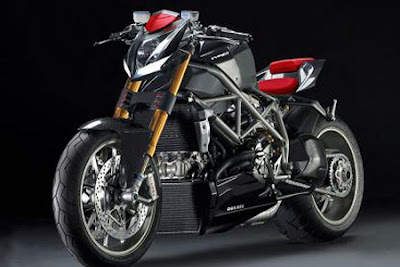 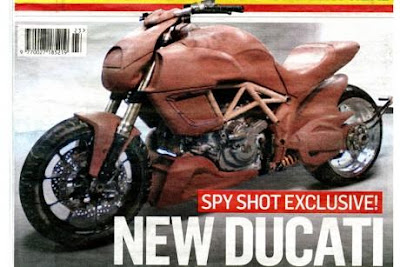 And here is the DUCATI Vyper which till now is just a scoop. News has been making the rounds since early March this year of a possible Ducati Cruiser touted as a V-Rod and V-Max killer and Ducati trading into the cruiser category which sources say Ducati boss Claudio Domenicali has revealed the company is looking to branch out into a wider market.
Motociclismo were the first to post the scoop pictures and then Motorevue revealed a clay model which matches the scoop pictures. Later the news appeared in Ducati News Today which does give the scoop more weightage. Ducati has neither confirmed nor denied the news. All in all it has been some time and probably Ducati being Ducati wants to give a cruiser which will be worthy of the brand name and not repeat the Ducati Indiana fiasco (of sorts).
Sources say the bike is already in running form and has started preliminary tests at the Bologna factory and the proposed displacement will be 1400cc which will make it the biggest Ducati. The engine is speculated to feature a stroked version of the company’s Testastretta engine in a V-configuration. The liquid-cooled engine is said to put out in the range of 170 hp. It will feature Ducati’s signature steel trellis frame and its tank and tail section will be angular and aggressive, similar to the styling on the Streetfighter. The Vyper has a meaty 240mm tyre on the rear mounted to an aluminum swingarm with dual exhausts running along the lower right side and by the looks of it this power cruiser looks like it's got a low slung seat and raked forks, a true cruiser styling. Could this be something similar to the DUCATI D66, the custom chopper from Luca Bar of Italy? Well, 2010 has a few surprises up its sleeve.