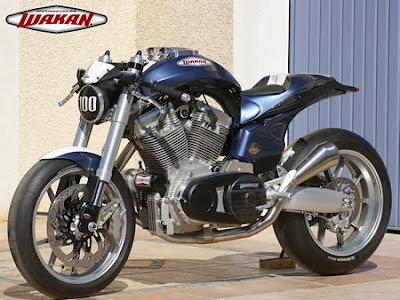 A new motorcycle company from France? It looks that way and their first bike is pretty sweet. Wakan Motorcycles has produced the Wakan 1640, a single seat, V-Twin powered sport bike built around the AC Cobra idea of dropping a big American powerplant into a sporty European frame.
Joel Domergue, the man behind Scorpa, a company known for some excellent trials motorcycles, and an expert trials rider himself, figured it was time to sell the company which left him with some cash in his pocket and ideas in his head. Actually, those ideas had been floating around for years but, busy with Scorpa, he didn’t have the time to do anything with them. Now, with free time and a bit of capital, he went to work. 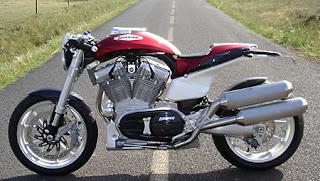 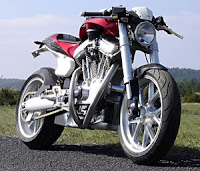 The Wakan 1640 starts with a single spine oil carrying frame, a 54 inch wheelbase, with inverted Ceriani forks mounted at 22 degrees. Power comes from a 100 cubic inch S&S V-Twin producing 115hp and 115 foot pounds of torque and those horses are moving a motorcycle that weighs only 390 pounds with oil, no fuel. The engine sports a single Keihin flatslide carb that gets ram air through a blower type scoop situated above the airbox cover. The fuel tank is below the seat, molded to double as a sort of rear mudguard with the filler mounted on the tailsection. The engine has been dynamically balanced to reduce vibration plus the bar end weights help and the result is a much smoother bike than you might expect. Braking chores go to a single 340mm front disc with a six piston caliper, which first road tester, Alan Cathcart, calls, “OK” but which might need to be tweaked a bit for serious stopping power. Cathcart also says the handling is similar to the Buell Firebolt XB12R but performance from the S&S V-Twin is definitely a step up.
The first 15 bikes are scheduled to be produced by October for €28,000 ($35,000),but as production ramps up the price is expected to fall quite a bit. The next 100 bikes for 2007 will retain the Keihin carb but afterwards, fuel injection will be necessary to meet Euro 3 emissions requirements in 2008. This is no prototype bike, it’s ready for production now and pre orders are already trickling in. They’ve kept the bike totally under wraps during the three year development time and these first stories show a complete bike. 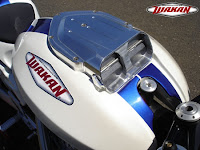 This is another move, now by a European, in the same big torque, sport bike direction we’ve been talking about for the past year. If you’re a bike builder starting out, you might want to forget the chopper direction and think sport bike. The Wakan 1640.
For more info and images, visit thier website http://www.engmore.com/home.html

You can leave a message at diesel@aol.in