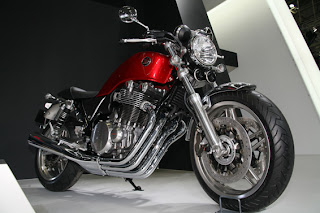 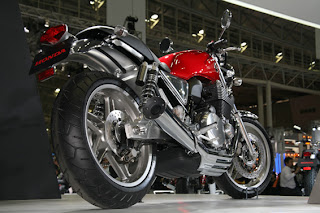 Happy days for Retro Lover bikers seems to be back again with Honda also joining the Now-going-retro bandwagon. And the best part is they have focussed on the legendary CB series for this concept. Although its not the CB750, but what not better could it be when you can expect even some more 'CC's added to the legendary 750? 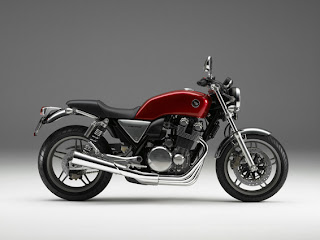 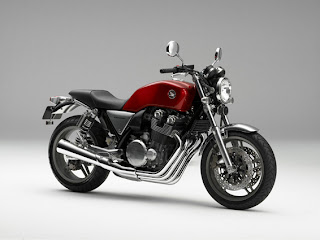 Honda announced the lineup of prototype, pre release and other exhibition models scheduled for display at the 40th Tokyo Motor Show to be held at Makuhari Messe in Chiba, Japan from Saturday, October 27 to Sunday, November 11, 2007.
Though unaccompanied by technical information, the photos reveal a retro-style sportbike (CB1100F), a retro-style racer (CB1100R), an over-the-top naked bike concept (EVO6), and a maxi-scooter (Forza Z) 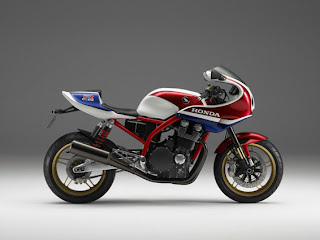 The Prototype CB 1100 R
The prototypes shown here are the CB1100F and CB1100R which look like they could be put into production without a whole lot of changes. Though concept bikes at shows like this are often little more than far out styling exercises, sometimes they are very close to what eventually appears and feedback from the show is taken before the final design is settled. No tech details yet. The CBs have a very nice retro standard design.
Also on display were the new versions of CB400 SuperFour HyperVtec and its bigger brother, the CB1300 SuperFour. 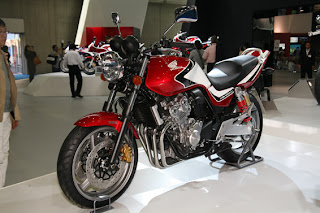 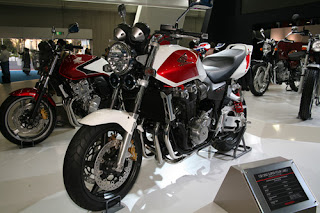 The CB400 SuperFour HyperVtec & the CB1300 SuperFour
The History of the CB F & R litre bikes.
In 1980, just two years after 1978, when Honda presented their flagship model CBX 1000, Honda made ita clear that the CB 1100 R is the "direct successor of the successful long-distance racing machines." And not without reason, because the CBX with her line six-cylinder was an impressive drive, but despite that the fragile suspension of the potential Sixpacks were not adequate. Moreover, the competition was not sleeping: Suzuki was roaring with the GSX-1100 while Kawasaki set ablaze with the GPZ 1100.
So Honda fused the six cylinders into four, well somewhat. The basis for the CB 1100 R is the CB 900 Bol d'Or, which also had similar suspension weaknesses. But the CB 1100 R had one basic chassis modification: The stand pipe diameter of the fork grew from 35 to 37 millimeters, frame and swingarm reinforcing measures were taken and acted in the front wheel brake system with larger discs. A sporty half-shell decorates the top model. The CB 1100 R Honda won the prestigious 'Motorcycle of The Year' twice at a row in 1980 and 1981.

80's Model of CB1000F & CB1000R
Shortly after its debut, the 1983 CB1100F earned a reputation as one of motorcycling's true superpowers — easily the most potent air-cooled inline-four Honda's ever built. This was Honda's first 1100cc superbike. Its arrival remains a benchmark for Honda in the evolution of the high-performance motorcycle. Building on lessons learned from more than two decades of racing, Honda engineers created the 108-hp heart of the CB1100F. And as good as the rest of the motorcycle was, that engine made it a masterpiece.
In Motorcyclist magazine's December 1982 road test, the 1100 turned an 11.38-second, 118.5-mph quarter mile. On the street, the magazine's testers discovered the bike's stunning low-end power. Throttle response was exemplary, thanks to the four constant-velocity carburetors equipped with an accelerator pump that kept throttle response very crisp. In the chassis department, a new box-section swingarm pivoted on needle bearings. Working in concert with the steel-tube frame and a 39mm, air-adjustable fork, it helped deliver amazing stability and cornering. Motorcyclist wrote "The CB1100F is the best superbike Motorcyclist has tested."