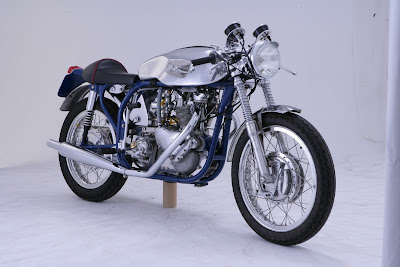 Of all the legendary hybrid bikes, Norwin, Tribsa and Triton probably are the best known merged bikes. Hybrid bikes, back in the 60s meant best of both worlds. A superior frame to suit the ride and do the corners complimented by an excellent power driven machine.
These are motorcycles of the highest order. These are not 'Look-at-me' or 'Touch-me-not' types, these are solely to be driven hard, very hard.
The TRITON as the name suggest is a hybrid of TRIumph & NorTON. The Norton frame is of course hallowed, doing its wonder in the NORVIN too and the Triumph is known for its engine's allround capabilities. The chasis is from the Norton Featherbed and the engine usually comes from the Triumph T110 or the twin carb T120. 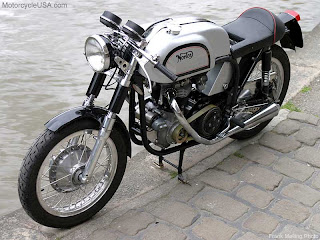 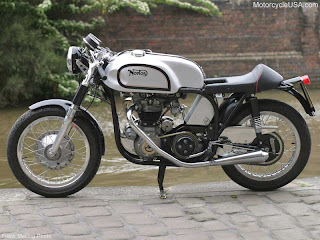 Lets get to the basics first, there are no two similar Tritons because all were customized. So even looks wise, there is bound to be differences between two tritons. The specifications mentioned are in general.
Looks wise, there is still no Cafe Racer which can beat the Triton. The 650cc & 750cc (usually these were the engines used) air cooled twin engine naked cafe racer weighs around 180kg and belts up roughly 45 bhp and above according to the engine capacity and tuning timings, which can reach speeds in excess of 170 kmph. Of course you will need to kick start to hear the engine warming up and of course the exhaust sound is legendary. The wheelbase of the featherbed is rather long, but it gels perfectly with the beautiful Triumph engine and the aluminum tank and those beautiful exhausts. Drum brakes does the duty on both the wheels, all in all, its an art!
The wheelbase helps in the incredible stability that the Featherbed offers, the legendary engine with leap forward no matter how low your rpm meter reads, its fast, itslethal, just the 'Perfect' way motorcycles are meant to be! But of course you will be recieving a fair ammount of vibrations anytime the needle shoots north of 120 kmph. But then, you do expect it and thats the *feel* of a Cafe Racer. Perfect! It will attract attention with the loud exhausts yelling 'here I am!'. This motorcycle is really made for an enthusiast. 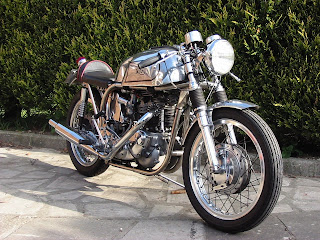 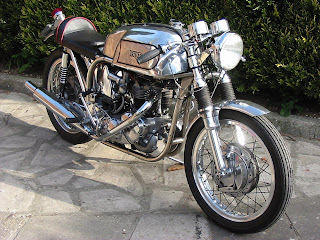 The Triumph twin-cylinder engines besides giving good performance and reliability, could be easily tuned for greater power by the addition of high-profile camshafts, high compression pistons, twin carburettors or fuel injectors which were amongst the more common power contributing modifications. There was also a Weslake 8 valve head available for the Triumph.
Among the three names of Norton, Triumph and BSA, the Triumph engine was the most dependable. For the Norton, over 7000 rpm the pistons were incapable of handling the heatand vivrations, the BSA 650 had a bronze bush main bearing on the right hand side, doubling as the crank oil feed, with a lack of effective crankshaft end play control, that all had difficulty staying together when thrashed, while the Triumph vertical twin used a ball on the timing side, and a roller on the other, with the oil feeding through a separate bronze bush in the outer right hand engine side cover. It gave the Triumph the edge over the other two. There was also the Quaife five speed. 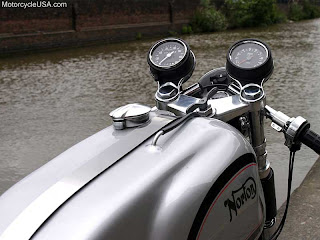 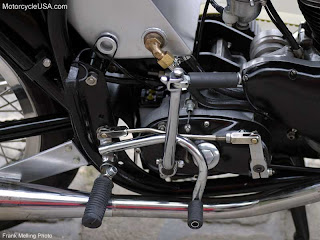 While many motorcycle dealers made equipment for Triton conversions like readymade kits, some would sell complete built up Tritons. The most important part required are the engine mounting plates and several different designs exist that can affect the engine placement and therefore the handling. The lower the engine is mounted the better the handling achieved from the Norton frame. Probably no two Tritons are the same. It was basically of course the same but with add ons, tunings and timings, the end result would be - a beast produced but with different configurations, because there was no official Triton, they were all customized according to the rider. Of course there has to be similarities, I mean, its a Cafe Racer, right? So clip ons had to come, a stripped engine had to come, rear-sets had to come, must be a single seat and stuff like that. More than a classic, it was acult motorcycle. Not a classic because as mentioned, there was no official Triton, but the combination proved so deadly, that everyone was rushing to have his own Triton. But along with fame, came the down bits too. People were so obsessed with the beauty, that some enthusiasts would just beautify their Tritons and it would be more for show than for go. People are still building their own Tritons from scrap. You can find a Featherbed from a dealer, the T120 is still widely available in the 'e-bay' kind of markets, so all you need is the desire. There are many clubs around the world who will help you build your Triton and you can start by asking the Triton Owners' Club where you can also learn from other owners' experience. Then there is Dave Degens Dresda and Unity Equipe, who also specializes in Tritons. FYI, British builder Dave Degens won the Barcelona 24-hour race in 1965 and 1970 on bikes he had constructed himself. The Bike Shed has a beautiful 1955 Triton featured. Some good reads can be found here and here. 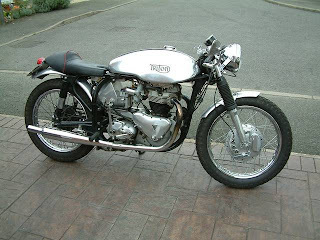 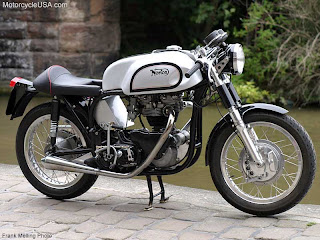 Although later, Tritons started becoming a 'Show Bike', the original idea behind the Triton was simple. A powerful Triumph engine into a Norton "Featherbed" frame and you had a fast, affordable and reliable bike, with looks to kill and die for. The 'general' triton would have the frame, gearbox, clutch, suspension and brakes fron the Norton. A set of specialized alloy engine plates enabled the Triumph engine to mate with the Norton frame. The tank would usually come from a Manx Norton and so would the seat. Hand made clip-on handlebars, chromed headlamp and rear-set footrests to complete the Cafe Racer motto along with those swept-back beautiful exhaust pipes which were by far from what they were also supposed to do -reducing noise, that is. The tank could be chromed or single coloured as featured in the bikes here. So the end result could vary from a basic to exotic. Some of the Tritons easily clocked a genuine 210 kmph. To take home the main points, although the Tritons differed from each other, the original concept of tritons were machines which were genuine, fast, relaible racer having the best frame and engine the market had to offer during the period. What more can a bike demand to become a 'Cult Classic'? 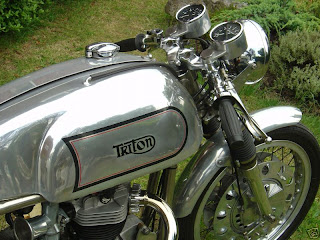 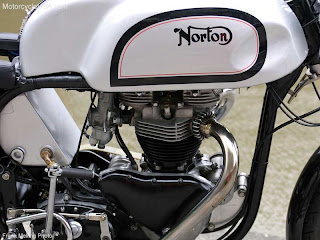