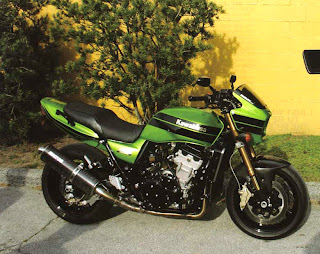 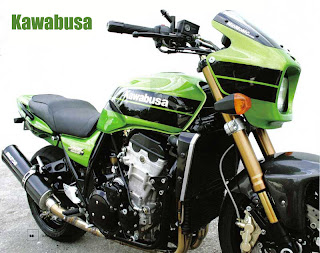 That's a ZRX 1200R, right? But then, there seems to be some empty space behind the cylinder block, umm... ok, maybe something is missing, no, wait, how come the ZRX has a monoshock? And by the way, these are inverted forks, but I KNOW a ZRX doesn't have them. Wait a minute, whats that wriiten on the tank... KAWABUSA! Okay, so thats a Busa engine in the green K. So it's a hybrid bike. Maybe people do it somewhere in this world, but by and large hybrid bikes like yesteryears Triton or Norvin has faded out. Well, not completely. I made a recent post on such bikes, but those are one-off bikes. What you see here is a bike which can be yours! That is Norm Wilding is planning to make a series of similar bikes which will be for sale. Norm Wilding of England owns and operates Mid MO MC (Mid Missouri Motorcycle custom). His fascination for 'Hot Rods' led him to test his wrenching skills in his earlier days on Triumph, Norton, BSA, Matchless, AJS etc. He is one of Europe's best custom builder and has been featured in many custom magazines, more so in Europe. Working for over 35 years now, most of his present custom bikes involves ferrociously fast Jap machines and HD Trikes. In 1979 Norm built a Harley Davidson 45 trike that took Best Engineering, Best Trike, and Best of Show at "The Kent Bike Show". In his 35 years of being "in the business", Norm has built many "show quality". 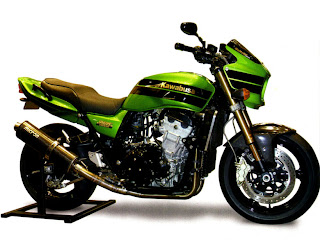 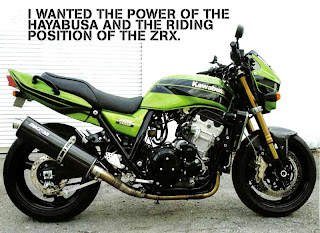 Anyway, Norm always felt that the awesome power of the Busa is somewhat let down by the riding position. Not that there is any fault in the Busa, but its a sports bike, so obvious you have to scoop and bend and Norm was not willing to do that at 54. He felt that the ZRX had a very comfortable position, after all its a road bike. So what you now have is a bloody maniac road bike! With the very improved handling of the Busa thanks to the forks and the monoshock, swingarm, wheels, brakes and of course the motor, the KAWABUSA is actually more a Busa with a road riding position. Or in the other way, the ZRX has now got a fuel-injected 6 speed transmission! The frame was modified to accomodate the Busa engine. Visit this link here to see and know the Kawabusa that Norm built. 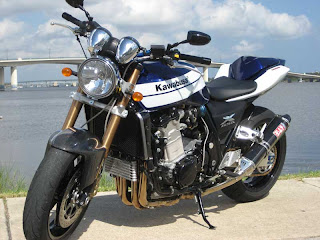 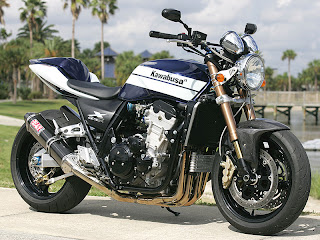 For the next model in the same vein, Norm made this even stunning Kawabusa II. Norm seems to have gained considerable experience in his first Kawabusa, because as good as the initial project was, the second seems even more refined and delicious. The stunning round headlamp, the twin pods, the colour scheme, the raised pillion seat, all gives it a more 'today' look then the 80s green meanie. This was his "Special". Learn more about this stunning beauty here in the official website. 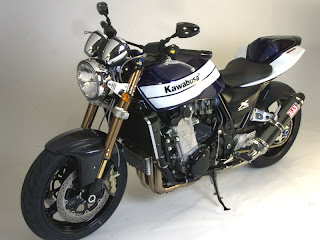 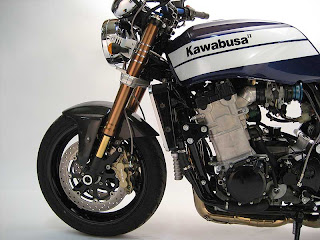 In Norm's own words, "For this 'special' I started with a super clean 2003 ZRX1200R with only 4,300 miles on it, and fitted the complete engine, wheels, brakes, inverted forks, mono shock and swingarm, wiring harness, and ECU off a 2005 Hayabusa GSX1300R with only 2,500 miles. On the original Kawabusa, the injectors came very close to the underside of the tank, so I had to cut a section out for an airbox, which lost tank volume. So on this one I built a set of intake manifolds, and turned the injectors down into a more conventional carb position, which also enabled the fitting of a set of bell mouths ( velocity stacks ). Carbon front fender is Coerse ( only available in Japan ), and rear carbon hugger is from Pyramid ( England ) . The gauges/instruments were from an 02 European GSX1400 ( similar to Bandit, but with the addition of a fuel injection light ), and the headlight unit is from an 04 Suzuki Bandit. Handlebars are Renthal "low bars", and all brake lines are BF Goodrich braided stainless. Oil cooler is from an 05 GSXR1000, as is the complete tail section ( removed from a brand new bike to replace with a racing unit ). Tires are Dunlop Qualifiers ( 200 on the rear ). The header is hand fabricated polished stainless, and the cans are Yoshimura carbon, originally designed for a ZX14 ( ZZR1400 ). Bike is fitted with a Power Commander USB. I built this bike because I love the power of the Hayabusa, and the upright riding position of the ZRX, and it sure is a blast to ride !!!!!!!"
It is a combination of more than 2 bikes, alright, but the soul is the same. It's a KAWABUSA! 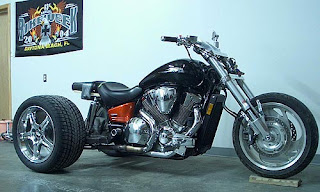 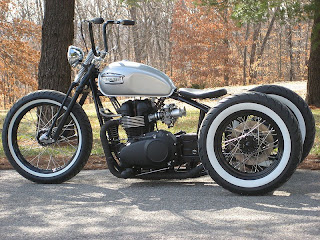 And if you thought, Norm only has passion for ZRX and Busas, then think again. As I mentioned he makes a lot of trikes. And that's not all, you can get your customized paint done in his job. Click on the link here to see a range of brilliantly done Trikes. Featured here are only 2 of his products, a Honda VTX and a Triumph Bonne. But it's just not just that he specializes in Kawabusa hybrids, he works on a lot of other stuff. He has a Z-Rex (a stunning ZRX) , a ZX-6R, a lowered and modified Busa among others up his sleeve. You can see some of his products here. 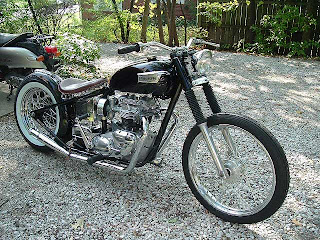 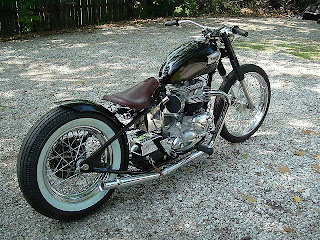 Also here is my mouth watering addiction. A Triumph, customized. Bee-u-tee-ful! And then the awesome paint job. I mean, just look at it! Anyone, who is not even a biker, would love to kill to posess this stunningly done Triumph Hot Rod, wont you? I will... Visit the link here to see Norm's awesome paint jobs done on a lot of customers personal bikes. Of couse, visit the website to see lots and lots of pictures of brilliantly beautiful and stunning motorcycles and trikes.