Eat This! The V-Rod Muscle 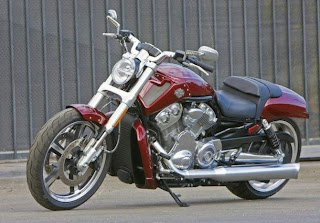 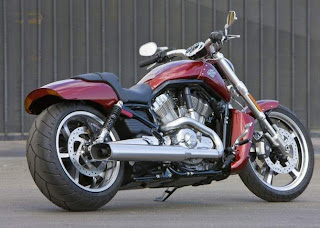 Harley Davidson has released its 2009 portfolio of bikes with the focus on CVO (Custom Vehicle Opeartions) and a new V-Rod. If you find a slight difference in the appearance of the V-Rod, than you do have an eye for the HD category. Well, this is the V-Rod Muscle, the all-not-so-new VRSCA (actually this is the F series, so its VRSCF) from the HD stable for 2009. Yes, as you must have noticed, the bodywork is more angular than curvy from the V-Rod series and of course, there is an exhaust for each side. Well, why a bigger bike?
Although the VRSC has set the cash box ringing for HD, and critics have lapped the revolutionary engine as an excellent piece of machinary and not to mention, HD charting a total new category (Power Sports Cruiser), the V-Rod has not progressed in sales as predicted during the initial hulaboo of its launch. True, its a top spinner, but the Sporster and other range is also selling just as well. So why make an extra effort for the V-Rod? Because its (kind of ) HD's flagship bike, so much time and money and resource has gone into it that HD has to see it as a defining chapter in their history which has (as yet) not happened. For the record, the V-Rod is one of the best bikes money can buy in this world currently. 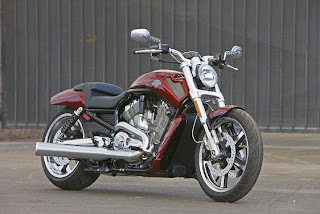 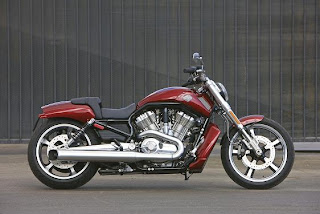 This time again, HD has made a stunner! The gaping air scoops, sweeping side-pipe exhaust and a huge rear tire speaks of a contemporary urban sense of style. The 1250cc 60 degree Revolution V-Twin engine is Liquid cooled and has a Electronic Sequential Port Fuel Injection (ESPFI) along with dual overhead cams four-valve heads and a five-speed transmission. The engine is rubber-mounted in a hydroformed steel perimeter frame. A shell covers the large-volume airbox located over the engine. A five-gallon fuel tank is located below the seat on all VRSC models. So, what exactly is *new* in the Muscle that regular V-Rods were not having? Well the Torque has been increased from 113 Nm@ 7000rpm to 117 Nm @6500 rpm with an increased power output of 125 @ 8250 rpm in place of 115 @ 8250 rpm in the earlier model. 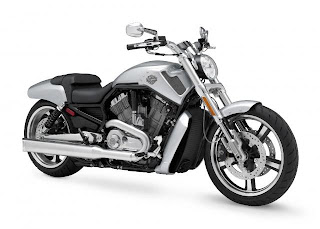 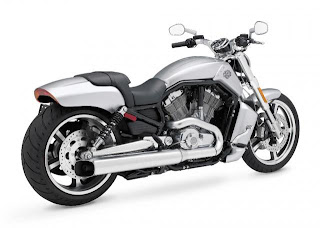 The traditional optional virtually invisible ABS with high performance Brembo triple-disc brakes are of course present.
Looking at it, the first difference you notice is the chopped tail section, which looks solid and maintains the clean and powerful image of the V-Rod. Then you notice the New V-Rod wheel area. The size of the massive 240 mm rear tire is accentuated by the new broad, clipped and clean rear fender. You also find the new 5 alumunium spokes edged by matt finished lines. On the rear end the combined stop/tail/turn LED light is tucked under the edge of the rear fender with side-mount license plates. At the front side, you notice the wider and more angular air-box with inlets covered with woven wire mesh. It compliments the suaveness of the rear styling with a trimmed fender and satin-finished inverted forks. The LED turn signals are integrated into the mirror stems. The radiator shrouds seems to be restyled. 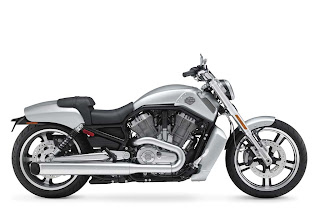 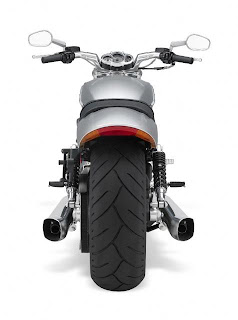 Of course you cant miss the all-new seat design. Its more deeper to hold the rider firmly with a real back support.
What you might miss out is that the new handlebar has internal wiring. The handlebar is 1.5-inch cast aluminum with tubular steel ends and integrated risers. The distinctive V-Rod teardrop reflector optic headlamp housed in a satin black bucket is a sight to behold.
The rear end is well complimented by the exhausts in satin chrome with fat, turn-out mufflers. Other *New* things include clutch cover with relocated dipstick, new triple clamps, new stylized rear shocks with black springs, new instrument graphics and housing.The V-Rod Muscle is available in Vivid Black, Brilliant Silver, Dark Blue Denim and Red Hot Sunglo. Just to mention that the VRSC models were priced in the $15,000 to 18,000 range, just below the touring categories. The new series will be priced higher in the $18,000 to 21,000 range. 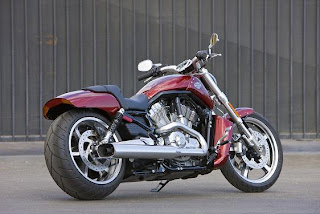 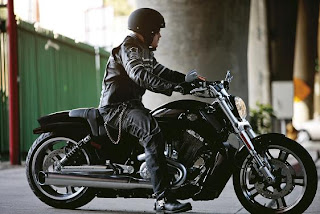