The Monster of Rolls V8 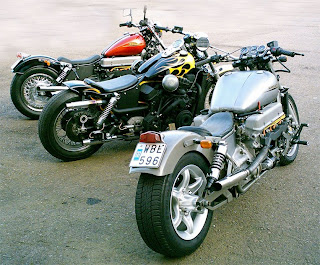 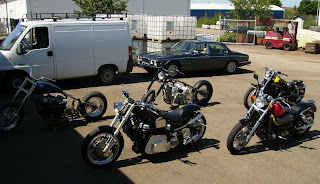 Well, get a load of the Swedish version of Boss Hoss. No, not literally, but practically! Swedish custom motorcycle firm, Rolls V8, believes on the same vision of their non-related overseas brother of chunking car engines into motorcycles. But not just any car engine, it has to be a V8. Okay, now that's clear, lets move on. What is really impressive is the overall look these bikes have, it doesn't look large or huge and yet the mosnter is inside and the overall look is so fine, just like a normal cruiser-road mixture street bike. 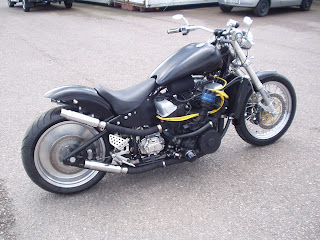 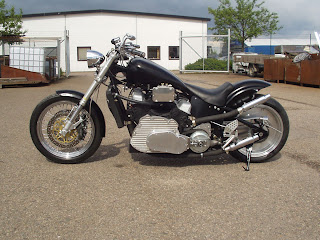 Chief creator Rolf Andersson used a Rover V8 engine in one of his creations and several other such custom built bikes are also ready for you. Although these bikes looks much smaller than the Boss Hoss bikes, something like the DRYSDALE, in power transmission, they are at par. Rolf has a preferance for GM / Rover engine for the reason that is has variable size, weight and comes in many engine sizes ranging from 3500-5200cc. He uses a lot of aluminum as he says its easily weldable. You can get both longitudinal and transverse engine set-ups.
The bikes are all single speed and use an electric/hydraulic clutch setup. He also offers a primary drive for Rover V8s in the transverse configuration. 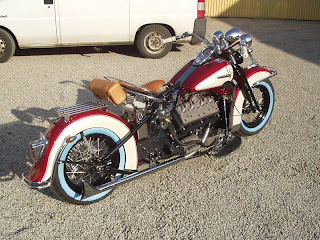 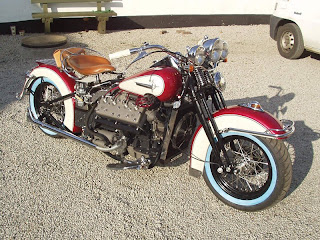 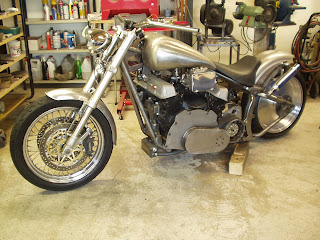 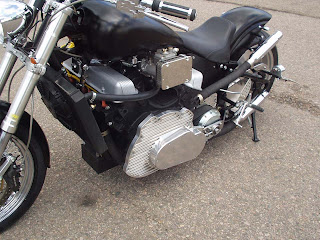 The SIDEWINGER V8 Kit & The ROVER V8 with Primary Drive
Then there is the SIDEWINDER, which is based on a Harley Softail frame. It actually is a kit mainly targetted at the busy blokes who dont have the time to customize the entire bike. In a Sidewinder basic kit includes virtually all the special parts in order to minimize the production of parts for you. Parts included: Ram, swingarm, engine mount, V8 Primary, 5 speed gearbox, clutch, 3.35 belt, internal support plate (switching gear), external assistance stock bridge (link), oil, base plate (engine), 2 intake, 4 exhaust manifolds, breast cover , adapter for charging Harley, support layer to the rear, radiator, water pump, termostathuslock, expansion vessel and various hoses, branches, hose clamps. (Aluminum intake, chest cover and oil pan, exchanges). The Sidewinder basic kit will cost you $11,800. The reason for selecting a Harley, according to Rolf is that there is an unlimited amount of shares to buy the Harley, so it's only your imagination that sets limits on how to build a bike. 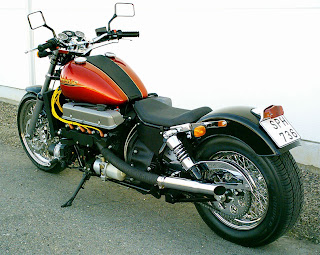 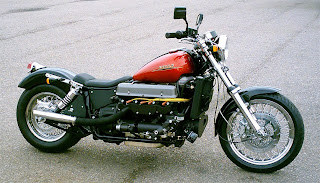 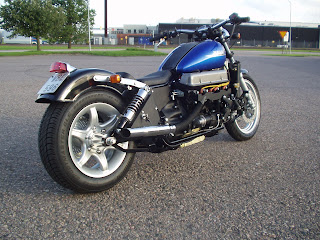 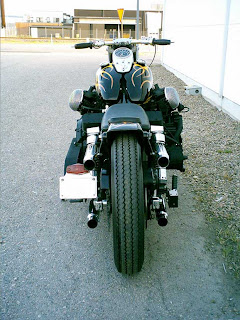 The FLAME
The FLAME uses a 3500 cc aluminum v8 engine with a 4 speed H-D transmission. Top figures are peaking at 210 hp with a massive 300Nm of torque. With that much of muscle under the skin, it is easily capable of reaching 300 km/h. 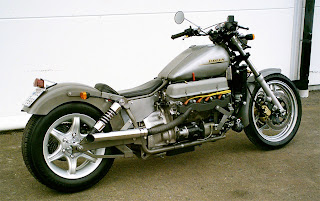 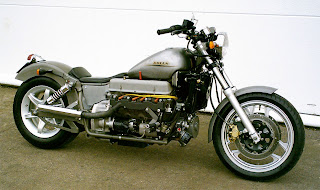 The PROTOTYPE project started in March 2001 with the goal to construct and build a motorcycle in the size of a regular motorcycle but with a v8 car engine. The frame is a split frame made from 2391C quality tubing and it is shaped in a cnc Herber bender with internal clamp and the front end came from a Suzuki GSX 1100 F. Everything is TIG welded for high quality. In this particular model, the clutch was the biggest challenge and afetra lot of experimenting, he settled for a electric-hydraulic system which has a one speed transmission. Amazingly this mammoth cruises at 110 kph @3200 rpm and has a top speed of 200 kph @5700 rpm. This moster do gulp a lot as expected and it gives you 10 km for a liter, not really bad then! With a 15 liter tank, you can only go for 150km, so think well before you take the expedition. He has already tested this prototype for 21000 km, all trouble free during the past 2 seasons. It's construction time was 3 years.

You can visit the awesome guy virtually at the ROLLS website and browse through a lot of pictures in the Mix gallery. FYI, Rolls V8 is also into Harley Davidson servicing and customing. 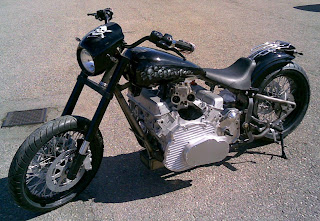 The BLACK PEARL, obviously influenced by the swahbuckling Jack Sparrow and his 'Pirates Of The Carribean'