I would really request you to watch the video first and then go ahead with the post. One done, I assure you the next thing you will want is to get your hands on this model and just take a spin. Of course, you have to be a classic bike lover. So, if you have not yet seen the video, do take a look at it. That so typical design of a raw air-cooled twin in-line engine, those handlebars with twin mirrors and twin pods, those flowing exhausts, the flat seat flowing with the boxy beautiful tank... uhh! it all makes perfect sense.
This is an epitome of what we call a 'Street Bike' Street bike it is... with a performance to show and the exhaust note you just cant ignore. In fact, it had a kind of a superbike status when it was launched. Kawasaki was always known for giving untamable beasts like the Z or H series. This bike was different than the prevailing bikes of that age say the CB750. This was leaner and definitely meaner. 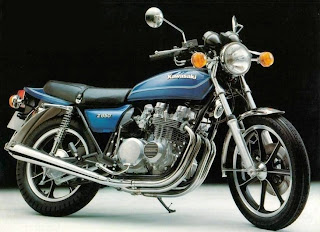 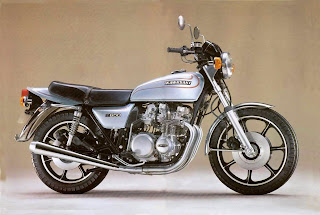 Also known as Z650 in the U.S, it had razor-sharp handling, bitesize dimensions and with its weight lesser than its contemporaries assisted with high-tech suspension and a supremely flexible engine made it a new superbike that assaults high speeds with intelligence and finesse rather than bulk and brute strength. Funny enough, Kawasaki advertized it as the fastest 750 although it was a 650, so confident they were in their product. But Yamaha riding on the XS750, Honda on their CB750 and Suzuki on their GS750 had put some serious underlinings and so Kawasaki thought it would be better as to showcase what real potential the model had than to combat in a cubic capacity battle.
Kawasaki focussed on delivering high performance but with lesser horsepower, which also meant meeting emission norms, environment friendly and all. 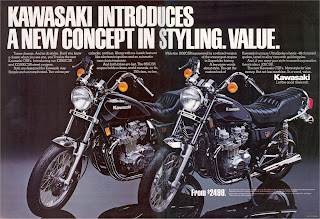 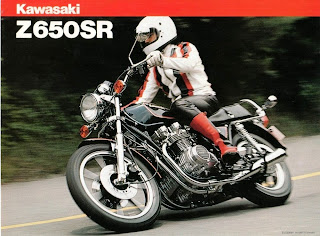 The then acting head of this model for Kawasakiwas Mr. Takayuki Tsuboi who also perceived a new breed of biking enthusiast who preferred comfort, light weight and easy handling. Street biking was the in thing then and Kawasaki hit gold with this model. Well, yes, if you look at the specifications, maybe you wont be impressed, but take a ride and you will be... impressed!
The KZ650 engine is smooth thanks to the Hy-vo cam chain that adds to the smooth rotation of the plain-bearing crankshaft, has ample mid range power for city driving and more is that it revs so easily producing a broad band of power that the gearshift (a definite bane for city driving)almost becomes redundant. 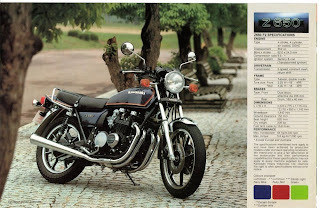 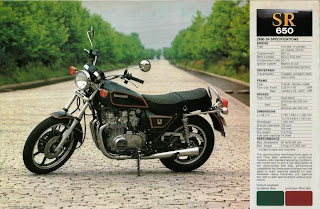 Lack of horsepower may not give a whacking top speed for the model to match the other competitors but check the roll-on acceleration at even 100 kmph (what did I say? perfect city bike!) and the Kawasaki leaves its competition in the rear view mirror. But hey! less horsepower does mean good mileage right. It would satisfy you from a full throttle of 17kmph to a healthy 22 kmph with sane driving. One very interesting thing we probably haven't thought about is although 4 valves gives a better horsepower ratio than a 2 valve but the four-valve layout requires high rpm for peak efficiency, which in turn produces lots of noise and lots of power-robbing heat and least we forget life of the engine. This point was highlighted by Mr. Akira who was designing the model and he also thinks that consistent and usable horsepower at lower rpm makes more sense on the street. 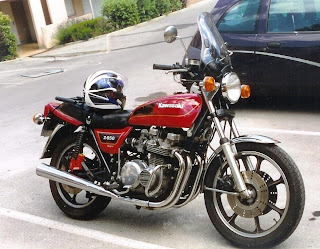 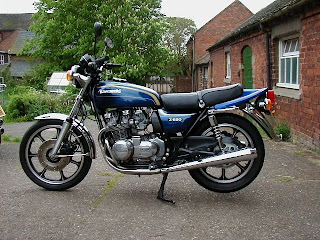 You must be very well aware of the catch line from Kawasaki 'Let The Good Times Roll' and the KZ650 is exactly that once you stride atop it. Carving through high-speed bends with rock-steady stability to slow corners, it effortlessly glides you responding in the crisp fashion of race-bred machinery helped with good steering geometry gives an overall light feel so that you dont have to muscle this motorcycle. If its outright horsepower for you, than this bike is definitely not for you, but if you like to ride, a good ride with every format more than enough, then you should definitely try the KZ650. In short, it will give you a very 'enjoyable' ride. If you have watched the video, you will know what I mean. 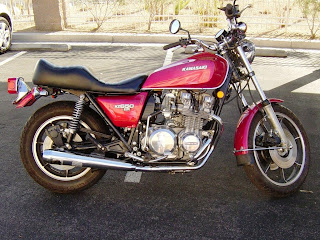 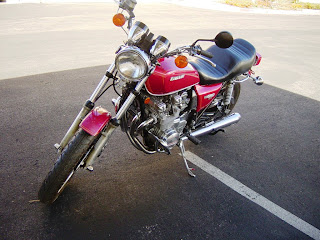 A short history of the KZ650 - The first model out was the B1 produced from 1976 with claimed 64 HP from the 652cc motor aided with a single 245mm disk was used up front with a 250mm drum on the rear and came out in three colors, candy super red, candy emerald green and candy emerald blue. Next out KZ650B2 which came in 1978 with new colours luminous dark blue and luminous burnt red. The KZ650B3 came in 1979 with the most significant difference over the B2 model was a change of graphics and a return to the original green and red colors with rubber mounted front footrests to combat vibration and a hazard switch was added to the left-hand switchgear. Then came the C1 & C2 in 1977-78 also known as the CUSTOM with the colors of Metallic Regal Blue and Moon Dust Silver. Kawasaki fitted seven spoke alloy wheels with twin disks up front and a disk at the rear. 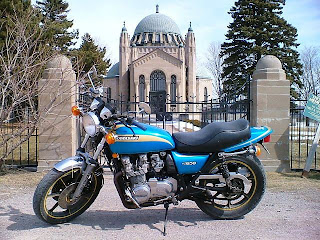 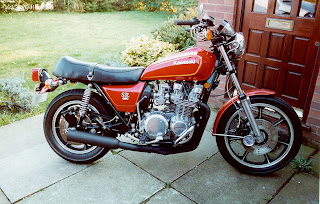 The bold new graphics made this model stand out from the crowd. C3 & C4 came in 1979-80 with the C3 being the first Kawasaki model to use the new all weather sintered disk pads and braking in the wet was much improved. The side panel badges were also slightly changed. The D series, D1& D2 known as the SR (STATESIDE REPLICA) 1978-79 was what Kawasaki thought a replica should be. Basically a C2 with slightly 'chopper' styling and chrome plating on the headlamp shell, clock lowers and chain guard. The rear tailpiece was dropped in place of a painted rear fender. The front exhaust down pipes were crossed over and the mufflers were made a bit shorter. While the D1 came in Candy Persimmon Red, the D2 came in two colors; Midnight Blue and Candy Persimmon Red. The rear wheel was now a small fat 16-inch item for the custom look. There was also a LTD (Limited) version which was similar to the SR. D3 & D4 came in 1980-81 and the D4 had electronic ignition. There was also a E series while the last of the tribe, the F series came out almost at the same time. The F1 was a cross between a C and a B model. It had the alloy wheels but kept the drum brake at the rear instead of a disk. It was offered in three colors, blue, red or green. The F2 was much modified over the F1 model. It incorporated many of the larger Z750E parts. The motor was now finished in black and used CDI ignition instead of points. The front end from the 750E was grafted on meaning a change to the brakes, front wheel and clocks. It was offered in three colors, red, green or blue. The kick-starter pedal and shaft was removed from the engine and a passenger grab rail was also fitted. For the F3 model that came out in 1983 CV carbs were fitted with air box assembly from the Z750E/L models. The F3 was offered in two colors, ebony or passion red. The front fender was now also painted to match the rest of the bodywork. 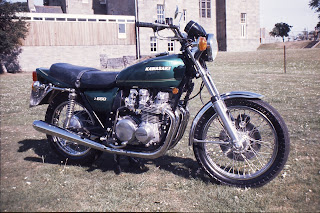 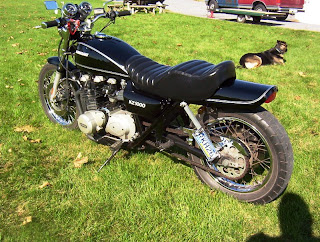 The last model was the F4 which came out in two colors, galaxy silver or candy wine red. There was also a H series, especially for the U.S market, H1-H3 sold as the KZ650CSR with 19 and 16 inch wire-spoke wheels.
All details on this post or at least all of the history came from a website named Jarlef. What a amazing fan tribute to the KZ650 series, all the models are pictured there. It has details on each and every series and even at all the models of that particular series from the B series, C series, F series to the SR, LTD & CSR models. It has also lots of links and you can also post your bike photos and info there. Amazing fan! 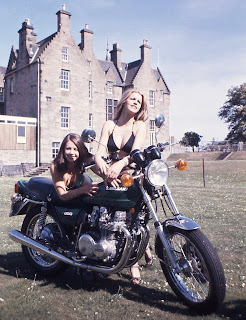