So rare, that only 67 ever got made. And this is the reason that these bikes are one of the most sought after collector’s item.
I am sure you must have heard about a certain single cylinder Ducati back in the early nineties. Back in that time, we were teens and internet was still alien to me but I vaguely remember reading it in a magazine or probably it could have been a newspaper about that certain single cylinder Ducati. It was not that I was a passionate Ducati fan back then but the beauty of the bike remained a lasting memory. Now I know, I can remember the original Supermono which Ducati released in 1993. At the first look, if you see a strong resemblance with another Ducati legend, let me refresh your memory that you will see the 916 in the mono and that’s because the 916 was inspired from this bike. Of course both these bikes as well as some more Ducati siblings were designed by none other than Pierre Terblanche. 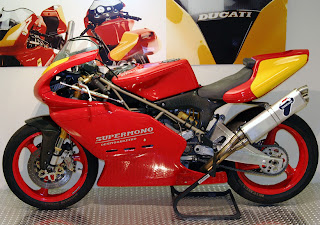 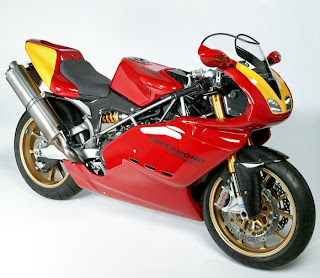 The Supermono was the ultimate lightweight compact racer built with many technical innovations. This high-tech racer which was fitted with a 549cc, four-stroke, liquid-cooled, fuel-injected single-cylinder engine. Being a racer bike and that too a Ducati, it obviously had high spec suspension components and combined with a dry weight of only 118 kgs, the Supermono was an excellent handler. And think about this, the 550cc engine was belting out 75 bhp which was enough to push the machine to a top speed of 225 kmph. The Supermono engine size was later increased to 572cc in 6 for only 2 models which saw an increase in power to 80bhp. On the tracks, when competing against highly modified 4 cylinder bikes, it would beat multi-cylindered 600 cc machines for win after win. Of course, all these features and technology came with a price. It would have cost you US$30,000 way back then in 1993 so you can very well judge how much it is worth now. But then these were not street legal bikes as they were race-bred. Maybe you can’t have those 67 or even if you can catch hold of one, you won’t be able to drive it on road but there is good news. 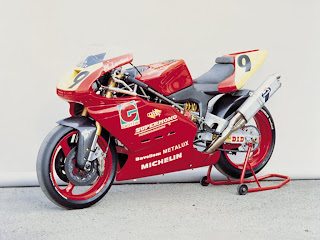 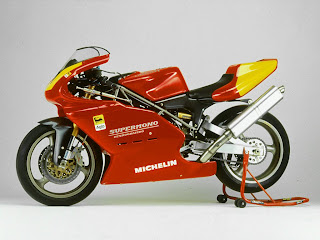 A certain gentleman, Alistair Wager of Britain had worked with Ducati for many years and also headed the HMC Ducati AMA Superbike team in 2001. Now what he has done is built a whole new Supermono which is street legal. Yes, with some help from Ducati, Mr. Wager has built a brand-new Supermono Strada and the thing is the Strada has a bigger and more powerful engine than the original and to boost things further, the chassis and suspension are also updated. Well building a bike of such stature would never have been easy and especially when it is not a production bike. It took 6 years for Mr. Wager to complete this project with a total expenditure of £50,000 ($76,000+) which included work on many patterns and moulds. What you see here is the 2009 Supermono Strada with an increase in overall cubic capacity to 595cc. The head is borrowed from the 999R and it develops 88bhp. While the original had forged steel con rods, the new one has Pankl forged. Inlet and exhaust valves are of course increased from 37mm and 31 mm to 41mm and 33mm. Other makeovers from the original include timing gear driven water pump assembly and wet alternator in place of exhaust camshaft driven water pump and dry alternator, increase in the air-box volume with a high flow air filter for increased performance. There is the cooling system now fitted with a water expansion tank which was not fitted in the original mono. 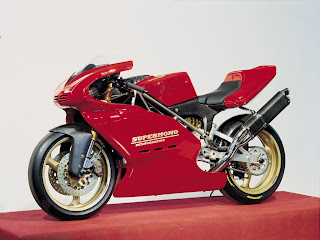 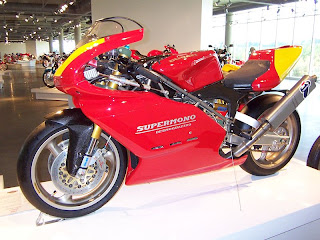 New exciting components include a new Magneti Marelli fuel-injection system, standard 6 speed (one-up-fice-down) shift pattern gear box in place of the close ratio gearbox on the race bike. The front brakes comprise twin 305mm discs replacing the earlier size of 280mm on the original bike with four-piston radial-mount Brembo callipers, as fitted to the 1098R. The bike rides on 17-inch Marchesini forged Magnesium ten-spoke wheels, shod with 120/60 (front) and 180/55 (rear) Pirelli Diablo Corsa tyres. Of course a Ducati can never be a Ducati without the trellis frame and Mr. Wager paid tribute to the original by making a replica of the original but is lighter now due to the chrome-molybdenum tubing. The swingarm is similar to the 1000SS. Top and bottom yokes are modified items as fitted to the 999R and of course suspension components are Ohlins. 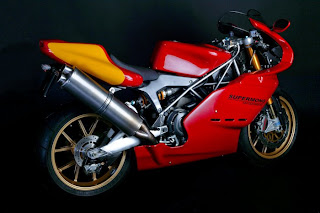 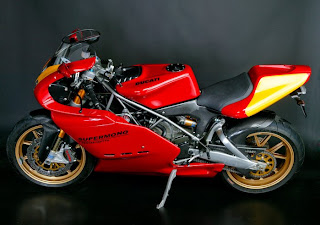 Other features carried over from Ducati siblings mainly the 999R include ducted air cooling to the carbon cambelt cover, integral fuel pump and pressure release valve assembly mounted to the underside of the fuel tank, electric radiator fans as well as the speedometer instrument and rear wheel pick-up sensor. And yes, it has headlamps and all. It has projector styled twin headlamps, LED tail lamp, push-button electric start, and number plate illuminator lamp also with left/right rear indicators, mounted on a lightweight carbon number plate bracket. Left hand handlebar switchgear with self-cancelling directional indicator switch, horn and high beam pass button. Right hand handlebar switchgear with engine kill switch, starter motor button and main lighting switch as you would find in any street bike. Also like the 749 / 999 series, it has the retractable Aluminium side stand with ignition cut-out switch. In fact the entire dash instrument is from the 749/999 series. And lots of additional components which were not there in the original. 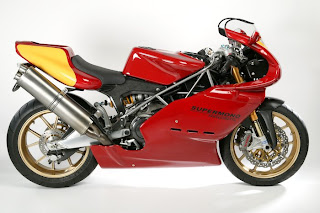 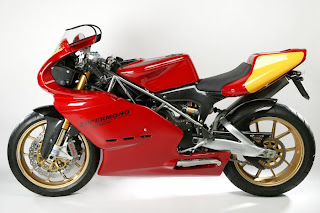 The Supermono, built with power to weight in mind, itself in a way was a derivative of the 888 Racing. The liquid cooled double overhead cam shaft four valve desmodromic cylinder head, the horizontally placed 550cc cylinder utilized a "dummy connecting rod" that acted like a second piston were all features of the 888. By the way, the racer originally had the exhaust exiting on the left. So, if Mr. Wager is out there to sell this highly desirable bike to us, why didn’t Ducati take it on them to make it a production bike? After all, there has been a demand for the same since the early 90s. Mr. Wagner says that the factory cannot risk putting such a lower spec bike into production, with no guarantee of success. Well, if the curiosity of bikers towards the Supermono Strada is any indication, Ducati might just go back to their drawing board and plan it up for mass production. The Supermono was even designed as a race bike that could be converted to a street legal bike without much hassle. But nothing came out of it. Anyway the new bike has gained a few kilos with the new clothes and has tips the scale at 133 kg. 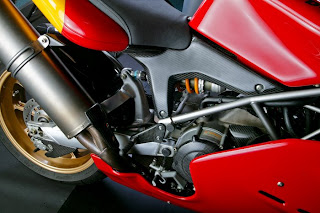 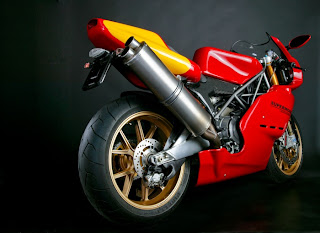 Yes, although Mr. Wager had spent a lot on the first bike, expected cost for customer models are around 35,000 UK pounds (about $52,000). But the original Supermono is now selling in excess of $80,000, so see, you are after all getting a good bargain, a race replica bike with updated components and more features and you still can save enough money! The most fascinating thing about the original Mono is the sound. Yes, we know the sound of a big single is something really different and very infectious, but listen to the Mono in the video and you will say that it is ‘really different. And at high revs, it hardly sounds like a single. As per as riding comments go, the select few people who have ridden these have all complimented the race qualities of the Supermono Strada. Unlike other big bore singles, the Supermono starts to breathe only after 6500 rpm and reveals its true identity over 7000 rpm. The Ducati goes from less than 20 horsepower to almost 40 between 5700 and 6500 rpm, burbles through a 500-rpm plateau, and enters its real powerband at 7000 rpm. Near to the 5 figure rpm, the Weber fuel-injection provides immediate, crisp response to your right hand. 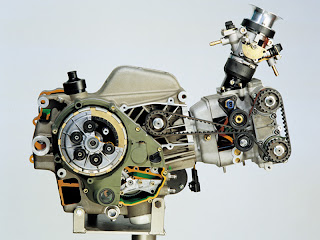 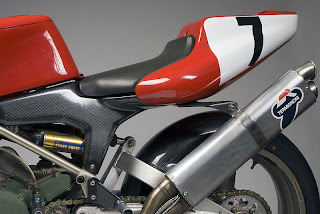 And the most surprising thing is the lack of vibrations which are common in a thumper, riders say its like riding a V-Twin! How is this? Well, that was the innovation of the 888 inspired "dummy connecting rod" that acted like a second piston. As for outright performance, it it IS fast: 11.44 seconds at 195 kmph through the quarter-mile will match the best of the four-cylinder 600 range and top speed is an impressive 225 kmph. And it’s a SINGLE! Mind it! But where did the Supermono use to race? After all it was built for racing right? In the 90s, a European Supermono Cup existed (Sound of Singles) which was a side event to the World Superbike Championship. The Supermono was a "test bed" for the World Superbike racers. And so now you know Ducati named the bike after the event which means it was specifically made for the Supermono Cup. Other tit-bits - New Zealander Robert Holden was the most successful of all Ducati Supermono racers. In 1994, Holden came in second in the Isle of Man TT and then in 1995, won the Isle of Man TT. 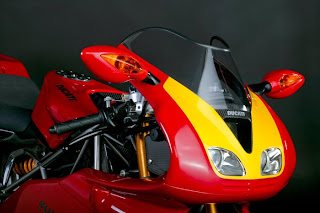 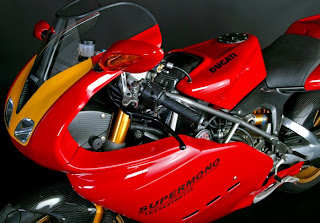 The new model with 595cc will weigh 134 kilos only. Of course at the offered price, it doesn’t seem to take on the mass market, definitely not when you think it’s a single cylinder engine but I am sure it will find its own fans and not only Ducati fans, because there is a certain section of bikers who yearn for a decent thumper and who will not want a thumper that is a Ducati and that too, a limited edition? If you have the money, that is! 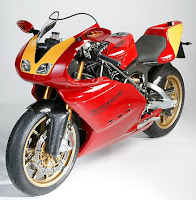