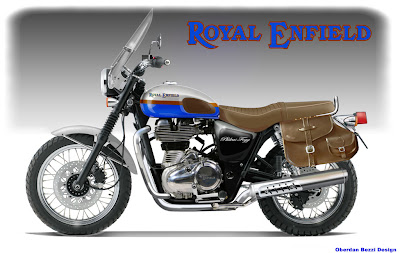 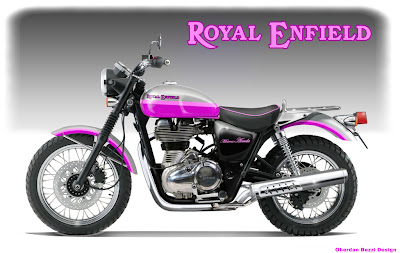 Oberdan Bezzi, better known as OBIBOI to the motorcycling world has this time put his creative genius on the Royal Enfield. This passionate and professional motorcycle designer is one of the most creative artists of recent times. His blog Motosketches is a huge hit and is featured on every motorcycle featuring website. He does have another blog though, Scooter Design and ihe specializes in scooters in the blog
This is the 'Phileas Fogg' & 'Mistress Aoudi' and these two sketches are dedicated to romantic and dreamy bikers. No gender bias here as he mentions that Phileas Fogg is for men who likes to travel while Mistress Aoudi is one for the ladies. The work of art is inspired by Jules Verne's novel 'Around the World in 80 days' where the charecters are on long trips to India on rough roads and probably that's why he choose Royal Enfield as the bike's mother plant is in Chennai (formerly Madras). I for one, wouldn't surely like to get these beauties on the road to get them dusted, feeld like so much as a home decoration show piece! 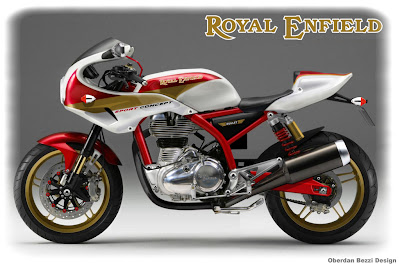 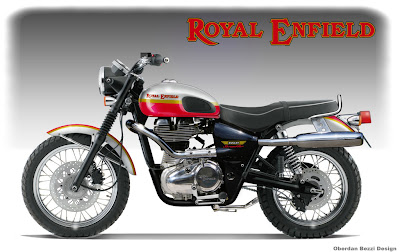 The third model is the Bullet Sports Concept. Although the current bullet models and 'sports' just doesn't tag along, but hey, there is a possiblity that REML just might pick up the idea. Based on the 500 (for the uninitiated, there is also a 350cc model from Royal Enfield), the design has been created to gauge the European public and although he says people wouldn't buy the Bullet for its performance, but surely there are many a takers of the classic memories.
The last concept is of a Bullet Scrambler. And he says that he is absolutely convinced that it would be attractive to many. Yes, you can definitely count me in. Bullet scramblers were quite famous in the 60s and even now, you will come across some customized Bullet scramblers. He says that its not for the outright performance factor, but 'to enjoy the scenic roads in total relaxation'. Yes, certain things must be upgraded in the Bullet as Obiboi mentions like the frame itself, more robust wheels, better brakes and a more 'Scrambler' design and just add 'a comfortable seat, a top exhaust and ... you're done!'
Source: Motosketches