Bang up for a BROUGH Banquer SUPERIOR 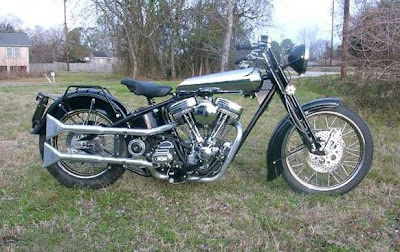 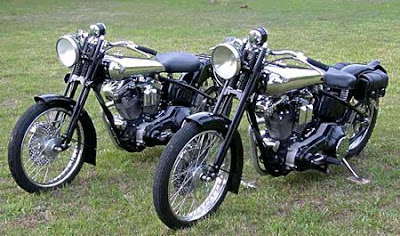 There would be only a handful of guys in this world who can buy a Brough Superior, I mean it does cost the moon. Out of this handful of guys, just some would really want to buy one and probably they are not reading this blog. So for us common mortals, it almost likely that in our lifetime, we never get to ride a Brough Superior, let alone own one. This is where passionate biker Gwen Banquer tends to differ from us general bikers. If you can’t have it, build one! Well, I am sure Gwen surely has the capacity to buy Boroughs but his passion for the classic saw him building his own imitation, after all imitation is the best form of flattery, so how else can you tribute a vintage legend? By building a Banquer Superior! Yup, it is a new motorcycle with all the style and panache of a Brough Superior but with a modern engine, brakes and electronics.
Gwen Banquer is a Florida based motorcycle restorer and self-taught motorcycle engineer. For inspiration, he hanged a photo of a Brough superior SS100 and started working on the project with a frame made by the Milwaukee Iron Company and a brand new Harley Davidson 1340 evolution engine. The engine comes with a factory built revtech 5-speed gearbox. The forks you see on a Brough are called ‘castle’ forks for obvious reasons and Gwen, to replicate them did it up with a set of Springer forks made by an American company named Paughco. Actually what you see here are the springer forkes that has been modified by Gwen to ‘castle’ forks. Avon speedmaster provided the wheels that are of similar dimensions with the original Brough SS100. 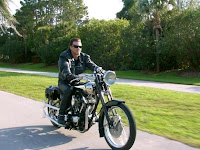 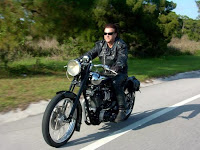 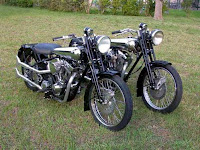 The tank is entirely fabricated by Gwen himself and take a look at those exhausts. Egg-Zak-Lee like the Brough Superior 100SS! Gwen has so far built three Banquer Superiors. And that was his first project. He made another two of his Banquer Superior. While the first had a Evo 80ci engine, the other two are powered by a 100ci Evo developing a whacking 100 bhp that would have made even George Brough very happy. The 220kg bike would definitely enjoy the 100bhp and Gwen says that it produces “snappy, bordering on outrageous performance”
I found this article in the news section of the premier online club on Brough Superior, the Brough Superior Club and this intyerview must have been before he started working on number 3 as there he says “I must tell you that this is the most fun motorcycle that I have ever ridden. The feel is very long, low and lean and with the 69 in. wheelbase and 27-degree rake, the handling is extremely stable yet very nimble and quick steering at low speeds.
This motorcycle feels like one of those special machines from the distant past which riders reminisce about and collectors’ lust after. A great part of the experience, in my opinion, is walking up to the bike, throwing a leg over and sitting on this slightly stiff Lycette saddle and gazing at the abundance of chrome and glistening black hardware, which you feel you've become a part of.
I currently have the frame, forks and several assorted bits in my shop awaiting the creation of Banquer Superior #3. I only await an order from my next customer. I built #1 in only one month from initial design thru final completion and the first drive. I now offer an 8 to 12 week delivery time for each of my Banquer Superiors.” 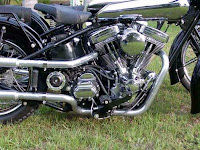 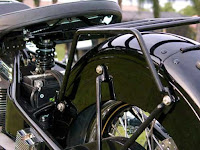 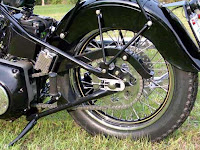 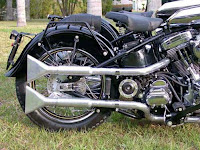 I found out pictures of his 3rd Banquer Superior from his webshots gallery. You can see thousands of photos of his creation in his webshots albums. Here are the links to the Banquer Superior FIRST, SECOND, THIRD as well as some MORE and MORE pictures. And not only that check out his other collection as well.
So Ladies and Gentleman, this is your moment to materialize that dream of owning a Brough Superior, err… I mean Banquer Superior! This is not just a custom built motorcycle. Why, because custom built motorcycles don’t need to cater to any category and follows the visual imagination (assisted with of course trail and errors), here Gwen had to live up to a reputation, he cannot think out of the box styling, there were definite drawings and he has to stick to them as close as possible and to live up to a reputation of a legend like the Brough is something which probably many of us would agree that Gwen has been able to. This custom built motorcycle REALLY looks like the SS100. Kudos to Gwen for replicating a legend as close to the real one as one can get and if you also want a piece of the McCoy, it will cost you approx $36,000 depending on the your requirements.
You can reach Gwen Banquer by email at Cyclegod999@aol.com or maybe you would like to visit him at 2431 Se Morningside Blvd, Port St Lucie, Fl 34952 or you can also call him at +00-(772)335-1917
Source of Pictures - Gwen's Webshots & Brough Superior Club

The Original and the Reincarnations