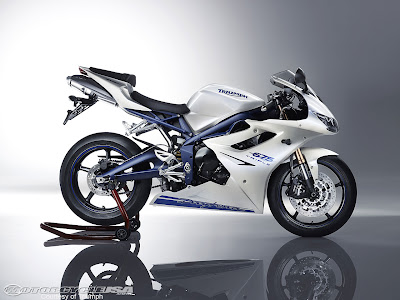 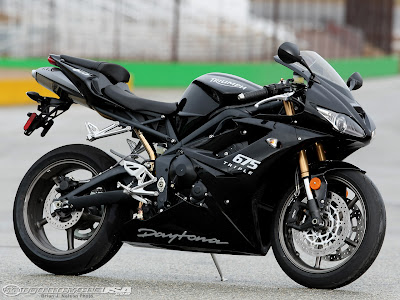 Well, I am not a big fan of faired/ fairing bikes. It's just that I find bikes more beautiful when the engine is exposed. Having said that, I would also like to say that I think that the Ducatis are one of the most beautiful bikes, fairing or no fairing. It would also be a sham and a shame for me if I say I dont find the 2009 Fireblade or 2009 YZF-R1 beautiful. They are very very beautiful. No two words about that, its simple that some of us like the bikes naked. Still, there are certain bikes like those alreday mentioned whom you just cant ignore no matter what. Because when it comes to performance, these Supersports Bikes are a class apart. One such bike which is very hard to ignore is the world's best sports bike. Yes, it has been declared by all major bike mags and critics that when it comes to the total sports package, there is just one TRIUMPH Daytona 675. MCN February 2009 issue has hailed it as the best Supersports bike of 2009 in a class which also had the R6. ZX-6R, CBR600RR and GSX-R600! Motorcycle News, not only declared the Daytona 675 as the best supersport class bike, but the best sports machine of any capacity on the market. The Daytona came out 'triumphed' in a 2,000 mile comparison test on the iconic Isle of Man TT where the other contenders came from Aprilia, KTM and Yamaha. MCN had already awarded the Daytona 675 the title of the "Sportsbike of the Year 2009" over the new 2009 R1 (which by the way has been voted as the best litre class bike of 2009), the very radical and brutal and of course new RSV4 and the brilliant RC8R. It also has been the Supertest ‘King of the Supersport’ crown for four years running. The Supertest event is a collaboration between the world’s leading motorcycle publications and this tear the event was held in the Almeria circuit in Spain and the three-cylinder Triumph proved quicker than the Japanese machines to remain undefeated in the competition, having won first prize every year since the bike’s introduction in 2006. So there is simply no denying the fact that the Daytona 675 is the best Sports bike. Period. And its not just the performance, its a sheer beauty to look at, yes with fairing and all. Take a look at the video and try not saying Aah! I don't know what makes it so beautiful, is it the mixture of Italian and Japanese designs or is it the mixture of free flowing design with angular styling or if it is the traditional Triumph mixture with modern styling, but what I most definitely know is that this is one hell of a looker and if you are still not convinced, then I am sure you haven't looked at the video or else we wont even would have argued here. 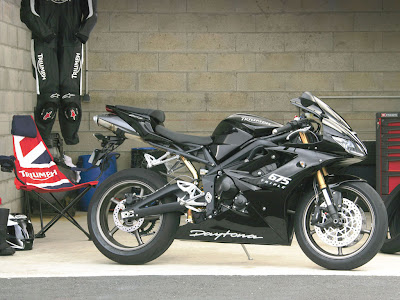 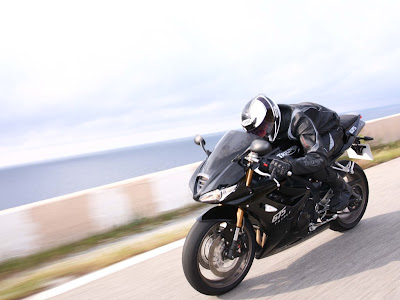 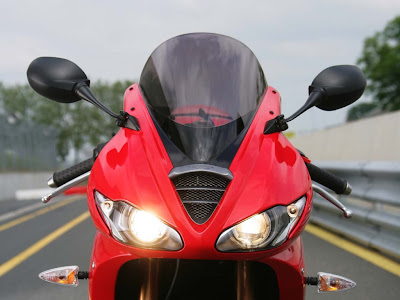 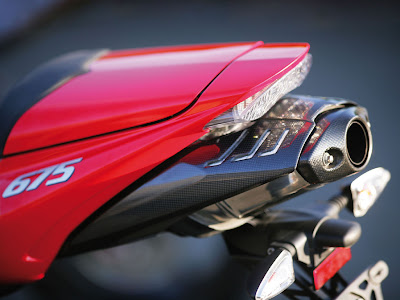 The 675 is of course a direct descendent of the TT600 which began life in 1983 as a four cylinder engine. Then came the Daytona 595 that came in 1997, later named Daytona 955i in 1999 which was originally a 3 cylinder engine and lthen in 2005 came the Daytona 650 as again a 4 cylinder one and finally in 2006 came the Daytona 675 with the 3 cylinder engine. This has been TRIUMPH's best bike ever and thats saying a lot for a company with great tradition and heritage. Its 3 cylinder directly gives it a weight advantage and the exceptional handling makes it a real package. Well, there was always a suspect in the 675 suspension which many a riders complained, now in the 2009 edition, thats has been taken cared of with new fully adjustable front and rear suspension. Even power has gone up to 128 PS from 125 PS. The 2009 model has some 50 technical technical improvements which includes a new front monobloc radial callipers and radial master cylinder that will help deliver track bred stopping power. Also the engine management system has been calibrated to accept the new accessory quick-shifter.
There were some issues with the Daytona, but since its release in 2006, all crtitics have hailed the engine. Since its launch the standard model has won numerous road and track based group tests (as already mentioned by MCN), Cycle World, Motorcyclist, Superbike, etc. The 675 is basically a circuit-developed machine with a full range of official accessories available for the owner to personalize his/ her Daytona 675 and that includes performance kits too like lightweight carbon fibre parts, a ‘plug-and-play’ quickshifter set, race-style rear set footrests and silencers developed in cooperation with Italian race specialists Arrow Special Parts. You can also look goos too as Triumph has associated with Alpinestars to develope a range of performance garments, gloves and boots designed specifically for the needs of both male and female Daytona 675 riders.
In 2006, it was said that there was a 3 month to 6 month waiting period. Triumph had originally planned to build 4000 of these, dont know, but for sure that figure must has widened by now. 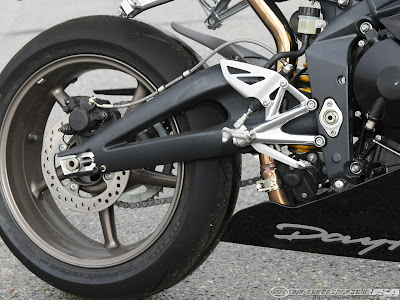 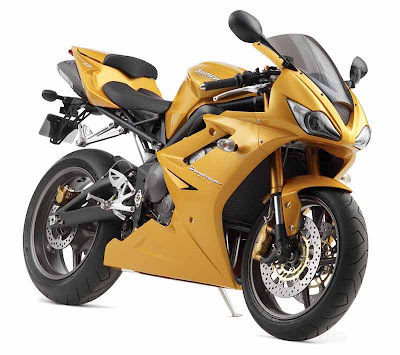 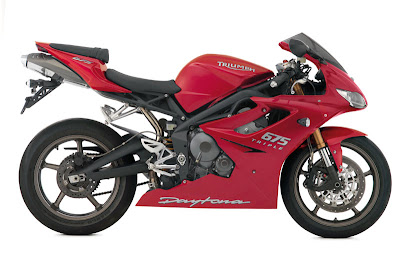 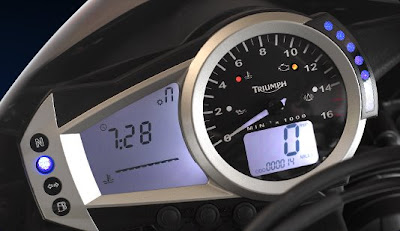 It has been completely dominating the British tracks winning five national supersport titles including the 2008 British series. The sweet handler's plus points are the dynamic handling and a better spread of power thanks to the higher torque figures than other 600cc sports bike.
To go to a more detailed analysis on how thw 675 came into being, the thought process for developing a brilliant 3 cylinder engine actually started in 2000 after the launch of the TT600. As you know the 4 cylinder TT600 represented Triumph's first entry into the middle weight sports motorcycle market and upon its success Triumph decided to convert the TT600 into the

Triumph's heritage and values, that is having 3 cylinders. So in 2001, the Triumph Daytona 955i came into being with 3 cylinders. The next move was to decrease the engine capacity, work out the weight and an increase in performance and so by March 2002, the project moved to the full concept phase. The chassis was initially a chopped version of the Daytona 600. While engine development had not been completed, they worked on the wheelbase, adjusted the head angle, and modified the tank. These changes showed better performance than the original Daytona 600. Later the TT600 design was discarded as Triumph wanted to continue with their traditional free flowing curves unlike the sharp angular aggresive styling found on Japanese bikes which were also there in the TT600. And of course Triumph bikes were traditionally naked. So the prototype was also developed as a naked bike with free flowing design. If you look at the T595 (outgoing version of T955i), you will see that it has somewhat free flowing designs, so it was thought that the model could be based on the T595 and thereby staying close to spirit of earlier Triumph design. Finaly work started on the final stages of the engine and the engine was first tested on a dynamometer in May 2003. Final development combining styling, engine, chassis into a prototype quickly followed and the final prototype testing started in late 2004. And then officially The TRIUMPH Daytona 675 was launched at the NEC International Motorcycle and Scooter Show in 2005. Critics hailed it "the best British sportsbike ever" and "possibly one of the greatest sportsbikes of all time".
The engine has been such a gem that Triumph felt that there was no significant revisions required over the 2006 edition. Only minor decal changes in addition to new colour schemes have been revised like 'neon blue' to add to the existing 'tornado red' and 'jet black' while 2 colours 'scorched yellow' and 'graphite' had been taken out. 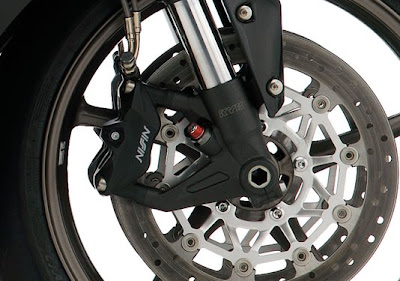 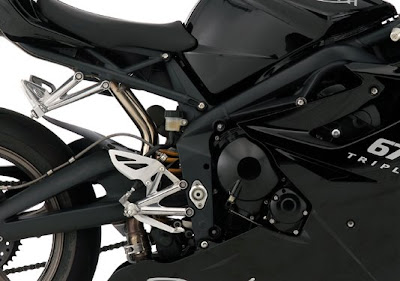 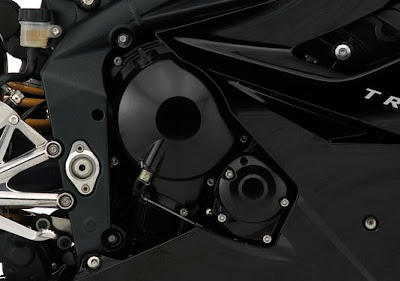 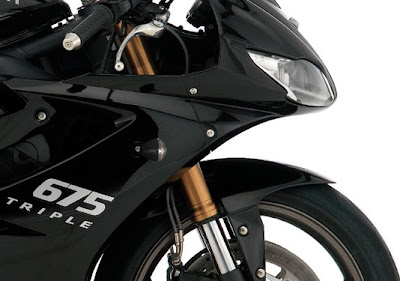 But the 2009 model does have some cosmetic changes like the front fairing, which has been changed slightly to improve aerodynamics and air flow and of course the new model is lighter and has more horse power by virtue of the remapped ECU to extend first gear. Handling has improved through high and low speed dampers. The Daytona 675 Special Edition features a 'Phantom Black' paint scheme (in pearl white), black engine cases with gold wheels, decals and steering nut with blue swing arm and sub frame. Only 160 of this model are being built.
The TRIUMPH Daytona is pretty aggresively priced at $9,799 (surprisingly cheaper than in U.K where it cost £7,589) OTR which is actually cheaper than the R6 and the Special Edition Daytona 675 is available roughly for $150 more.
The Daytona 675 SE has been unleashed upon the world this year which comes in a stunning new livery colour that has been designed to enhance the bike’s sleek and slender profile, with newly styled blue graphics and race-inspired pinstripes on the graphite coloured wheels. Mechanically identical to the standard 675, really, this is one of the most beautiful bikes currently, you just cant argue with that. It has already been declared the 'best sports bike'. So what can one want more? The best sports bike and a stunner to look at. This is the ultimate combination any brand strives to achieve and it seems as of now, Triumph has just played an unplayable ace!
Visit the TRIUMPH Daytona site to book the sweet metal or for more info and images. 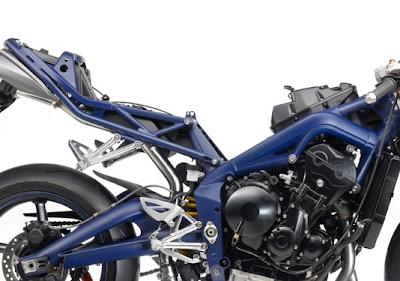 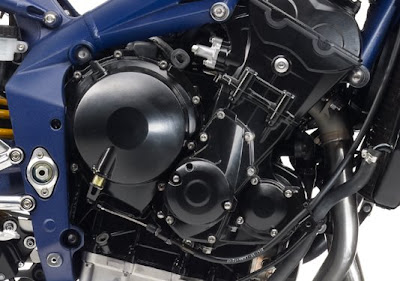 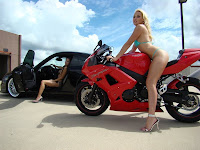 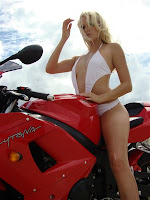 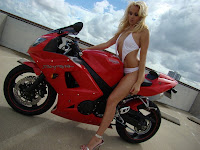