THE BIKE WILL BE AUCTIONED AT EICMA 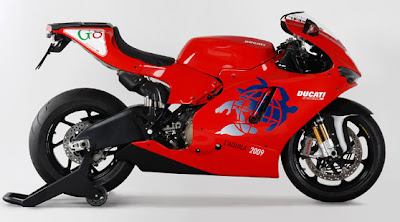 An example of “made in Italy” excellence will be showcased with pride at the G8 summit to be held in L’Aquila. The Ducati Desmosedici RR, a true icon of Italian technology and design, has been prepared with a special livery by Ducati and the Fiera Milano, a unique, one-off design.
The graphics, suggested by the Italian Prime Minister Silvio Berlusconi, incorporate the G8 logo, emphasizing the choice to hold the upcoming summit, from 8 to 10 July, in L’Aquila, the city at the heart of the earthquake that hit the Abruzzo region on 6th April this year. 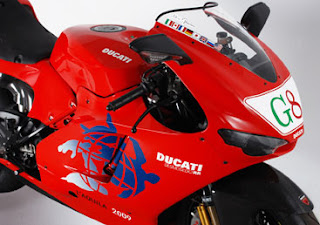 Ducati and the Fiera Milano accepted the invitation to design and create a special version of the most prestigious bike that Ducati has ever produced, the Desmosedici RR – a limited, numbered production run of only 1500 machines that sold out before the bikes were built.
A more emblematic and prestigious bike could not have been selected. The Desmosedici RR is a jewel in the crown of Italy’s motorcycle industry, and allows Ducati to compete and win on racetracks all over the world.
A bike derived from the MotoGP machine, it is the first real production bike to benefit from the technology and innovation gained by Ducati during its experience racing in the world MotoGP championship, a championship in which the Bologna-based manufacturer took the title with Casey Stoner in 2007.
The bike will be exhibited at L’Aquila, inside the building reserved for the representatives of the eight countries that will participate in the summit, as a testimonial of Italian ingenuity and technology. Once the summit concludes, the “Desmosedici RR – G8” will be handed over to the Fiera Milano and auctioned during the 2009 edition of the international EICMA motorcycle trade show, to take place from 10 to 15 November, with proceeds going towards the reconstruction of the Abruzzo region.
“We feel a very strong sense of belonging to the Italian community”, declared Gabriele Del Torchio, President of Ducati, “and it makes us very proud to be able to show what we do to the Heads of State and Government that will participate in the G8. At the same time we also want to contribute to the reconstruction of Abruzzo. Ducati and its employees have already shown solidarity in light of the Abruzzo tragedy. This important initiative, carried out with the Fiera Milano, allows us to help in a concrete way. One can count on our prestigious product, and on the strength and notoriety that a brand like Ducati possesses; Ducati is an ambassador of “made in Italy” the world over.”
The General Manager of the Fiera Milano S.p.A., Enrico Pazzali, commented, “we have collaborated with Ducati, to bring the Ducati Desmosedici RR to the world stage of the G8 summit, for two reasons. First and foremost out of solidarity for our fellow citizens affected by the terrible earthquake of the 6 April. The beautiful Desmosedici RR-G8 will be auctioned during the Eicma motorcycle show, to take place at Rho-Milano between the 10 and 15 November, and the money raised will go towards the reconstruction of the Abruzzo region. Our second motivation is also linked to Eicma 2009: to bring a shining example of Italian industrial excellence to the attention of opinion makers and consumers alike. A level of excellence that our company, Fiera Milano, also strives to adhere to.”
Source: DUCATI through Newsletter
World Ducati Week, September 2010. Save the date. 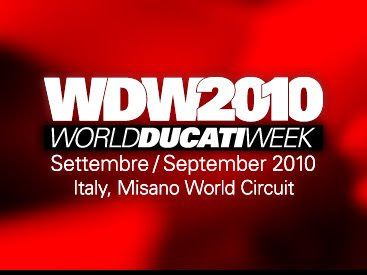 Warm up your engines and get your heart revving! The greatest Ducati gathering is coming back.
The planned date for motorcycle fans of all ages and nationalities to come together is September 2010 at the Misano World Circuit.
Four days of non-stop fun are planned: track sessions, official riders and stunts, evening parties, concerts, motorcycle tours, Ducati Factory and Museum visits, historical bikes exhibitions, conferences, and much more.
The World Ducati Week 2007, the amazing Desmodromic world celebration, was an unprecedented success. There were more than 50,000 presences throughout the event that saw Ducatisti from 28 different nations. WDW means World Ducati Week - the colossal worldwide Ducati rally of thousands of aficionados from dozens of nations.
A veritable legion of motorcyclists and motorcycle fans, meeting at the Misano World Circuit in Misano Adriatico, Italy to have fun and celebrate their love for bikes.
Since its first edition in 1998, the Misano World Circuit is the perfect backdrop for this celebration of everything that is Ducati. For the occasion, given the prevalence of the well-known main Ducati colour, the circuit turns red from tip to toe, reshaping itself into a "Red Planet" where Ducati fans feel completely at home.
The 2007 edition of WDW took place from 28th June to 1st July
Source: DUCATI through Newsletter and WORLD DUCATI WEEK