The Edgy and Distinctive SUZUKI Katana 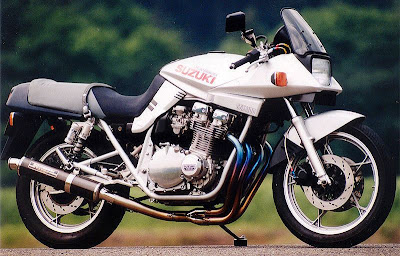 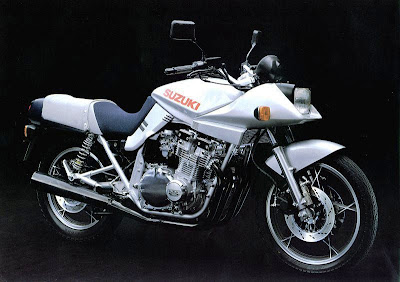 You have heard about the SUZUKI STRATOSPHERE right? Yes, it is a prototype but the 184 hp 1180cc in-line 6 is coming up this year. And you also know that it’s a decedent of the hallowed SUZUKI KATANA. What is that about the Katana that Suzuki has modeled their most ambitious project on it?
The Katana began its life in 1980 made it to world production in 1982 and was last produced in 2006. There were various models from 250cc, 400cc, 650cc, 750cc, 1000cc and 1100cc. However, it was the 750 and above bikes which gained prominence for it’s in line 6 cylinder engines. Not many production houses have history of 6 cylinder bikes, the ones that readily come in mind are of course Honda’s CBX and Goldwing and Benelli’s Sei. The first or let’s say, ‘original’ Katana was designed by a firm named Target Design. Target Design hails from Germany and is still active. They were approached by the native Suzuki firm to design a locale specific bike. There are lots of stories there as to who had actually designed the bike, all of them part of the team of Target Design at one time or another.
These were designed with the sports touring concept and critics were skeptical about its appearance although it turned out to be a huge success. Later it also was manufactured in America and it turned out to be a huge success story there too. 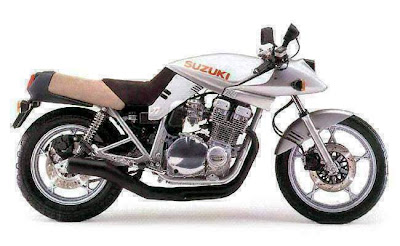 The word Katana means sword in Japanese and its distinctive appearance is the curved, slender, single edged blade with a long grip to accommodate two hands. This original design was a 650 cc model called the ED-1 (European Design 1) which featured a forward nose and a shaped, blended fuel tank with a merged fuel tank-to-seat arrangement. It was so out of style or to put it, so out of time. Norms at that time were of course the flat rectangular tanks with bolt-on accessory fairings so the new design was probably a risk the designers were willing to take and also deep down knew that it would stand out. The other thing was that the design was for a reason, to favour the aerodynamics and after various wind tunnel testing, it proved to aid stability during high-speed. If you search the net, you will find a similar design on a prototype MV Agusta which never got into production. Ironically, even that model was designed by Target Design. In fact when it was launched in Cologne in 1980, most people thought it was a concept motorcycle which would not make it to production. But Suzuki released the bike as per the showcased model with additional improvements and changes here and there. Target Design had apparently spent a lot of time on the bike finding the suitable position which is most essential for touring bikes. The large capacity tank blended with the small fairing blended together for the best airflow were not just for stunning appearance.But just being supremely aerodynamic doesn’t mean that Suzuki is going to revive the design after in their prototype Stratosphere. The Katana was the fastest mass-production motorcycle in the world when it was launched which meant that the new looks were matched by unprecedented performance levels. 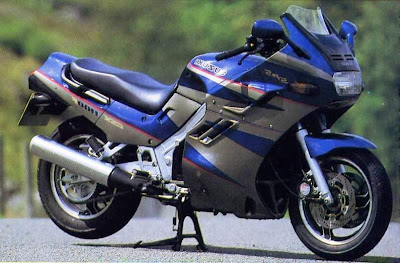 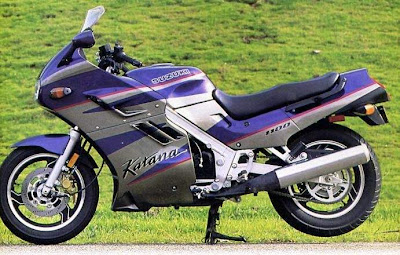 In the same year of ED-1, came the ED-2 at the Cologne Motor show and this time it had a much bigger engine, the 1100 cc model which was based on the Suzuki GS1000. In 1981, came out the actual design which hailed the ‘Katana’ looks from there on. It had everything. And that was the start of a new definition in biking as the ’Katana’ became immensely popular all over. The offset petrol filler cap from the tank’s centerline, those overlapping dials on the instrument panel and literally everything became a style statement.
There were also other versions as mentioned, like the 750cc and a 1000cc, all were basically carrying the exact traits of the 650 or the 1100 version. The 1000 cc version was promoted as a racing motorcycle.
Actually it’s not just the Stratosphere that Suzuki has got the genes of the Katana incorporated to, the hallowed GSK-R series is also a descendent of the Katana. And of course indirect descendents too like the GSX-F and GSX-E series.
The various models of the series comprised of five basic models GSX600F and GSX750F that came out between 1988 – 1997 which were reincarnated in newer styles from 1998 – 2006 and between 1988 - 1993 came the GSX1100F. There models were mainly for the U.S market. The same GSX-F models were also running in Europe but without the ‘Katana’ moniker. Moreover the name Katana came into the existence of European customers of Suzuki in 1999 through a couple of 50cc scooters! Now the design has reappeared in the form of the Stratosphere which made its debut at the 2005 Tokyo Motorcycle Show with a new transversely-mounted narrow 6-cylinder engine. 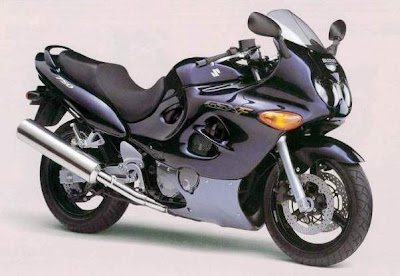 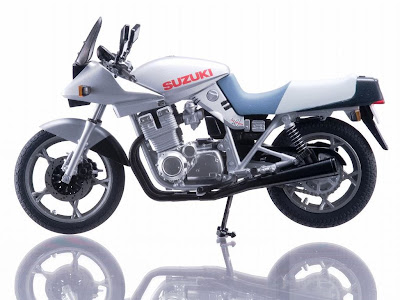 The Katana series of bikes had round slide carburetors as opposed to the CV types and hotter camshaft timing to allow for a lack of cubic capacity. There came a special 1100 cc variant, the E27 that was denoted by the suffix SXZ which had variations on the brakes, clutch, camshafts, had spoked wire wheels and slide carburetors that have become a collector’s item now because it had even more power than the standard 1100 cc model. The smaller versions of 250cc and 400cc were released in 1990 but they catered to only the Japanese market as Japan still now has a huge market in sub 500cc naked street motorcycles. The thing was that Suzuki was always reinventing the Katana series with minor or effective changes and they did that to the entire bigger fleet of bikes. Even the 1100 cc was reintroduced with very minor differences from the originals, even running early 80s narrow tyres. There was a Special Edition 750 cc version, the Katana 750SE with a pop-up headlight. These bikes over time… and probably Suzuki wanted it that way… whatever the reason was, the engines stayed the same and all those variations were only physical. After the 650, came the 1100 and then came the 750 cc intermediate brother wearing all of big brother’s clothes. 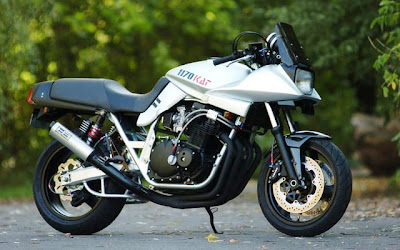 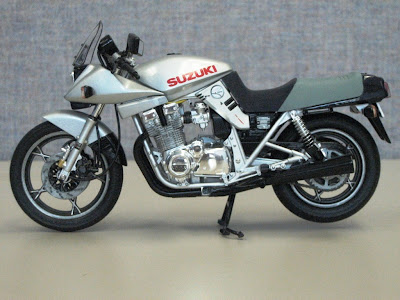 The 1981 GSX750SX and 1982 GSX750SD were identical except for the colors. Again for Japan only, there was a GSX750S which was without a windscreen and the one with a screen was called SS. Then there was the GSX750S Katana Mark 2 model released in 1983 which was longer, wider and higher than the original but shared the same wheelbase. The 750 series has power outings of 69 bhp initially followed by 72 bhp in the 1983 model and later models had 77 bhp.But in 1985, GSX750SE got a completely new model, not just a facelift. It was designed by Suzuki engineers in Japan but it still kept the original ‘Katana’ lines. The air cooled engine had been replaced by the new oil-cooled 16-valve unit from the GSX750E/ES/EF, and developed 90 bhp. It had the Suzuki Full Floater suspension rear end and Positive Damping Forks at the front. 1985 was the last year of the GSX750S. Only cosmetic changes were made, the gold paint had been used only for the wheels. The model was very short-lived. For domestic market in Japan, the model code was GSX750S-4, GSX750SF in Europe. But the engine makeovers were minimal. So the hottest bike of the early 80s in terms of performance were slowly getting beaten by smaller bikes at we entered the 90s, but Suzuki was not perturbed as the Katana lovers adored it more for its radical styling which still today can be said as very different from what you see normally. But critics ripped apart Suzuki. And not only critics, there were many Katana lovers too. 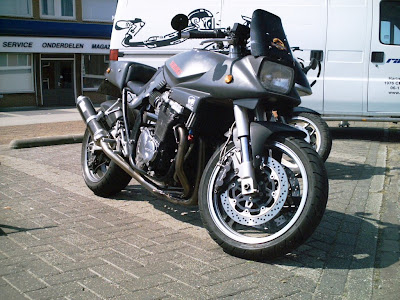 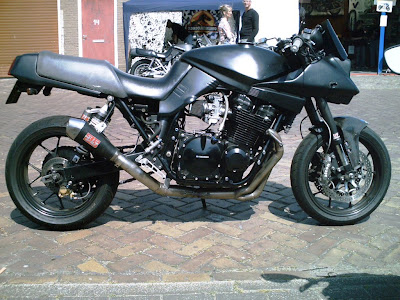 You see, from the meaning of the work to the original motorbike, Katana represented a ‘fast lethal devastating’ kind of a bike which by the 90s became associated with slow heavy and dated sports tourer. And not to mention the scooter series in Europe. In terms of performance, the later models saw substantial rise in power to as much as 100hp in the 750 version from 84 hp but at the same time there were bikes in the 600 category which were running with 130 and more horses. If Suzuki kept up with the engine with the times, Katana might just have been one of the biggest names in Motorcycling history. But that was not to be and the ‘original’ Katana was lost forever… or probably not as speculations say that the Stratosphere will just have Busas for breakfast before moving on to ZX-14R and the likes.Katana for Suzuki became more of a styling icon. Many of the Katana styling cues have been visible in other brands since the 80s. Even today, you find features of the Katana in so many bikes, especially the sports touring category. The fact that modern sport motorcycles generally have fairing and seats that visually merge into a sloping-at-the-rear fuel tank is directly traceable to the original Katana ED1/ED2 design series. 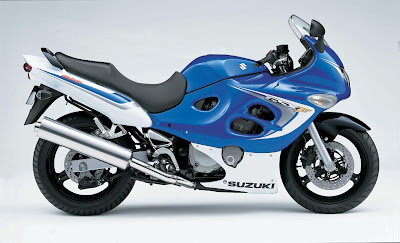 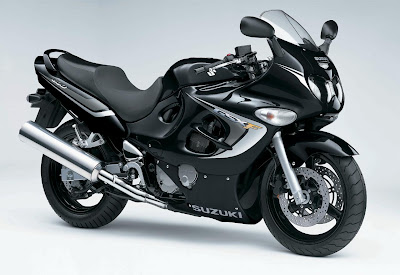 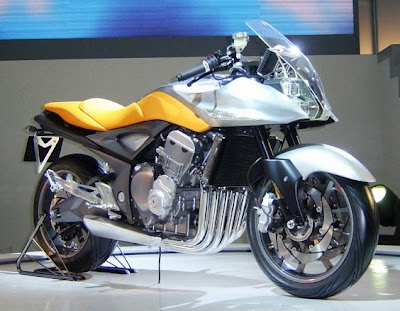 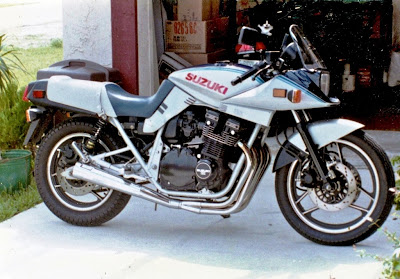 The upcoming STRATOSPHERE and the original KATANA
The following pictures below have been sent by DOUBLE OH TWO, a fellow blogger who has a lot of beautiful collection of images of bikes and other stuff. Check it out! You will probably like it.The photos appear in the blog Diary of a Grey Ghost 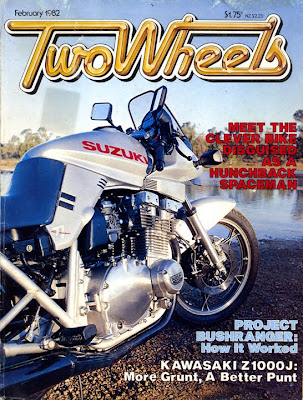 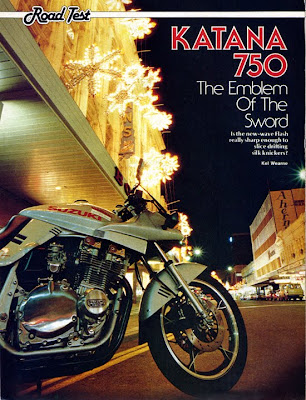 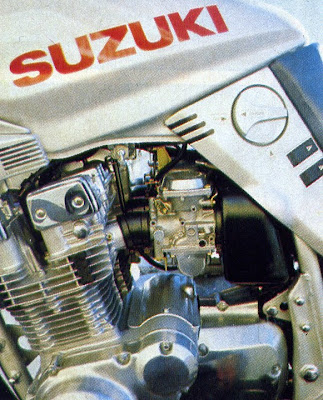