In The News - New Custom and Factory Bikes 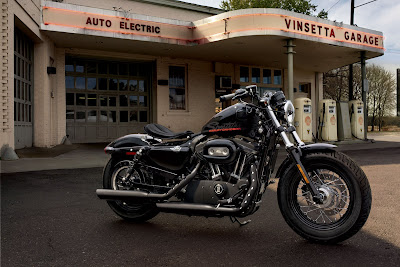 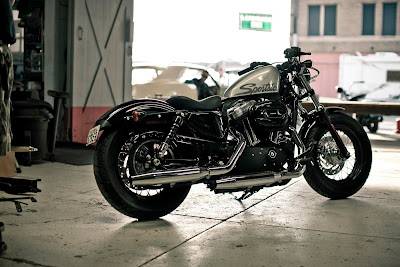 The Harley Davidson FORTY-EIGHT
If the Sporster was not beautiful enough, HD just had to release a new factory custom range for this bike with drop dead looks. This is the new Harley-Davidson® Forty-Eight™ motorcycle which has the ‘custom’ look to it. What stand out at the very first look are the neatly done stickers on the tank and the high quality finish in black. The looks may be retro inspired but with the rubber-mounted Evolution 1200 cc V-Twin engine assisted with Electronic Sequential Port Fuel Injection (ESPFI) and a broad torque curve, this bike has performance under that classic "peanut" fuel tank, low solo seat, under-bar mounted mirrors, clean rear fender and fat balloon tires.
The ‘rebellion’ HD introduced in 1957 retains the classy spoke wheels and the short dual muffler pounds out the distinctive V-Twin sound. With forward foot controls, large mirrors on the handlebars, low profile custom handlebar, a unique dual texture solo seat with accessories like a passenger pillion, foot pegs and backrest, the bike will be available in three colours, Vivid Black, Brilliant Silver and Mirage Orange Pearl at a rate of $ 10, 499.
Link: Moto Caradisiac 1 & 2 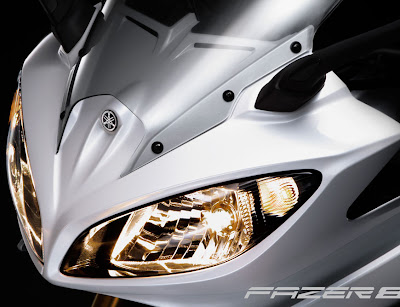 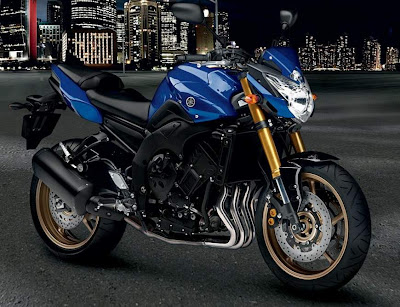 Official Pictures of YAMAHA FZ8
Well, the official pictures of the much awaited YAMAHA FZ8 are out and this time it is not leaked, these are company pictures. But you still have to wait for the bike. The net has been having quite an activity with Yamaha lovers setting and doing their own designs as how this naked potential all rounder placed between the FZ6 and FZ1 would or should look like. Yamaha has not disappointed its fan and has made quite a beautiful bike with nothing radical, all in place as expected and a familiar design which looks good. The standout feature would still be the beautiful headlamp with the Yamaha logo on the pilot light.
The bike is seen as a sure fire winner, mainly because it promises to combine all the easiness of the smaller FZ family with the touring capabilities of the bigger sibling. Look wise it carries almost all the FZ characteristics except for the mentioned headlamp and a few other features like a more triangular design exhaust.
Any further information on performance is not yet announced but it is certain that the FZ8 will take on all the 750cc to 800 cc engines whether it is a triple or an in line four. Yamaha has announced March 12, 2010 as the official date of the launch of the FZ8. Both the pictures here are from the official Yamaha Motor Europe website. Whether this is going to reach the shores of U.S is not quite known as there has been no official release from Yamaha.
The official Yamaha Europe FZ8 website asks you to ‘Stay Tuned!’ 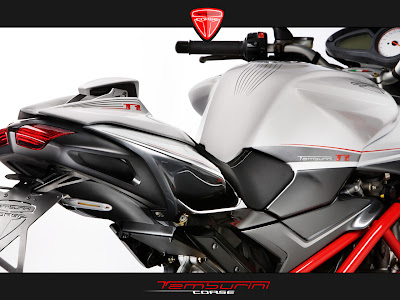 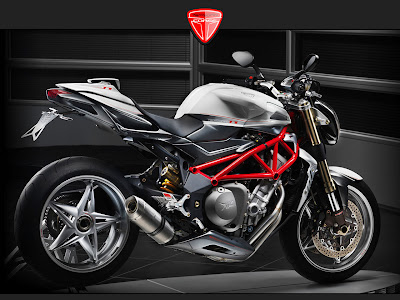 Tamburi T1 by MV Agusta Corse
How can you improve perfection? Give it to Tamburini, I say… err… not exactly Massimo Tamburini, but you can give it to the same house. What I mean give it to Andrea Tamburini, son of the legendary Massimo Tamburini and you bet he will improve perfection to a new level. Well, by now the pictures of the Tamburini T1 from MV Agusta Corse must have made you realize that the son has inherited the genes from his father in the highest possible way. ‘The meticulous craft of perfecting what already seems perfect,’ says the Tamburini Corse website. The Corse wing is set up by Massiomo’s son Andrea in San Marino and what it offers is not for us mere mortals. Catering only to MV Agusta and Ducati bikes, it is a high quality accessory house for the hallowed bike customers.
I really do not need to emphasize on the quality as you just need to see the pictures of the Tamburi T1 in its original size to let your jaw drop off. It is really not possible to imagine how one can even further improve the MV bikes, at least not until you see the products. For those who have money to spend, they go get a Ducati or an MV and when they have more money to spend, they can just visit the Tamburini Corse studio in San Mariono. This is easy awesome and as awesome as it can get. I bet only God could have imagined a bike like this and somehow he made the Tamburis have a dream.
Visit the Tamburi Corse Store and you must visit the gallery to have a look at the T1. Believe me, it will make your day. 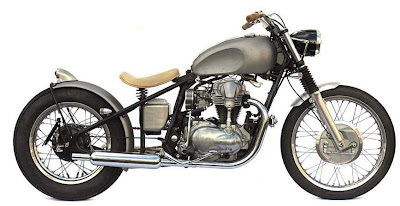 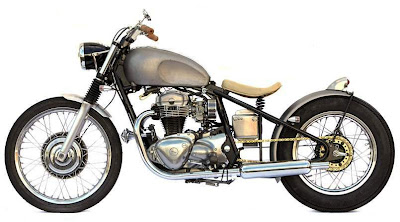 ‘Sacred Cow’ by Deues Ex Machina
The hardcore Aussie custom designers Deux Ex Machina has pulled off a brilliant machine once again. Known for their naked metal bikes with very minimal clothing and an edgy distinctive look, you can spot a machine product by the look of it, a typical bare bones bike with extreme detailing, never ever over done but to a point where you just have to admit the brilliance of the team of Jennings, Rod Hunwick and Carby Tuckwell.
Their tag line says ‘Motorcycles for the post modern world’ and you know where there theme lies in. Their new product ‘Sacred Cow’ has probably sacrificed functionality for undeniable style, but look at what a clean product this is. And Mr. Billy Joel is too proud a owner of the donor Kawasaki W650 which he wanted it to be styled in a 60s bobber design and he also wanted a bigger bore, so the ‘Sacred Cow’ has infact a 720cc engine. In fact, Billy wanted a hardtail frame, so the W650 was it and now with 21" front wheel, spring-mounted saddle, handmade tank, Billy is all set to ride the beauty in east end of Long Island which Billy mentions ‘where there's plenty of twisty back roads, beautiful natural scenery and picturesque fishing villages.’
Link: DEUS EX MACHINA 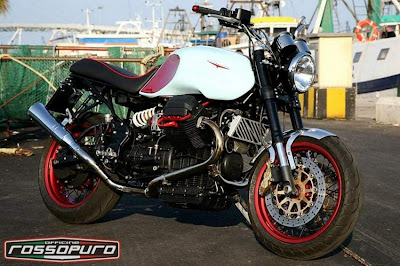 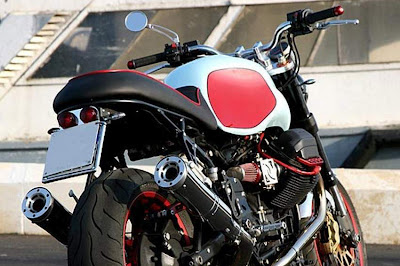 ‘Coppa Acerbo’ by Filippo Barbacane
Another beautiful custom bike here is the ‘Coppa Acerbo’ made by master designer Filippo Barbacane. Now we know Mr. Barbacane specializes in Moto Guzzi and this is no different. This beauty is based on the ever beautiful Moto Guzzi V11. The ‘Coppa Acerbo’ name refers to a race that was held in Pescara, Italy, from 1924 to 1961, which was then renamed (Circuito di Pescara) as the creator of the race, Giacomo Acerbo, was a government minister during Italy’s fascist period. The race was more than 25 kg long, and much of it was on a city track. This special edition Moto Guzzi features “Alpine” spoke wheels, hand-built chrome exhaust, aluminium front mud guards, and an Ergal transmission shaft. The seat is wider than that of a classic V11 and the rear lights are also new. This particular Moto Guzzi Coppa Acerbo has a few extra modifications from Rossopuro, specialists in Moto Guzzi accessories.
Link: Filippo Barbabcane 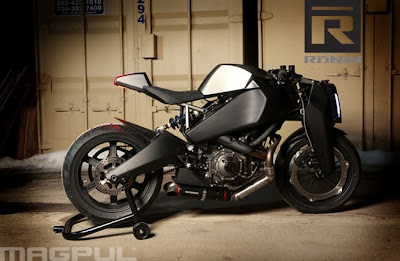 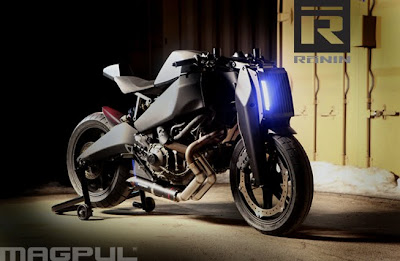 Buell 1125R based Magpul Ronin
And coming to the last custom bike, I really do not know what to make of this bike, but it is bloody fantastic. This is the Magpul Ronin, a very radical looking bike with quite a few futuristic imaging (just look at the headlamp, is it a headlamp? BTW) and the razor sharp cues and all this is mixed with something from the 80s, you know Mad Max style.
According to the official website, The Magpul Ronin is an experimental motorcycle project based on the Buell 1125R sport bike. The project itself represents the first iteration of a design exercise inspired by interests, hobbies, and passions shared by many within Magpul. Taken from the Japanese word for a samurai who lost his master, the name "Ronin" was chosen after the Buell Motorcycle Company ceased production and closed its doors in 2009. The model 1125R was selected due its high level of performance and aesthetic potential that were never fully realized by Buell as a subsidiary of Harley Davidson.” Yes, the engine is from Buell, but you get so caught by the design that you really forget to analyze the machine.Anyway, so, what we get to know is that it is still in the design phase. Oh, by the way, what is interesting is Magpul is a gun and rifle magazine innovator. And if you would like to know if it is only going to be a prototype or will cater to customer feedbacks, on the website, it is written “Due to the experimental nature of the project, it is not yet known if Ronin motorcycles or Magpul-designed components for the Buell 1125R will be made available for purchase. More information about Project Ronin will be released as the design progresses’. So there you go. But you can of course visit the MAGPUL RONIN website to have a look at the bike.