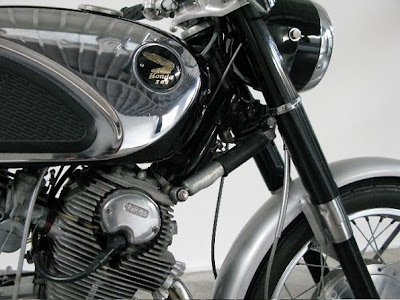 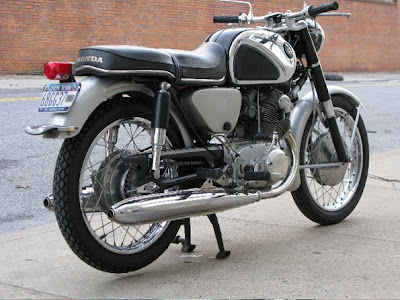 In the early 60s when Japanese motorcycle companies were starting to breakout and dominate the erstwhile British dominance on 2 wheelers, a certain product from Honda was leading the brigade. This was the Honda Superhawk CB77 a.k.a the Dream, a 305 cc twin-cylinder motorcycle and was on production throughout the 60s.
What was so riveting in the Superhawk was its reliability and ease of use, something which the British bikes couldn’t really boast of at that time. It was not the best of lookers, but Honda knew that a mass population also looks at 2 wheels as a means of transport with the least of hassles. The CB&& was robust, its overall fit and finish was very commanding and the motor was very precise. All these qualities really tilted the favour towards the Superhawk CB77 and it was one of the big success stories from Japan. 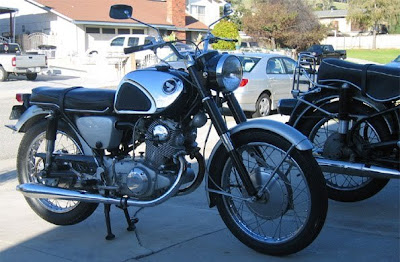 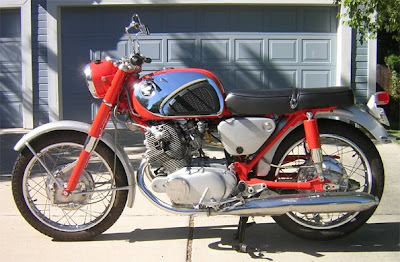 In many markets the 305c model was also known as Dream Super Sport. Later, Honda made a more affordable 247cc version of the CB77. This model was also known as CB72 Dream Sport. Actually there were many variations on the subject with Honda trying all out to please the customers. And lots of confusion too. The Honda models in US started out with the name of ‘Hawk’, especially the CB72, but whether these were imports or whether they were actually built in the U.S are not very clear. In fact, some say the ‘Hawk’ still continues in the U.S and the model Nighthawk 250 is a derivative from the original series. The thing is that the CB72 and CB77 were tube framed while there were other pressed steel framed models which were fully clad in sheet metal like CA72, CA77, CA78, basically all had the bikes did differ from each other but the overall appeal was was kept similar. The ‘Dream’ series as mentioned differed in the frames while the motor was similar featuring a 360 degree crankshaft and single carb. The other main difference in the sheet metal series was that they were made with a more touring spirit and U.S has largely a relaxed biker population compared to the Europeans who were more performance oriented which they got from the Superhawks. 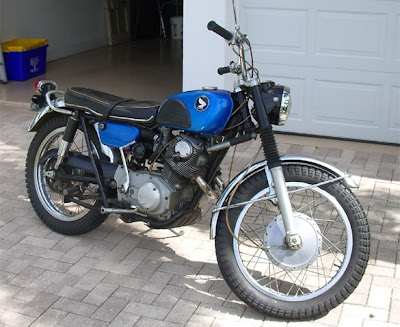 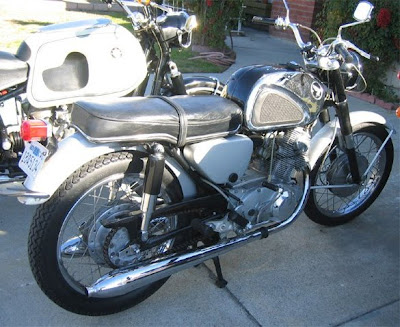 And then there were spin offs from the CB77 and CB72 and all original Hondas. The engine was so damn good, that Honda knew that it can make its own market in any category. There were Scramblers, off road bikes and what not. Of course you would remember the famous Scrambler, Honda CL77. The main difference beside conventional cradle frame to improve ground clearance was the gearbox ratios to allow for the Scrambler's intended use as an off-road bike and to give it a more off road feel, the electric starter was taken out. The CL utilized a dual-carburated motor with high-clearance exhaust pipes. There were off roaders like the CP77. But Honda didn’t stop at that they took another step when they derived the CR72 & CR77 series – the racing variants of the Superhawk. So mainly there were 3 series, the Superhawk that is the CB72 & CB77 found in Europe, The Dream that is the CA72 & CA77 found in U.S and the Scrambler, the CL77 & CL72 which was for both markets. So popular were these bikes that Honda also produced a limited number of the CB77-based Superhawk Full Dress Police bikes, designated CYP77 which a solo seat, a rack with a ticket box, front and rear crash bars, a speed trap speedometer and a cable driven mechanical siren. There were other versions and that was the CB71 7 CB92, but only available in Japan. So you can well imagine if you own a Honda CB72 or CB77, exactly what a rich heritage it has! 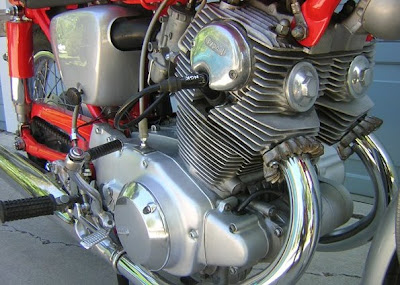 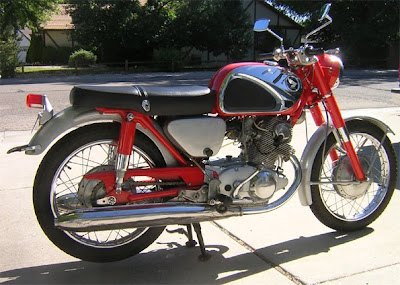 They also have a rather good and interesting racing history. Honda had built the CYB77 Superhawk Road Racer. It met good success in road racing circuits and many of the components of the bike were made available in its CB72/CB77 parts manual as factory parts using the part number prefix CYB77. The road racer had megaphone exhausts, clip on handlebars, special road racing seat, shortened fenders, rear peg gear shift and brake linkages, a telescopic damper for the forks, plus numerous other part options which could be ordered from Honda. Also in 1968 Larry Berquist and Gary Griffen won the second official Baja 1000 race on the Scrambler CL77. 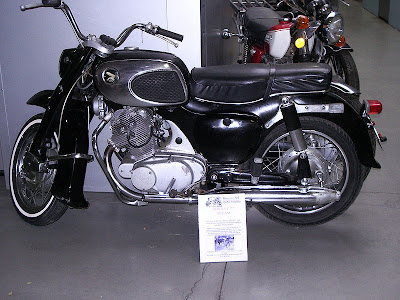 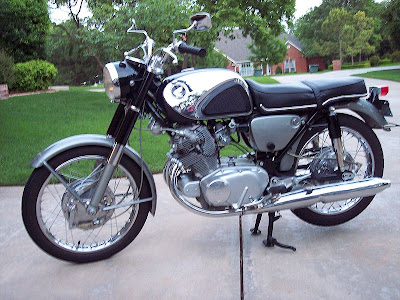 Going inside the motorcycle details, you find that the CB77 used its motor as a stressed member of the frame which strengthens the frame and also improves the handling compared to cradle frame designs. You know many a Honda models had this thing that to kick start the motor you need to close out the front foot peg as the foot peg comes in way of the kick. These models didn’t have them as the kick and the foot peg were closely located, but then for these models, you had to fold out the rear foot peg! Now going back to history, we all know about Soichiro Honda’s visit to Europe in 1955 which literally changed the face of motorcycles. It won’t be wrong to say that that the roots of this change actually ended up with the production of the Superhawk or the Dream. 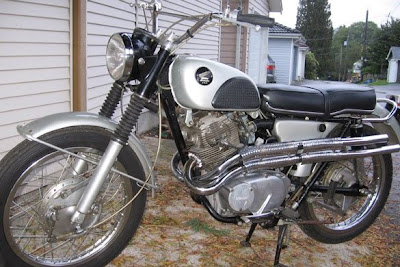 Soichiro Honda did have the dream of building complete motorcycles although probably no one other than Soichiro understood what complete meant for him. So after his visit to Europe, a major influence on him was the visit to NSU Motorenwerke AG in Germany because you will notice that the subsequent bikes shared similar design in the engines and frames. So Mr. S. Honda started his ‘Dream’ series in the mid 50s with the C70 which was a 250cc pressed-frame bike and that was carried to the later bikes. The C70 was released in 1956 for the Japan market and was named the Dream. The bike had a single seat & rack, with clip-on pillion pad. Later came the C75 which was the 305cc version. They had a square head-light & shocks, leading link forks with pressed-steel handlebars. The engine was dry sumped, and had 6v electrics. And that was where the rich heritage started. Things moved on and finally when the CB and CA series were launched, they had alloy overhead cam twin cylinder engines with 12v electrics, electric starter, indicators, dual seats and other advanced features, not common to most motorcycles of the period. The 305 cc overhead cam engine had a redline of 9000 rpm and contrasted sharply from the low-revving European and American bikes of the day. 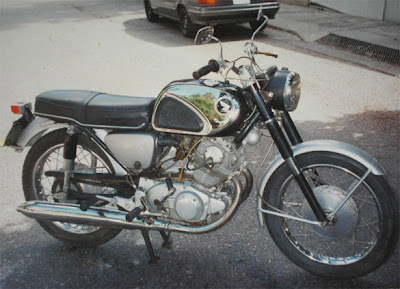 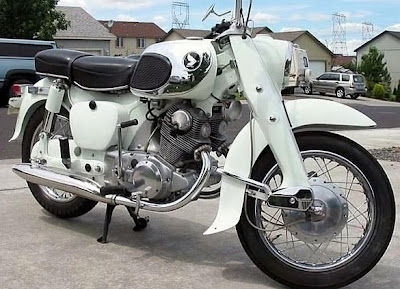 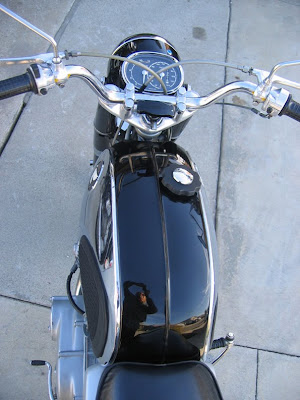 Anyway, back to the original topic, not only did people preferred it for its reliability, even in performance, it was better than the British bikes. The fastest British bike within the cubic capacity territory then was the Royal Enfield 250 single which was producing around 20 bhp and had a top speed of around 130 kmph. With full throtle, the 305cc model with all of its 24 horses galloping together at 9000 rpm could reach upto 135kmph. The smaller version also was quite powerful which belted out 20 bhp at 8000 rpm. As Honda got a very positive feedback and knowing very well that the frame and machine could hold up more power, later the power output was further increased to 28.5 bhp at 9000 rpm and still the Superhawk was able to handle it quite well. In fact, besides being powerful, the bike was so agile and nimble that it easily outperformed many bigger machines. The later model could run speeds upto 145kmph.
It will not be wrong to say that if the CB750 killed off British dominance, then it was the CB77 which started it all. And why not, how could you not prefer a bike that doesn’t leak or spill oil, is smooth, requires minimum maintenance and even for a 300cc bike, you get to start it with the flick of a switch. The Dream or Superhawk 305 motorcycle followed in the footsteps of the legendary Super Cub enjoying healthy sales though out the 60s. Like the Super Cub, it was light and easy to handle. It could be dressed up with saddlebags, luggage racks, and a windshield to increase its usefulness both as a commuter and a touring bike.
The bikes were not sportsbike in the real sense, they were not meant to be, they were more of the standard touring bikes but even in the same context, as mentioned they could outperform many bigger bikes. Probably having all these characters in a single bike was what Soichiro Honda meant by the word ‘complete’.
Source of most pics: HONDA 305, an excellent site for information, photos, used bikes, restored ones and anything related to the legend.