Zephyr & other Beauties from Wrench Monkees 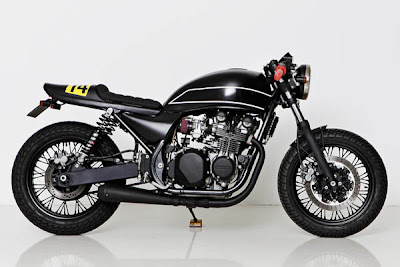 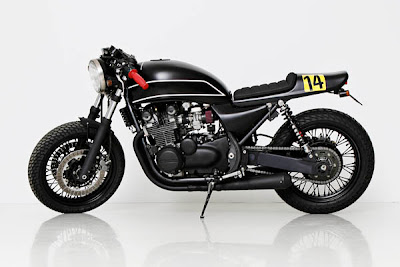 Denmark is not just about their Danish pastries and heritage of Viking warriors, there is much more to it and you know that. To add another feather, they now have a very talented custom bike team by the name of WM. WM; short for Wrench Monkees has been on probably everyone’s radar for some time now with their naked café racer customized bikes as evident from their features on various magazines, websites and blogs. Most of the works are originals on Japanese motorcycles although they work on all motorcycles and I was dumb enough not to post any of their creations. Today… tomorrow got to a few months but when I recently checked their website WRENCH MONKEYS and saw their latest creation, the KAWASAKI ZEPHYER, it was something I needed to do it there and then. This is a standard Kawasaki 750cc machine is made to order for a customer, Mr. Mickee. This is the Zephyer 750 cc in line four (previously I had written twin. I stand corrected by Mr. Neil who was kind enough to mark out my mistake. The Zephyer came out in various sizes from a 400cc engine for the Japan market to a 550cc for the U.S market to 750cc and 1100cc, but all of them were in line four and looked same. The 750cc came in the 90s. Thank You Mr. Neil for pointing it out). What WM had done is give the bike an enhanced look to stand out anywhere. The frame is standard, the engine is untouched. The front fork, swingarm and rims are standard. So what have they done actually? The all over paint including the painted engine covers, all the wirings, the megatron muffler are made in house. Also the rear end, that beautiful seat and of course the beautiful front fender and then the rear light are all designed by Wrench Monkees. They haven’t mentioned about the handle bars but looks to be customized. I really like the red grips, it is reflecting beautifully against the glossy black paint scheme of the bike. The #14 probably refers to the series of make as they number each bike they have customized. The front tyres are 120/60-17 and rear tyres are 160/60-17. The bike really looks delicious and the overall high quality paint job has to be appreciated for the look. Nothing much has been done, the bike gets a total black colour including the engine, a reworked front console with only the speedometer and the wheels have rims instead of alloys. But everything has added up beautifully. 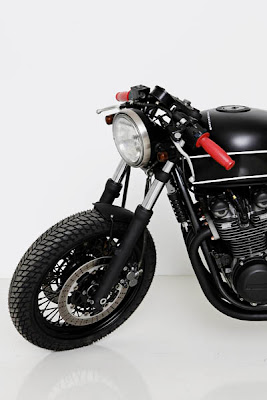 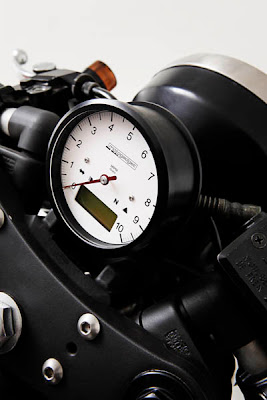 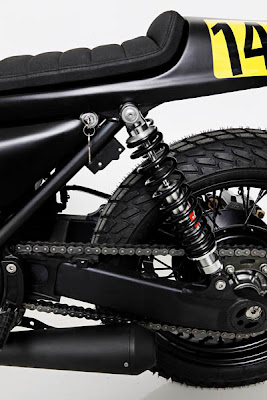 Wrench monkees constitutes of Per Nielsen, Nicholas Bech and Anders Invartsen. Per is the Crew Chief at Monkee headquarters. With a degree in tec hnical designing working out to his advantage, he has been building bikes for the past 2 decades. Chasing his lifelong dream of having a custom bike firm, he envisioned Wrench Monkees in 2006 along with his buddies Nicholas and Anders. Nicholas is very happily married with two kids and is the designer of the unit and as such is the man welding the hammer. He is a photographer with an undying passion for arts including motorcycles. He draws inspiration for his design from different underground subcultures and is also responsible for maintaining the blog. The third angle of the triad is Anders, also a photographer. Anders has been working under Per building and customizing bikes for the last decade. He looks at all the elctricals related thing on their bikes. Ask me, that is the most non rewarding part in designing a bike. You go unnoticed trying to hide every red, green and yellow wires, but if for some reason the bike gets faulty, you head is the first in line. So beside doing the thankless part, he also builds the fibre glass parts. It is interesting to know that to relax their minds after a hard day’s life in the garage, Anders seeks solace with his girlfriend and baby daughter while Per becomes a drummer for rock bands! 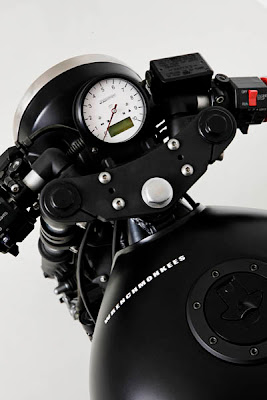 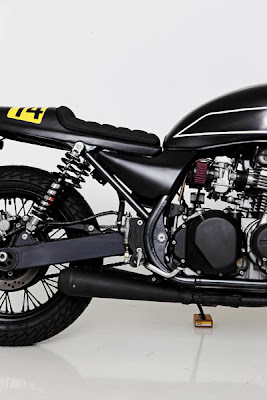 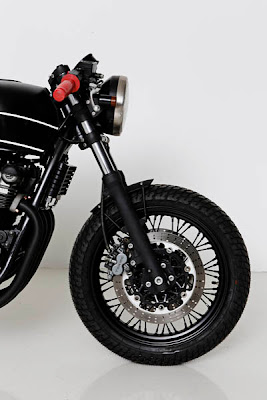 Despite the fact that most of their products have been café racers or bobbers or just standard, they are open to anything. It could be anything from a Japanese 250cc to a German 650cc to a British 1000cc to a big American 1400cc or just an exotic Italian. Styling can vary from a compact performance bike to a free spirited custom. Nothing really matters not even the number of engines. So even if you have a small 250cc little known UJM, you can approach them with your plan and long time goal and they will even help you out. Just tell them what you want and if it is even remotely possible to get your whimsy demure bike to a pocket rocket, they would do that or suggest you the best possible near thing. Getting it legal on the road of course will be an issue the customer would have to deal personally or better still tell them to stick to specifications which are legal and they will just do that. As such, all of their bikes have been street legal. And they either fiddle a little (read Standard modification) or change the entire damn thing (fully customized). In the standard version, the frame remains unchanged and the frame does it with original suspension, engine etc. Only the things which are not available in original are replaced. They do such to keep the bike street legal. Even in the custom bikes, they see that there is minimal changes to the frame to keep it street legal while the wheels, suspension and engine goes for a change as per the customer’s specifications. 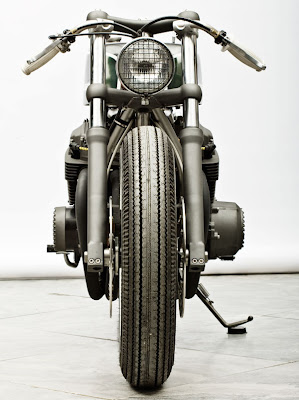 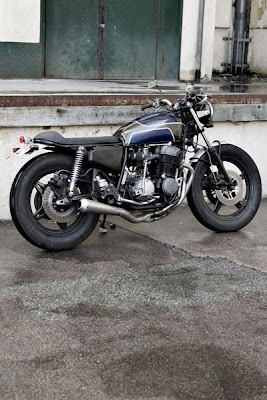 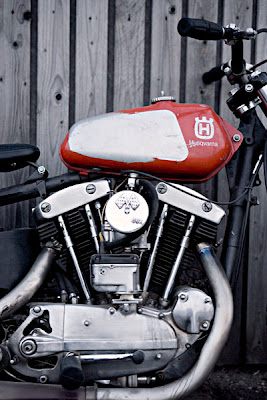 2 different CB750 and a Sportster with Husqvarna tank
They sale whole bikes with all papers and documents or if a customer wants, they also customize the owner’s bike. They deliver anywhere in the world, right at your door step or you can even collect it personally from their garage.
And so what about the cost? Well, it all depends what you want to do, but yes to get a rough figure, do not expect anything less than $12,500 USD. It will go north of that figure depending upon the customer’s whims and fancies.Best thing would be to check their Bikes on Sale section which would give you an idea of their style of work. All of their bikes are numbered like Monkee #1, Monkee #2 and so on. Currently they have 2 bikes on sale, Monkee #11, a Honda CB750 Four and Monkee #7, a HD Sportster with a Husqvarna tank. You can also check the bikes they are building for their Customers and among all the glorious designs, a CB750 ordered by one Mr. Henrik is worth a look. As mentioned it is not only on metal bikes that they create their magic, bikes with fairings also gets dressed up here for example Monkee #12, a Kawasaki Versys. The good part is that even if a bike is sold, you can request the same from them and they will happily build one for you, but of course it will not be an exact copy to maintain the authencity and so you can get it in a different paint scheme. If you have ordered a ‘custom’ bike, you can also follow up with them for spares and for a standard bike, they suggest you contact the local spares dealer. Logical, isn’t it? 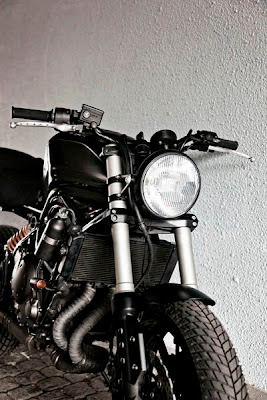 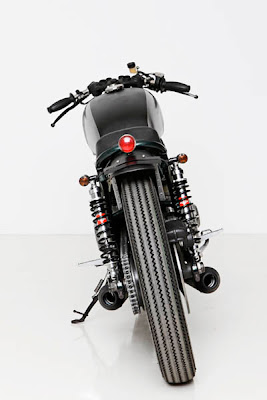 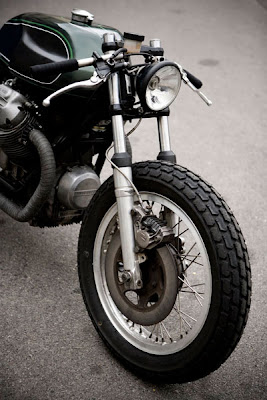 A Versys, Nice Rear! and a Guzzi
As for their reliability, there is no need for that question as they make the entire wirings (see, you gotta give Anders his due credit), any part they feel needs replacement on the original, they will do it. They usually provide new carburetors, axles, spindles, nuts, bolts, brackets, rims, hubs etc, meaning all the parts who are more prone to wear and tear are replaced with new parts, majorly original and only if it needs customization, they make it in house. This way the owner also feels happy that s/he won’t have to shoot off a mail to WM every time for the smaller things.If you look at their products, you will notice the WM pattern. The tyres stand out which are usually ‘balloon’ tyres. Overall the bike is very compact and kept minimalistic. They work on the tank and seat. Most of the bikes have rims to give a 80s feel, they work on the handlebars, the engine gets new carbs, the space behind the engine which holds the battery usually is reworked, a new taillight on a reworked rear end, black engine and lo… you have a beautiful one-of-the-world bike in your possession. 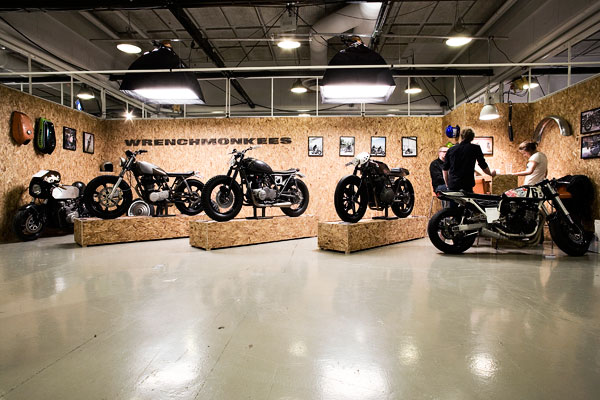 Actually they themselves say that “In the pursuit of clean mechanical aesthetics we seek to explore the basic expression of life on a motorbike. We do not necessarily focus on extreme performance, flashy colours or aerodynamics, but seek to build motorcycles with individual styling and a dynamic driving experience that relates to the style of each motorcycle.” The message is clear, from them you can expect a bike which is touched with the right amount of customizing that will make it stand apart from everything, yet relate to your individual styling. The bike will become a style statement but more than that it will personify you.Visit the website and the blog and don’t blame me or thank me if you stop all your work and start dreaming on your project to place an order for WM. I can only help you with their contact address. It is
WRENCHMONKEES, BERNHARD BANGS ALLE 27ADK -2000 FREDERIKSBERG COPENHAGEN, DENMARK PHONE: +45 40 105 305, or you can send an email to WM@WRENCHMONKEES.COM and if you plan to vist them personally, below is a picture that will greet you in Copenhagen. Does the picture above increase your motivation to visit them, well for me, it did and I am looking at the calendar to book a flight to Denmark. I am sure I can ask them for some lovely pastries as well.