There is God... and then there is Chris Pfeiffer 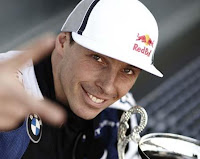 Incredible... Amazing... Just not words enough to describe the super talented, the one and only Mr. Chris Pfeiffer.