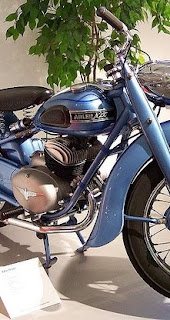 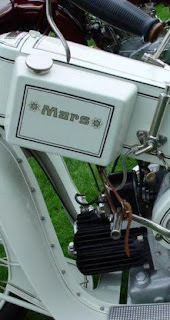 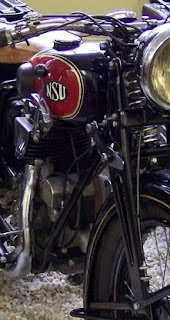 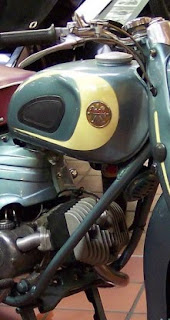 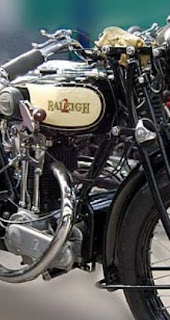 There are some really rare bikes in this world which are quite unknown to non hardcore motorcycle enthusiasts. Not that it has some exemplary engineering or set the world on its foot, but these bikes are so rare that they immediately become collector’s item once it is discovered in garages and other dingy places. Motorcycle came into existence during the late 19th century and the early 20th century was the kind of trial and error period with more errors to say. These errors have now become collector’s item. I am trying to start a series where these rare motorcycles can be featured with a brief history of its company. Of course most of them were from Britain or Germany as they were the pioneers of motorcycles during the first half of the 20th century and maybe you won’t believe it, but in Germany during the 20s to say 50s, there were around 500 production houses which were into motorcycling. 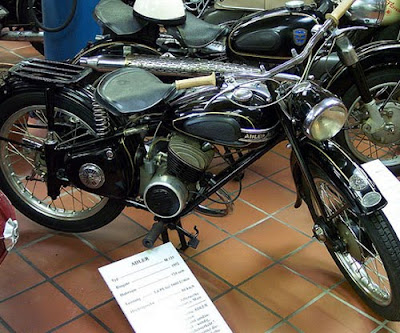 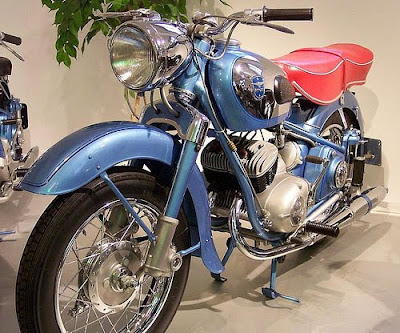 We all know about Adler as a car and motorcycle manufacturer, but they also were into bicycles and typewriters. The first half of the 20th century was dedicated to cars although Adler started out with motorcycles in 1902 which unluckily was very short lived. It was only after WW II, Adler refocused on motorcycles when 2 wheelers gained prominence as a cheap means of transport. Initially they started out with small 200cc engines. Their motorcycles were reputed to carry an excellent chassis and good suspensions which meant Adler bikes gave good riding comfort. The first 200cc engine was the M200 twin which was later refined and came out as the M250 Twin and it also became the best seller for Adler. It is said that brands like Yamaha and Ariel went into motorcycling after looking at the success bought by the M250. However after a decade and half, an electrical company by the name of Grundig bought Adler in 1958 and the motorcycle wing was shut down the same year. To its credit, Yamaha based their first twin cylinder motorcycle upon the Adler and also the company met reasonable success in endurance racing. 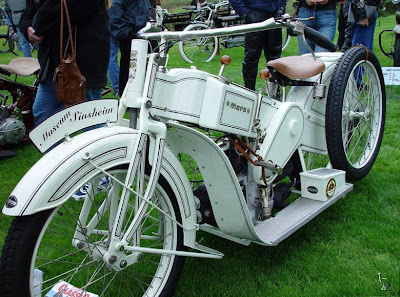 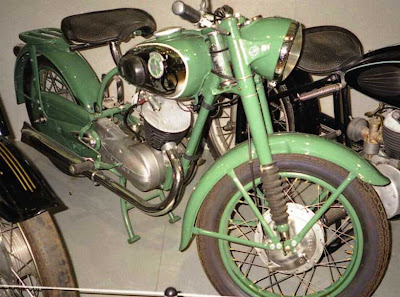 Maybe you do not remember the name, but I am definite you have seen this bike somewhere, in a forum or a website. And probably you have even heard about Mars Stella but couldn’t recognize one if you see it standing. Well, this is the Mars Stella 150cc two stroke single. If you have seen some of my recent posts related to Legend of The Motorcycle, look for the white motorcycle written MARS in the tank. In 1921, Mars built a behemoth of a bike, the White Mars which (at that time) had a 986cc twin engine (boxer) and a frame of pressed steel. The engine came from a Maybach boxer. As majestic as it is, this was not probably a practical bike anyway. 30 years later, a certain Mr. Rudi Albert designed this Mars Stella 150 which turned out to be a huge success. Mars had built the then futuristic White Mars in 1921 and it was ahuge and resounding success in Germany. The company used Fafnir and Zedel engines, while Fafnir was German, Zedel was Swiss and both companies sold their engines to many German companies during that time. With the World Wars and all, Germany had an unstable economy and Mars shut company in 1924. 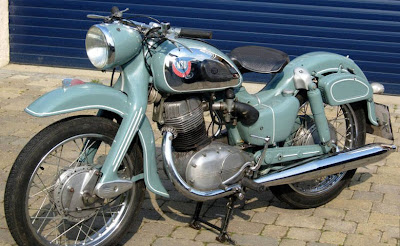 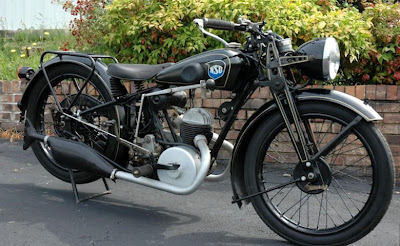 NSU (Neckarsulm Stickmachen Union) was a relatively more well known company and it was active for more time compared to companies which were around during its time. The company started their business in 1873 with manufacturing and repairing knitting machines. With the new century, they experimented with motorized bicycles getting engines from Zedel just like Mars did as mentioned in the previous paragraph. But they soon making their own engines and usually companies launch themselves and refine their machines to race level so that they could gather more global attention. NSU just didn’t bother making the first step and so not surprisingly their first production class was race bikes. It worked for them and also the fact that at the very first time it participated at the Isle of Mann in 1907, 2 years after their first model was out, it finished a creditable 5th. Then came the first World War, but NSU was just waiting for the war to be over, NSU were back by 1922 and within a decade, NSU was one of the largest motorcycle manufacturers in the world. Even the second WW was not enough to dampen their enthusiasm and in 1956, a streamlined 500cc NSU twin raced at an incredible 210 mph at the Bonneville Salt Flats. But by the late 60s, NSU wanted to get into the car business as the market was again getting up, their rotary engine car flopped and VW bought the company putting an end to once very formidable motorcycle company. 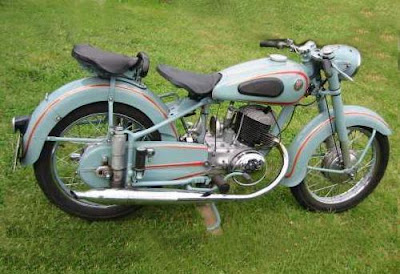 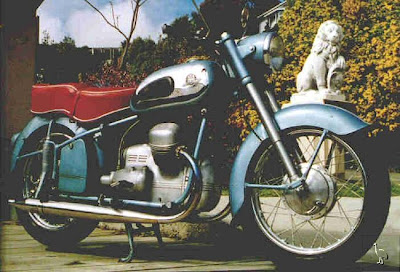 Like most motorcycle companies, Victoria also started out being a bicycle manufacturing company in 1886. Just before 20th century was to arrive, they produced their first prototype motorcycle in 1899. Then they took 5 years in the new century to make that prototype into production house and even when they did, it has those oft mentioned Fafnir and Zedel engines. Even after WWI, they continued to outsource their engines from Fafnir, Zedel and then contacted BMW for a 493cc horizontally opposed fore and aft twin cylinder engine. At those times, even BMW were making just engines and later when BMW began building their own motorcycles, Victoria recruited former BMW designer Martin Stolle to further develop the engine. Two of their successful models were Aero, a 250cc 2 stroke engine and Bergmeister, a 350cc 4 stroke engine and both models were reinvented time and again. The Aero came just after WW II and was in heavy demand in the 50s. The Bergmeister was announced in 1951 but was not released until 1953 along with a new Aero model. The 350cc had a 35 degree V-Twin engine with a four speed transmission and a powerful driveline. The Bergmeister was very successful but margin was less as production cost was very high. And BMW along with DKW were coming on strong. In the early 60s, due to financial strain, Victoria merged with DKW. 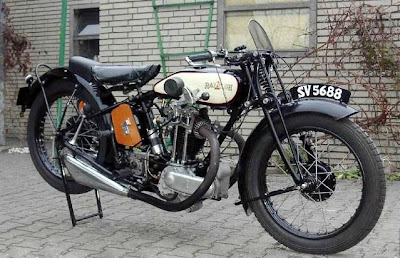 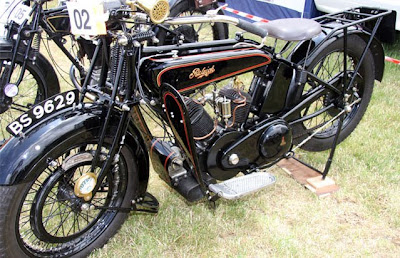 Now, if like me, you belong to Generation X, you might recall our grandfathers riding bicycles by the name of Rayleigh and they would vouch for it for their smoothness and what not. I thought it was defunct, but hey! It is very much active still making bicycles (UK website, US website). It was only a few years back that I got to know that the same Rayleigh company used to make motorcycles. Of course by the name you know, it had to be British. They made their first motorcycle in 1899 and in 1903, the Raleighette was born, a belt-driven three-wheel motorcycle with the driver in the back and a wicker seat for the passenger between the two front wheels. It was not much of a success. In 1930, it launched an atypical motorcycle, a motorcycle fitted with a cabin for cargo and a hood for the driver and followed it up with some more varieties which hardly resembled a motorcyle. There was even a saloon variant. But their real machines which made news were there luxury bikes that they developed post WW I. A 698cc flat twin, which was later replaced by a 798cc 60 degree V-Twin engine. Unluckily both had very short production life. Raleigh also produced models with sv engines of 174 to 498cc, and ohv engines of 348cc and 498cc. It was again in 1958 Rayleigh launched a moped with a 50cc engine made by BSA and they revolutionized the moped concept and as such the company is called ‘Father of Mopeds.
Source of info and photos - Good'ol Wikipedia, Cyber Motorcycle and stkone Flickr album . The Cyber Motorcycle website is truly one of the best sites to follow Vinatge and Classics. It literally has everything you can possibly dream of. I picked up a few images from stkone Flickr album. Man, you should see this album, it has captured almost all the vintage European bikes from various shows and events.