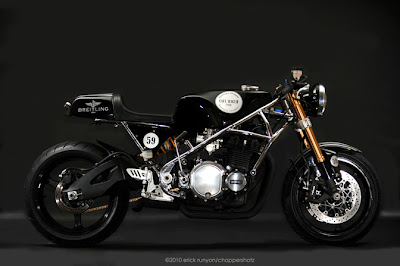 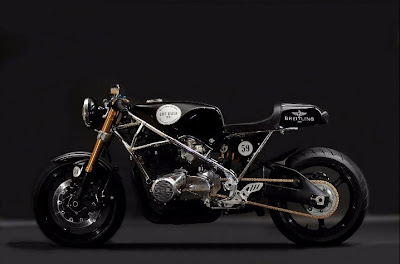 This is the Breitling Café Racer. I have occasionally come across the name of Santiago Chopper, a name more familiar amongst chopper lovers. I also knew that time and again Santiago Chopper has been associated with some brilliant custom bikes and more so with Trikes. What I didn’t knew was that Alan Bernard, the owner of Santiago Chopper was not just into choppers and trikes as evident from the images here. More is the accolade because the bike you see here is a true blue café racer and a great looking bike. From a man who has mostly spent his time on choppers and trikes, it is time well spent behind the café racer. And the reason behind building this bike is something you can only bow your head to… to Alan. All proceeds from the sale of this Cafe Racer will be going to the Curing Kids Cancer Funds, an organization which helps young kids with the dreaded cancer disease. 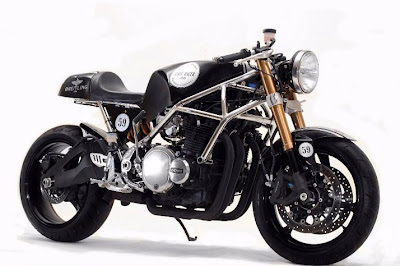 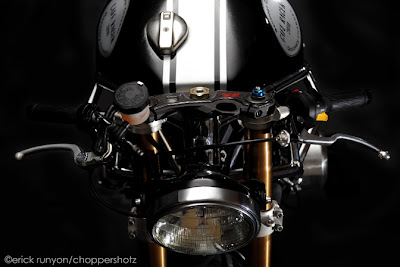 Now Alan Bernard was a client of a certain French born Georges Martin, a gentleman who was credited in revolutionizing the café Racer movement in 1970s as he specialized in café racers. From gas tanks to handlebars to rear fenders to the frame, George did it all. George had the uncanny ability of turning UJMs (like a 1976 Honda CB750 Four) to go faster than bullets. Inspired by George and of course Alan always had the street racing gene in his blood, he decided to build a café racer. So why the name Breitling? Since Breitling as we know is a swiss watch making company. Actually, Alan previously built a bike for its owner and he also wanted the café racer to be associated with something very precise, like a chronograph, and so thereby the name. 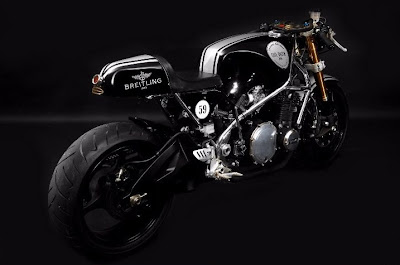 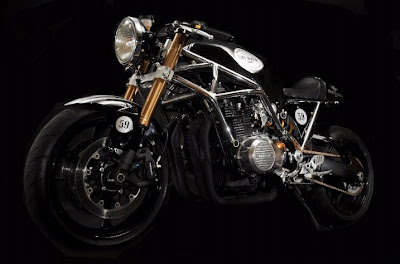 So what has gone inside the Breitling? The engine is borrowed from the maniac Kawasaki Z1000 and the frame, well what better than to have a frame built by George Martin himself! The swing arm, wheels and suspension are from a 2007 Suzuki GSX-R600. It also has a Benelli seat. You know George Martin stays in France and to get this bike done, Alan was absolutely sure he needed a Martin frame. To get to the man, he launched a man hunt in France and actually tracked down George Martin. Alan has been part of the Euro clan of 70s Café Racer, the Ton Up Club, Rockers, etc. In the U.S, which has basically a more chopper market, he set shop with the intention of gaining recognisation in a market that is prevalent, but now with age or shall we say, experience on his side, he wanted to build something for himself. 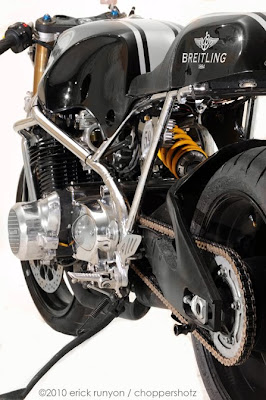 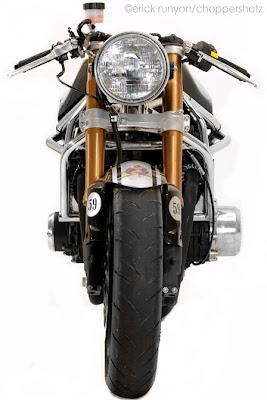 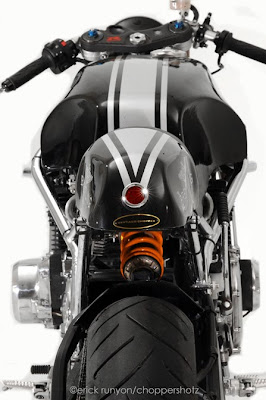 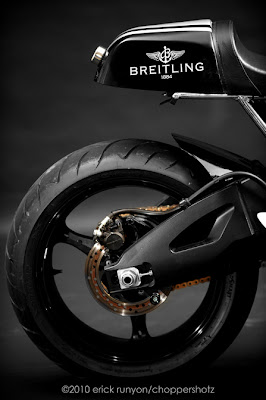 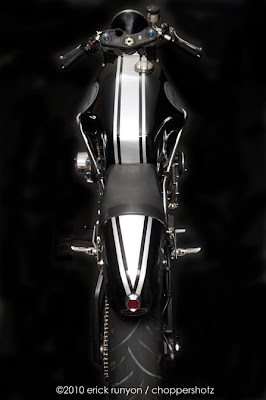 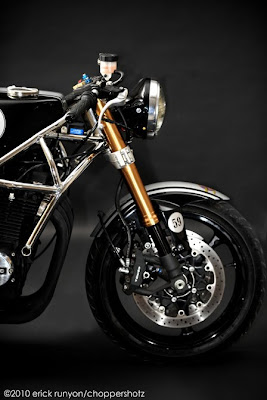 The trellis frame looks and compliments the overall package. The round headlamp is big and reminiscent of 70s styling. The golden forks up front readily enhances the look of the bike while the 4 in line pipes coming out of the air cooled engine in dark black subtely cries out that this is one bad mean machine. The white strip passes from the tank to the rear hump ending on the small tail lamp. It has a big swingarm on the rear monoshock, parts of the engine are done up in shining metal, the bike also features a kick start, very much a tribute to the 70s and the one off exhaust have been cut and shaped by Aztech Welding. Overall if you look at the bike, it has been kept very minimal and simple, yet it will demand repeated views from you. 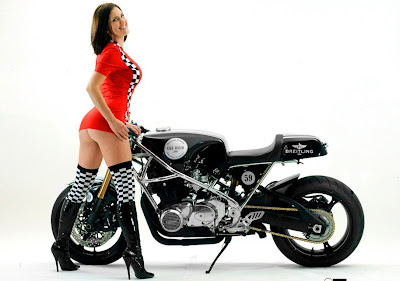 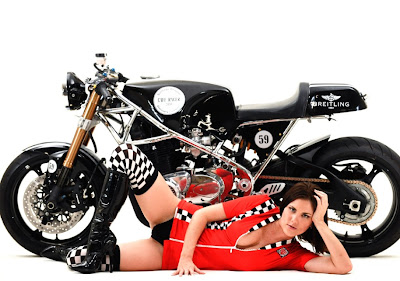 The Breitling is not the first Café Racer that he has built. Some time back, he has built the Café 1958, a very delicious looking Café Racer (photos at the bottom) and the Café 1958 was built for speed and handling with a frame and overall layout impersonating a GP road racer. I find the Café 1958 more appealing, like a true café racer, elongated tank, a humped seat to assist the rider to ‘tuck in’ and short handlebars for better control at high speeds while the Breitling is more chic, a more art version. The Café 1958 features a Panhead Outlaw 120” from Accurate Engineering, a 6-speed gearbox, 450 Honda Super Moto wheels, a Sportster front end, Suzuki GSXR hand and foot controls, a Triumph gas tank, Benelli 350 seat and shocks, etc. The Café 1958 won "The Best of Show" at The Tropical Willies Tattoo Shop in Biketoberfest 2008.

The Breitling bike is up for grabs and in case, you want to find it out exactly what it is before making a trip to Tampa where Santiago Chopper is located, you are in luck. All you need is a TV. Because from today (that is October 1st), a new series on the Discovery HD Theater Channel is starting which I believe will be of interest for you. It is a Cafe Racer Documentary Series produced by Mike Seate and if you were not a Café Racer lover, you wouldn’t have ended up in this page, so…
You can visit Santiago Chopper for more information and pictures. Here is the link to Breitling on the website.
All photos copyright held by Eric Runyon, taken from Choppers Hotz. Some images taken from Rocket Garage. Pictures of the Café 1958 are taken by Bob Clark.