MV AGUSTA F4 gets the Midas touch from AURUM 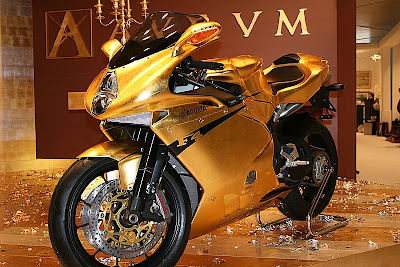 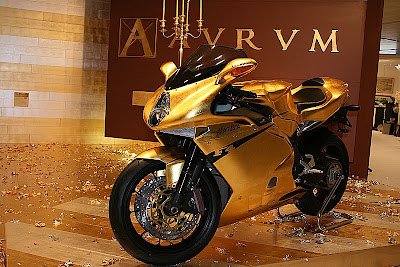 The gold leaves are of size 80 x 80 mm and are hand applied to give it a ‘gold flakes’ look and I think he has done it very well. The website quotes “The whole working schedule includes 9 passages of painting products and one gluing in order to assure strength like welding and an unlimited guarantee. The choice of the first motorcycle with these features was given to MV AGUSTA. We believe that MV AGUSTA, in its long history of motorcycle victories and it’s almost entirely handmade bikes, deserves to have the FIRST WORLDWIDE MOTORCYCLE IN 24 KT GOLDLEAF. AURUM is proud of its cooperation with MV AGUSTA.”
Aurum, the firm, has patented may of their works and record says that their patented collection include 11 patterns, 6 in gold, 4 in silver and 1 in copper . They have spread their Midas touch adding style and charm to the chicest houses, yachts, shops and prestigious hotels. Also see there are some scooters where they have done there thing which might interest you if you are not so much into bikes. It will be interesting to find out which lucky human being (although read somewhere that some bloke from Brooklyn has already bought it) is going to own this thing. Price of the bike is undisclosed (again, although read somewhere it is at $120,000 USD) but rest assured, I guess we will need to take some more births to accumulate that kind of money to buy the ‘Golden’ F4 and of course, also have the logic, as why to buy it in the first place. Nonetheless, if you are interested, do visit the Aurum website.
Additional pictures below courtesy: Kaufman Motos.