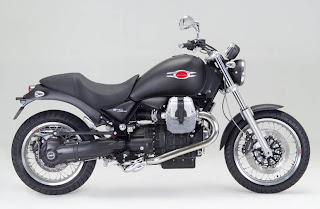 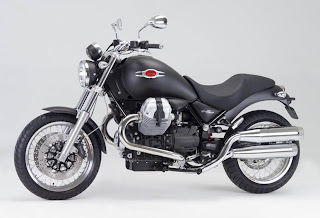 Its the new 2008 models from MOTO GUZZI. Its blatant Guzzi and its so Italian and its absolutely stunning.
With the 940 Custom, Moto Guzzi has created a new market segment. It has the classy look with all the modern amneties and one look at the machine tells you that its gonna be a performance machine. They have taken a more sports oriented line that perfectly conveys a message of individuality and freedom with elegance and class. A shorter wheelbase and redistribution of weight over the rear axle makes the bike less bulky from the side and creates a classy but aggressive look. The twin chromed exhaust pipes adds to the aggressive appearance.
Other details like spoked wheels, chrome decorations on the tank and the retro styled instrumentation all convey a sense of elegance and beauty that go so well with the otherwise muscular design. 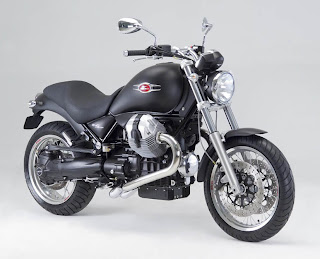 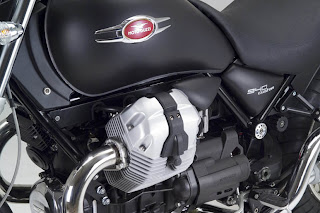 The 940 CUSTOM blend feature looks with an elegance that recalls Moto Guzzi traditions of a rich heritage of dating back to 1921. It is this unmistakeable identity and personality that differentiates Moto Guzzis from all other motorcycles.
With its low sitting and lengthened frame, its resembles a “street road” of the Yankee culture, but with an unmistakably Italian character, naked engine, low engine... Moto Guzzi... that somehow rhymes with the Le Mans, so can we say that the 940 Custom is in fact a Cafe Racer? Yes, why not, after all, it is one !
The generous dimensioning of the posterior tire, and above all, aggressive the twofold noise suppressor of overlapping exhausts makes it a Retro Cafe Racer.
The 940 CUSTOM is available from May 2007 with one line of specific accessories in a position to answering to the requirements and the dreams of the more demanding motorcyclists. 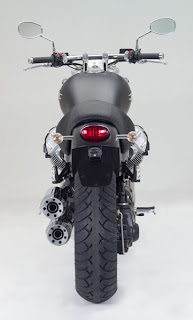 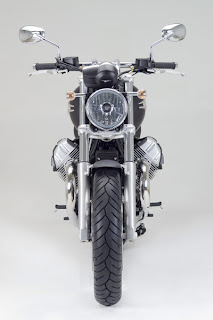 Text, Info and photo source, and for more info, click on the logo -

Among the other new 2008 models is the Norge, that marked the return of Moto Guzzi to its rightful place as leader in the “Gran Turismo” sector. For 2007, the Norge 1200 cc flagship will be flanked by an 850 cc version. Among the “Gran Turismo” models, the Moto Guzzi range will feature the California Vintage as an elegant cruiser with a legendary past. However it is the “naked” that has won Moto Guzzi so much public acclaim and success. The “naked” range consists of three families, touring (Breva), fashion (Griso) and sport (1200 Sport) with their 750 to 1200 cc engines. These bikes are now fitted with the Moto Guzzi’s revolutionary reactive shaft drive system. Both are available with ABS and are fitted with new electric switches as well as new saddle covering not to mention the suave new mother-of-pearl colour scheme.
Apart from the aggressive racing exhaust, other special carbon-fibre components are available as after-sales options. The latest appearance is the 1200 Sport, the elegant sports model designed for riders wanting a motorbike to suit all occasions. The 1200 boasts generous performance that can be boosted by a racing kit or the bike can be converted to a sports tourer with 36 litre pannier bags. As for the racing sector and its proud traditions, there is still a lot in store for enthusiasts. The star in absolute is the MGS-01 Corsa. This machine brought victory to Moto Guzzi in both the “Battle of twins” in Daytona and the “Supertwins” championship. It has not been technically altered and is manufactured on request as should any machine made for those that collect dreams.
Source and more info on 2008 models, click HERE