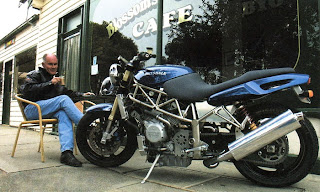 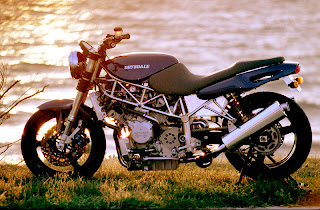 Australian bike-visionary Ian Drysdale's has a fancy for big (REAL BIG) multicylinder motorcycles. Among my favoirates. is the BRUISER, DOHC, 32-valve, 90 Degree, V-eight powerplant. The Drysdale 1000-V8 Naked bike is a hand built exotic machine that utilizes critical parts from existing motorcycles for ease of service.
Its a naked-roadster prototype set to form the basis of the most exclusive, muscular and potentially performance packed customer cruiser for sale anywhere in the world priced at more than $70,000, A motorcycle junkie from way back, Drysdale has designed and built plenty of unique and innovative machines over the years (a two-wheel-steer, two-wheel-drive enduro called the Dryvtech 2x2x2, car dynamometers for Ford of Australia, a wind tunnel at Melbourne's Monash University, etc.). But it was his 750cc V-eight sportbike project, begun in 1994, that really brought Drysdale to the forefront of motorcycle design. "I wanted to build a street-legal racer," the Melbourne-based design engineer says, This is the highest-performance motorcycle that could be ridden to the store for a loaf of bread!" 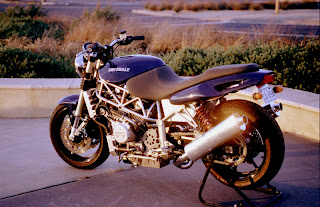 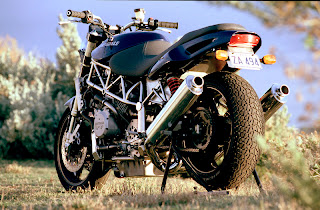 With cruisers and naked roadsters dominating sales charts around the world, it was almost inevitable the Drysdale V-eight would end up powering such a bike. "We'll build two distinct models," Drysdale continues. "One is the Bruiser, with an 8-into-2 exhaust, six-speed tranny, cast wheels, flat bar, semirearset pegs and more aggressive styling-a bike aimed at out Monstering the V-twin Ducati, but with a V-eight. The other model is the Cruiser, which will feature wire wheels, eight separate silencers, a five-speed gearbox, forward-mounted footpegs and pull-back handlebar. " 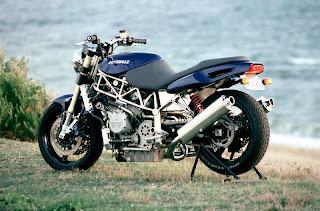 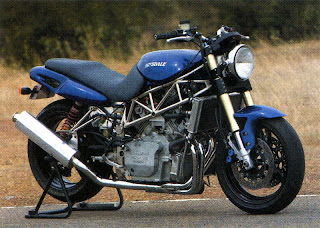 The Bruiser prototype uses a twinshock low-rider version of the V-eight superbike's tubular-steel frame with more conservative geometry (26 degree of rake and a longer, 1,430 mm wheelbase), though fork angle can be adjusted via eccentric inserts. The frame is built from mild steel (less prone to stress fractures than chromemoly, Drysdale says), with Ducati-style triangulation on the side spars and a Kawasaki ZX- 11 alloy swingarm. The engine is a semistressed member. A Yamaha YZF-RI fork assembly, along with RI wheels and brakes, which were used on the prototype, but in typical Drysdale fashion customers can choose their own components, though Drysdale will encourage early customers to opt for Ohlins or WP inverted-fork assemblies and Brembo brakes to accompany the multi adjustable Penske twin shocks used on the prototype. 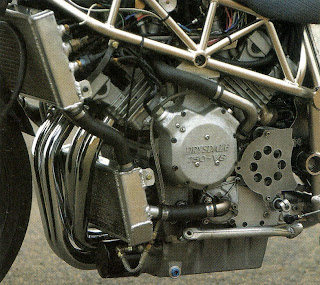 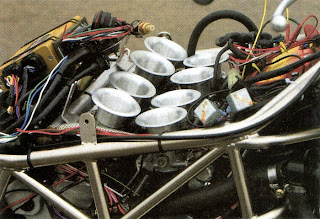 The Drysdale engine uses as many Yamaha parts as possible to allow customers to source spares easily-a policy reflecting the enthusiastic support Yamaha Australia has given the project from the start. The 750cc V-eight motor in the prototype uses two FZR40OR 16-valve cylinder heads mounted on a horizontally split crankcase specially designed by Drysdale for maximum rigidity. Cylinders are positioned 90 degrees apart for perfect primary balance. Yamaha parts retained on the 749cc engine include conrods and pistons (eight of each), 32 tiny valves (21mm inlets/19mm exhausts), all four cams, YZF750-spec six-speed gearbox ratios (albeit in a removable, cassette-style gearbox assembly) and a wet clutch. Major changes for the Bruiserspec V-eight include boring and stroking to 1 000cc (62.Omm x 41.4 mm) via an all-new cylinder block, a long-stroke crankshaft fitted with Drysdale's own conrods, and YZF600 pistons and cylinder heads, which have engine mounts cast into them. Drysdale says the bigger engine will redline at 14,000 rpm rather than the 750's current 16,000 rpm, and will produce 140 rear-wheel horsepower at 13,500 rpm. (The 750cc engine makes 120 hp at 14,200 rpm according to Drysdale.)