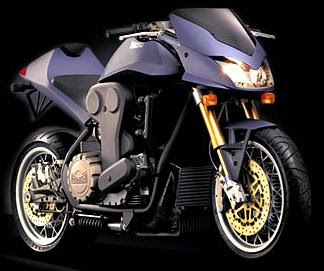 How big, fast or strong does a bike have to be to have that title?
What about a Turbo charged, 2000cc, 354 kg beast churning out a mammoth 295 Nm of torque with a bone crunching 260 HP whose top speed is restricted at 250kmph to keep the driver alive?

Take a look at some of the features -
*The beast is aided by an Electronic Fuel Injected Turbo Charged DOHC 16 valve engine.
*Of course, you might miss the main stand if you are the Governator or else all you could probably do is strech the side stand and appreciate the monster's beauty etched only in Aluminium alloy (engine), Magnesium alloy (oil sump), & Carbon fibre (Fairings and Tank).
*It has a Digital Control System with adjustable Footrests & Hand lever
*All engine data can be checked and adjusted over the Internet via diagnostic plug and a special adapter
*It also features a electronic immobilizer for those who might not have enough space in the garage to park it. 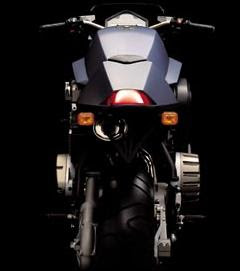 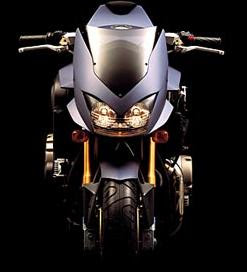 A Brief History -
The great Friedl Munch started creating the Munch Mammoth monsterbike in the late 60s with different versions ranging from a 996cc streetbike to a 104bhp, 1278cc roadster fitted with an inline four-cylinder NSU engine which would reach speeds of around 200kmph/ 125mph.
Friedl Munch passion was to build racing motorcycles which could outrun almost anything on wheels. Post WW II, Munch worked in the Horex race shop, building 250 and 350 singles and dohc GP twins. In the 1960s, Munch developed his own, supremely effective, racing drum brake, which was fitted to many top privateer bikes like the legendary Manx Norton or G80 Matchless. In 1964 Munch created his first full motorcycle - a tidy, dohc 498cc four. In 1965 he was commissioned to build a machine for record-breaker Jean Murit, one which would be bigger, faster and more powerful than any production roadster, and so the first Mammut was born. Some 500 similar Mammoths would be produced over the following 20 years, all of them hand-built. 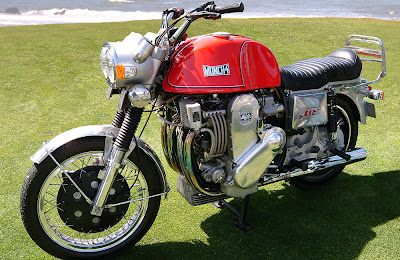 After some hiccups, again in 1968, British-made Rickman frames were used by the new Münch-URS team, whose first race was at the (non-Championship) Austrian Grand Prix on April 1970. It was a dream debut- Munch rider Kaczor won the race and set the fastest lap, with another Munch coming second, although it must be said that the opposition was not a strong as it would have been at World Championship level. Nevertheless, Hoppe's Münch-URS managed an impressive fourth place at the German Grand Prix at Hockenheim a week later.
Sadly, after this promising start the project fell apart. Disagreement among the top brass again led to the stoppage of the family run. There were a few more outings for the Münch-URS solo, but what should have been a credible challenge to the dominance of MV remains one of Grand Prix racing's more fascinating 'neverwozzas'. 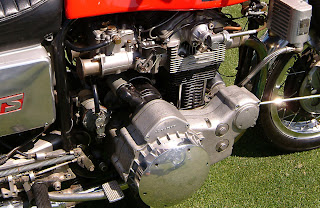 Meanwhile, Munch's monster machines had been attempting to take the world one-hour speed record from Mike Hailwood and his MV Agusta. Munch built the Daytona Bomb, a 125bhp, 1370cc beast which was capable of travelling at over 175mph. To win the record, however, it needed to maintain those speeds for 60 minutes and instead the Bomb shredded its tyres in three laps of the Speed Bowl. Like the Grand Prix racers, it was another Munch motorcycle which didn't quite hit the spot.
Even today, auction rates by Bonhams at Stafford are estimated to sell for anything from $260,000 / £130,000 and above.
Above text credited to Real Classic
You can leave a message at diesel@aol.in