If Looks Could Kill - The VOXAN Black Magic 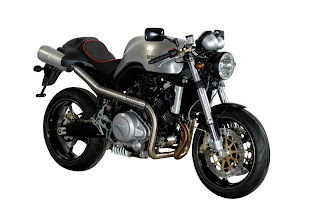 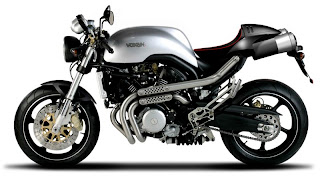 You would have been dead by now.... I meant if looks could kill, then the VOXAN Black Magic would have had its own trail session court for the countless deaths it couldhave caused.
Voxan is French a.k.a Style with a capital S just like everything French is. It had its share of running into bankrupties and all, but Voxan is back and with the Black Magic surely is showing its rejuvenated passion for Cafe Racers, for which they were very renowned when they started the company in 1995. Its factory is in Issoire, France.
Started by Jacques Gardette with the aid of Alain Chevallier, who designed the chassis part and Sodemo, who designed the engine, the first prototype roled out in 1997. It was the Roadster, followed by the Café Racer models in 2000 and the Scrambler model in 2001. Now they have the Charade and and the Super Naked XV and lots of other exiting line up which I hope to cover in the following blogs. 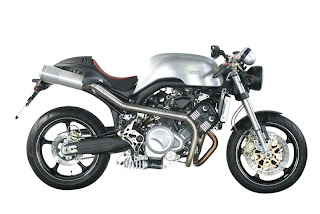 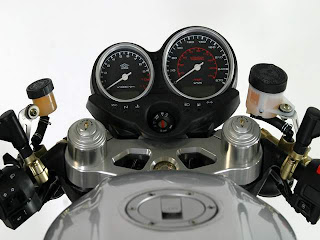 Their bikes are of course not mass built, but targeted to the passionate audience as Voxan exemplifies their passion of motorcycling. Running into trouble with financial losses in later part of 2001, Didier Cazeaux and Société de Développement et de Participation bought Voxan in June 2002 to ensure that the passion doesn't die and in April 2003, the manufacturer started producing its motorcycles again. The Street Scrambler model was released in 2003, the Nouveau Scrambler and Black Magic models in 2004, the Charade in 2006 and are all set to launch the Super Naked XV in 2008. All Voxan motorcycles use the same engine, a V-Twin with a 72° angle and 996cc of displacement.
The Black Magic with its clear defining lines, a tight chassis charecterizes the sophistication a biker may desire in a sports motorcycle. Of course, the price tag of around $20,000 means it will always be exclusive. 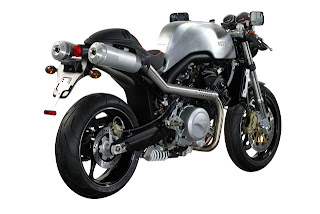 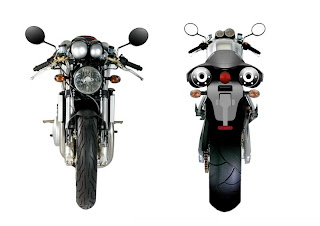 The retro looking engine boasts of a 100 bhp V2 mean machine and is meant for business and not just looking good. Although weighing at 210 kilograms, the fully adjustable Paioli-Fahrwerk upside-down fork and horizontal shock absorber provides the rider always a safe feeling. helped with the beautifully crafted footrests which are also adjustable. Its torque figures of 102 Nm will ensure that your ride is smooth throughout with a smooth power development as well which can make it a good tourer bike although the positioning might be difficult for long tours. Even the mileage is very good returning a impressive figure of 16 kmpl. The rpm is limited at 8000 and with such a high torque, there is ample of powerband between 6500 to 8000 rpm.
In sporting terms, the solo-seat saddle at 810 mm, with the dome at the back and the exposed naked chain makes it a real stunner. The low handlebar also adds to negotiating the wind pressure and you will have all the whistles blowing at the top speed of 225 km/h. With a new performing inverted fork, it is docile yet accurate regardless of the type of curve you are racing in and the braking provided by Brembo makes sure you stop where you want to. 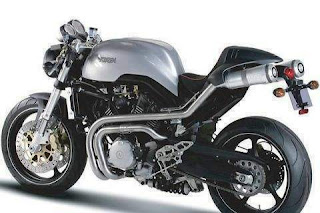 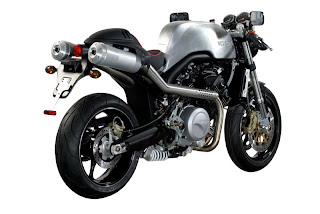 There seems to be a big advantage of being a small manufacturer, as one has a limited production unit and thereby failure is not a big financial loss, one can tend to be innovative, while at the same time surprise and even shock with their products. And now New-Age Retro being the 'Mantra' of present bikers, Voxan went ahead with cafe racers in typical 70s styling, with the handlebars bracelets a-la Norton style, a singular saddle with a typical Cafe Racer tank and a single round headlight with twin chromed pods. The wheelbase is slightly elongated than the previous Cafe Racer and Roadster models and also the angle a bit more open. This is a 60s bike with a new millenium technology. Its an invitation to the pleasure of riding of yesyteryears drapped in stainless steel and aluminum that is fun, easy, efficient, accurate and lively, the bike is a toy that will pilot with ease and enjoyment.. This is evidenced by the apparent welds on the tank or decks footrest cut in the estate by a goldsmith. Come to think about it, Voxan has given a sports bike which seems to be created by a sculpture. 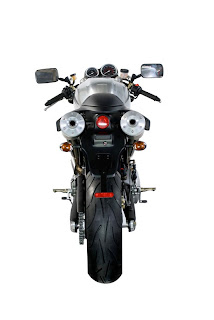