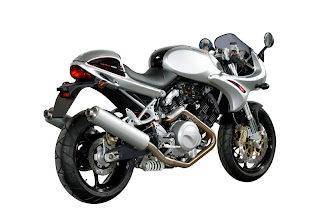 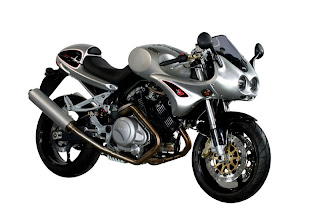 The 2004 Cafe Racer
Continuing on the Voxan post, the focus this time is on the VOXAN Cafe Racer.
Although looks wise, some might disagree that that a Cafe Racer needs to be minimalistic in the accessories while the VOXAN CR with the sculpted tank and fender and upswept seating doesn't really compliment a cafe racer, crossing your leg over the seat and getting into the low-handle bars will definitely reassure you that it is indeed a Cafe Racer. And when sports bike of the 70s have evolved into futuristic looking machines, then why not the cafe racer, after all its the spirit of the cafe and the spirit... is alive and kickin' in the VOXAN Cafe Racer. 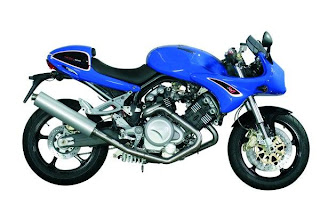 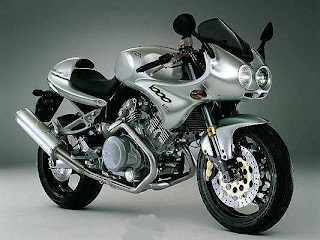 The 2004 Cafe Racer & 1998 Cafe Racer
Voxan had introduced the model previously in 1998 and in 2004 has followed it up with the second version.
Between nostalgia and modernity, the Voxan 1000 Café Racer is an alternative to the Japanese and English bikes. The driving position is such that while it essentially meant for city racing, long tours will also be acceptable. In town, the Café-Racer will benefit from a narrow turning radius but the good positning offers a good long ride also. The 108 bhp @ 9000 rpm has enough grunt to pick up the horses from spot on with a torque figure of 10.3 kgm @ 6500 rpm. 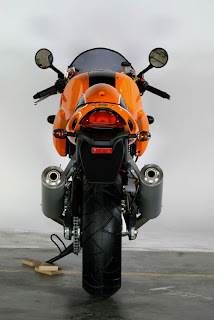 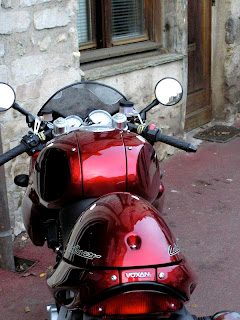 The 2004 Cafe Racer & 1998 Cafe Racer
The twin has a very good powerband all through the rpm starting below 2,500 rpm, the sudden thrust is very sports bike like which is consistent through the entire rpm arc and also has the electronic injection Magneti Marelli. The architecture of 72 ° V makes it almost immune from vibration and with the aid of the liquid cooled engine, what you get is a modern machine.
The frame is completly hidden with the big round beams over the tank. The chassis structure is completed with it's reversed fork of Paioli stems (41 mm) and a shock absorber mounted under the engine. Both elements are fully adjustable. 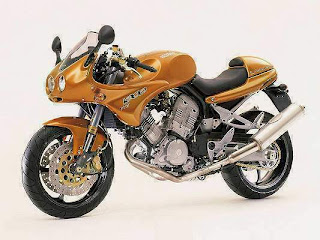 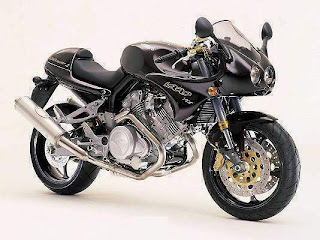 The 1998 Cafe Racer
The characteristics of the bike is such that there is considerable weight on the wrists, although not unbearable, but the mat on the dome gives a quite comfortable seat.
Whether the Cafe Racer will find many favours is not debatable as it is made for a niche market, but the cost pegging at $ 16, 800 will surely make it a desirable. While many critics have mentioned the bike styling as outlandish, the same critics did also mention that individually the bike is stunning to look at. Taking a look at the net will give you a fair ammount of idea that it has already taken quite a few fans and these fans surely know what a modern Cafe Racer should be... 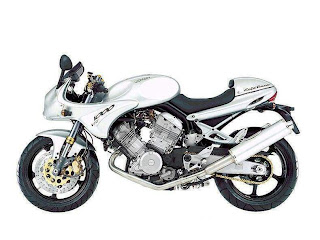