The Cafe Racer from HD - The SUPERMANX 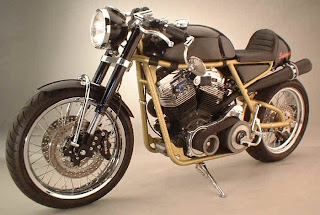 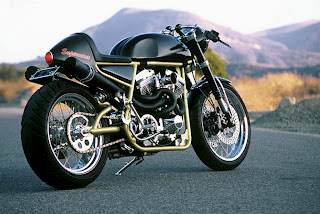 Who's the man here? Mike.... Mike Cook. Well, his project didn't actually projected as it should have, but none the less, his creation finds favour in every cafe racer's fan book. Imagine a Harley, aahhh!!! Imagine a Cafe Racer, aahhh!!! Now imagine the fusion! What! Yes, you read it right! But how? How? Ask Mike Cook.
What you see in this post are the pictures of the $39900 SUPERMANX, a Cafe Racer with a Harley heart.
And what a heart, the Supermanx used the massive 1850cc double camshaft engine hardly able to contain within the chassis designed for a Cafe Racer and if this project would have survived, it would have been America's first Cafe Racer to be 'Made in America'. But again, not by an American. The world is shifting. Nortons and Vincents are now having their production facilities in the U.S, where as the man who gave the Supermanx is actually British. So, the heritage of cafe Racers are very well etched. 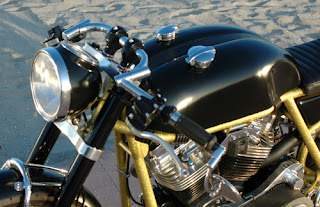 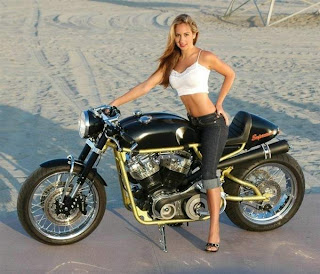 American Cafe Racers is the creation of Mike Cook, who CV includes working with the likes of Dan Gurney’s All American Racers, Cosworth Racing in the U.K. and Jesse James’ West Coast Choppers and has been involved in IMSA racing, CART racing and others. He probably got inspired by the Norton Customs of Colorado and started his own Supermanx project and formed American Cafe Racers in Colorado Springs, Colorado.
The Supermanx as the name suggests, is inspired by the old Norton Manx but it was never going to be a easy job to fir the huge 1850cc V-Twin engine in a Manx frame and so the entire suspensionand frame needed reworking. 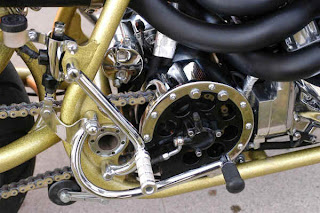 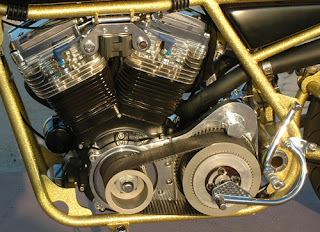 Nicknamed 'The Left Coast Limey' because of his British heritage, Mike Cook is busy working his way to the top of the custom motorcycle industry. Like the bike he has created, Mike is a combination Anglo-American. Born in England in 1963 Mike enjoyed an upbringing in a country with a rich history of motorcycling and motorsports. His father constructed his own racing cars and the family spent many weekends on trips to all the race circuits around the country. Mike started building and modifying Karts and Motorcycles at an early age and quickly developed a reputation among his peers as the top “wrench” in the area, even though he wasn't old enough to get his license. By 15 he was the mechanic for the British National Karting Champion. In 1980 the Cooks moved to Kansas City in the United States. Mike adapted to his new life by building the potent Yamaha TZ750 engines for a local racer and continued building and modifying his own bikes. The home garage housed a constantly changing lineup of machines needing his attention but Mike seemed to have a particular interest in the bikes he remembered seeing in England. He continued his work in the local speed shops and honed his skills building engines, welding,designing and making custom parts. He restored several vintage racing cars for area enthusiasts and supported them at race meetings around the country. 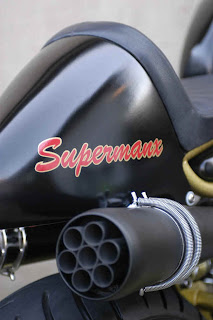 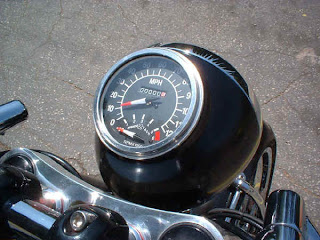