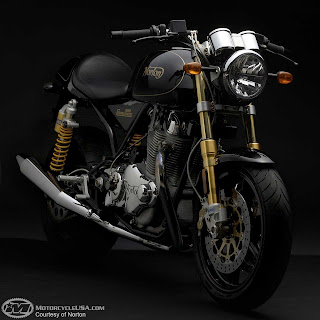 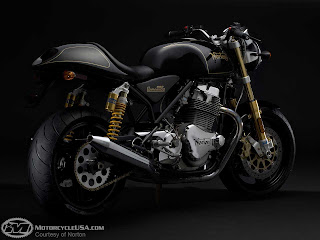 The 2007 961 SS Model
NORTON COMMANDO....
Just the name turn heads of bikers all across the world with the mind enquiring 'Where? Where?'. Well, thats the spell of the NORTON COMMANDO that even after so many years, even after the whole world has seen the various incarnations in hundreds of different models and even after Commando lovers rode it for decades, a single Commando in attendance will turns more heads than all the other bikes combined.
A pure british bike company like Triumph, but it was not able to withstand the Japanese attack through the 70s & 80s which made a falling for many European bike companies, the Commando started in production from 1967 although the roots stretch to the mid -40s. By the later 70s, Norton almost stopped production and till 2005, there was no new production bike although some racing bikes were produced sparingly in between like the RC588 in 1989. 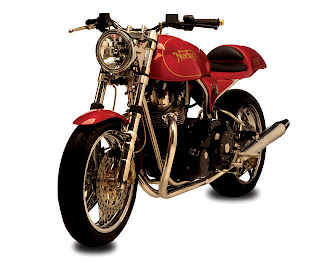 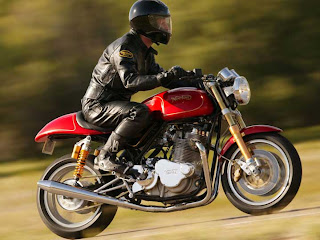 The 2005 Prototype model
In a way, the twin cylinder design evolved from the Bert Hoopwood designed Norton Model 7 Twin giving birth later to the 650cc Norton Dominator and 750cc Norton Atlas before being launched as the 750cc Commando in 1967. And again there was Norton Manx and then... there were too many successful bikes from Norton to even start mentioning would be futile as the purpose of this post is to gratify our visual senses by looking at the stunning now and then Commando pictures.
The classic styling of a naked road bike with air cooled in-line twin cylinders has and still is a bencemark for many performance bike sections.
The revival of the Norton motorcycle began with the stunning 2005 model Commando prototype and when Norton announced they are going to launch a new model in 2007, many critics worldwide thought that the 05 prototype model just cant be improvized, out came the Commando 961 SS (Signature Series) in 2007 which left everyone gasping with the sheer brilliance artistry that would put even the Italian designers to shame. 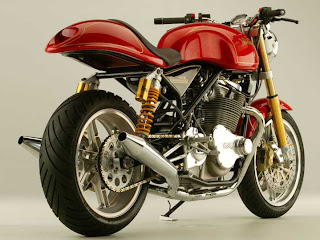 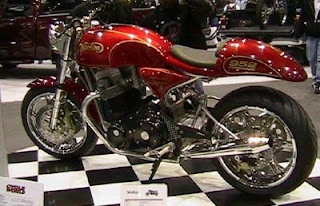 The 961/SS Commando represents a new beginning for Norton Motorcycles. Designed and built from the ground up, this bike continues the Norton legacy of defined style and performance. This modern roadster reflects the soul of the original machine. Classic sculptural forms are combined with raw functionalism, laying beautiful shapes over a structural frame and muscular motor; resulting in a visual language that is both sensual and purposeful. With a very narrow waist and curves in just the right places, the 961/SS is a bike that feels as good as it looks.
Mr. James Landsdowne Norton was the founder of the company and way back in 1904, the first Norton motorcycle was rolled out although it attained its peak of success in the late 60s and 70s with numerous racing titles. Prior to that, Norton manufactured bikes mainly for the British Troops and more so during the 2 World Wars.
The Commando model made its debut in 1967 and by 1977, it made the same fate as other European bike manufacturers, unable to withstand the Japanese invasion. Various revival attempts failed in the intervening years, but now the latest revival, which is American-based seems to have again found its fans in the modern world. 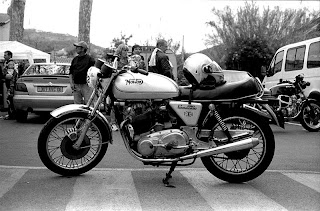 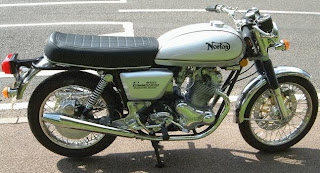 Mr. Kenny Dreer, owner of Vintage Rebuilds was responsible for its revival just as he has started reviving a lot of European bikes since 1995. Based in Portland, Oregon, Mr. Dreer started by restoring the Nortons and later into "remanufacturing". He renamed the company into Norton Motorsports Inc. with a worldwide trademark. The new Commando has three versions: the base Commando 961 ($10,995), the sportier Commando 961S ($13,195), and the deluxe Commando Signature Series dubbed the 961SS ($19,995). "The Norton Commando is such an outstanding motorcycle that it deserves the best technology currently available," says Mr. Dreer. "It's an entirely new bike, but at the same time, it's a classic Norton. That was the approach I took with my restorations and the direction I'll continue to take with each new Norton we make."
It took 2 years from the prototype in 2005 to the production model of 2007. Mr. Dreer gained prominence with the development of the handcrafted Norton Commando VR 880 in the late 1990s. When his hand-built Norton Commando VR880 was featured in Cycle World in 1999, he responded by producing 50 of the updated classics. Then, in 2002, Norton America begins development of the all-new Norton 952 Commando. 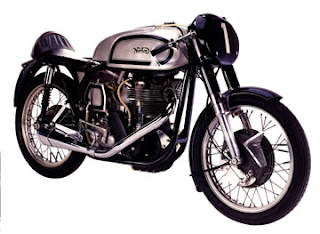 To compare it with the older model, the most obvious change is the motor. The crankcase is now horizontally split and the powerplant is now of unit construction compared to the older version which like all British bikes had a separate gearbox. Although the parallel twin remains similar, the internals are all new, viz. crank, cylinder heads, etc. Ofcourse the older Commando was having 836cc displacement compared to 952cc in its present incarnation. Fed by a pair of 39mm Keihin carburetors, this new with 88mm x 79mm of the 961cc engine produces 80 rear-wheel horsepower at 6500 rpm and 65 lb-ft of torque at 5200 rpm. Carrying the traits of the legend are the frame of welded chro-moly steel tubing and an aluminum swingarm. The chassis geometry is also identical, with each bike sporting a 24.5-degree rake, 4.0 inches of trail, and a 56.5-inch wheelbase. The fuel tank is 4.5 gallons and the seat height is at 32 inches. The base model 961 comes equipped with a 43mm non-adjustable fork and preload-adjustable twin rear shocks for suspension while braking duties are carried out up front by twin 320mm rotors with two-piston calipersand in the back by a single 240mm rotor works also with a two-piston caliper. The 17-inch wheels are spoked steel retaining the legend's aura and it adds charecter to the bike's image, with 120/70ZR-17 and 180/55ZR-17 Michelin Pilot Road tires.The sportier 961S features an upgraded suspension and higher performance brakes. Its 43mm fork and rear shocks are three-way adjustable and its brakes are supplied by Brembo. The front have a pair of

320mm rotors gripped with four-piston calipers while the rear brake consists of a 240mm rotor and a twin-piston caliper. Instead of spoked steel wheels, the 961S adopts cast aluminum in the same sizes. Michelin Pilot Powers replace the Michelin Pilot Roads. These upgrades, and the adoption of a solo seat, manage to shave 15 lbs off of the 961's claimed 430-lb dry weight. The Commando Signature Series (961SS) takes the 961S's upgrades one step further. You will have the BST carbon fiber wheels that are as light as they are expensive, so are the fully adjustable Ohlins suspension. Rest of the components are in tune with the Sports series.
For more photos and information, check out the bike at Norton Motorcycles
All photos original source - The NORTON Website