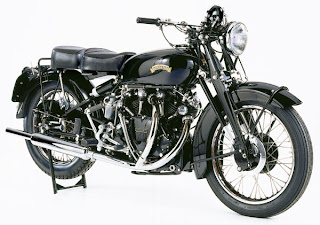 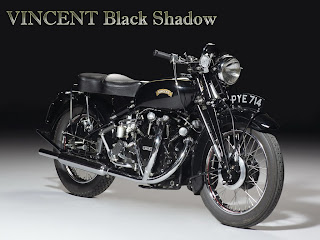 Among the 4 wheelers, there will always be debates to counter the Ferrari as the best car in the world with Lambourghini, Honda to Toyota, BMW to Merc, Bentley to Rolls Royce or even amony models, say the Ford Mustang GT to the Chevy Camaro, but when it comes to 2 wheelers, among the MV Augustas and Ducatis and Hondas and Yamahas and Triumps and Harleys and past laurel holders like BSAs and Ariels, there is only one bike which is hallowed, which never had any competition, which every bike lover would whole heartedly would agree... that it is surely the GOD of motorcycles... well, you know it, its the VINCENT from the HRD motorcycle company. 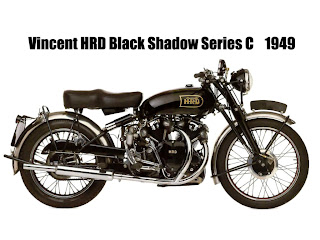 I guess we all know its history, geography and whatever it has to offer, so lets not do to much of reading and learning, but just enjoy the visual gratification it provides.
I am starting a small series on this legend where I will try to cover the most major history related discussions.
If you want to know more about this bike, there are a zillion pages dedicated to it on the web, so let me not waste more free internet space, but if you want to search it in google, click here for an easier way.
HRD Motorcycle Company setup in 1924 by Howard Raymond Davies, a British RAF flying-officer by profession and a visionary by passion. To know more about the man, visit his page on wikipedia The Great Howard R Davies (Wikipedia)
Howard Davies partnered E. J. Massey to form HRD and knitted the engine duting duty in the Brough Superior, that is the famous J.A. Prestwitch (JAP) Company's 1000cc v-twin engines.
In 1925, (Yes! as early as 1925), an HRD set an average speed record (NOT Top speed) of 105 kmph at the Isle Of Man TT.
So how did the name VINCENT came to be associated with HRD?
HRD filed for bankrupty and was bought by OK Supreme which was again bought by Mr. Phil Vincent, another British dreamer like Mr. HRD, for 500 Sterling Pounds. He began building reconstructed HRD's, renaming his new creations as the 'Vincent'. He designed the first ever "Monoshock" for a 2 wheeler, the Cantilever Rear Suapension and got it patented in 1928. He named the company VINCENT HRD. 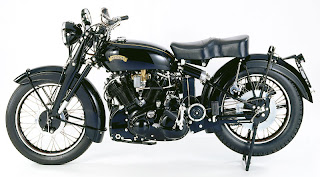 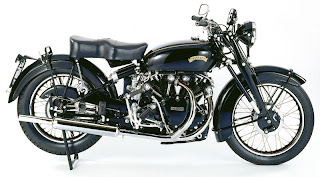 Later as the exports were mainly to America, to remove the confusion with HD (Harley Davidson), he removed the HRD initials and renamed it only VINCENT in 1949. For a detailed info on the history, click on this link - VINCENT Motorcycles (Wikipedia)
In 1931,Phil Irving joined the company as the chief engineer, and his first design project was the OHV 500 cc single-cylinder "Comet" and "Meteor" engines. Phil Irving was the man who made the world's first V-Twin engine in 1936, which legends say was 'accidental'.
In 1948, HRD introduced 2 new models, the "Black Shadow" and "Black Lightning", motorcycles which changed the 2 wheelers scenario for ever and now have got such a cult status that even if you would pay the world, the owner would not even blink before saying 'No'. Their status shoot north like a rocket when one Mr. Rollie Free rode a Black Lightning at the Bonneville salt flats, named the "John Edgar Lightning" for its ts sponsor John Edgar, to a record-breaking land speed record top speed of 150.313 mph (240.5 kmph). Well, everyone has seen the picture. 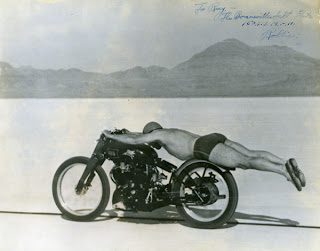 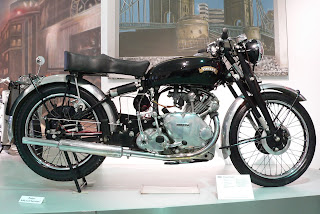 Then came the Series A Rapide in 1936 and a whole lot of things were introduced into the motorcycling world again. The world saw the first ever foot gearchange instead of hand-operated gearlever, a four-speed gearbox instead of three, a side stand and rear view mirrors.
The Series B Rapide came in 1946, designed during the war and as expected again several innovative ideas came out from the 2 Phils which are used in the modern technology. The gearbox became a part of the engine casting (Unit Construction). The use of the engine as a stressed member of the frame, which consisted of an oil-tank spine with the engine hanging below. The brakes were dual single -leading shoe in both front and rear. Then there was the hydraulic shock absorber and spring assembly which replaced the old twin springs and friction damper. The rear seat was had spring coils with 6 inches (150 mm) of suspension
Of course the most famous bike from the Vincent stables was the BLACK SHADOW
(Wikipedia)
The Black Lightning was a racing version of the Black Shadow made in aluminium alloy to reduce the overall weight and it had a single racing seat and rear-set footrests. It was introduced in 1948. The Black Lightning was advertised as The World's Fastest Standard Motorcycle - This is a fact, not a slogan! - a claim it held till 1972 when Kawasaki launched the 900 cc Z1. Only around 30 Vincent Black Lightnings were built ever and thier prices now will leave a big hole in the pockets of even those who can afford it. 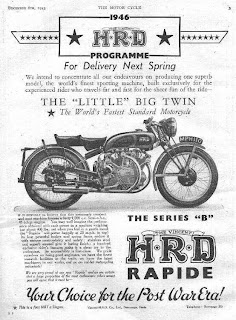 To know more about HRD motorcycles, ofcourse google is always there and here is a direct link to wikipedia. The series will follow when Vincent was again revived by the classy Egli Vincent in the next post.