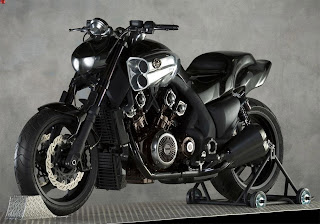 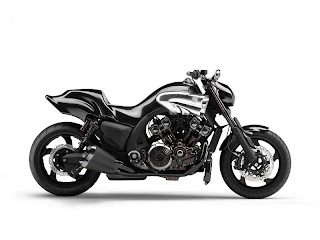 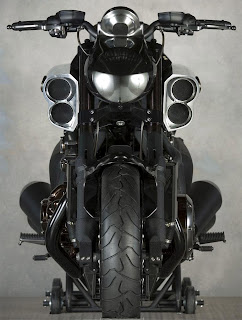 This is the prototype non-working model of the new 2009 YAMAHA V-Max. YAMAHA always believes in listening to the public. When the V-Max was originally launched in 1985, bikers just lapped it up as it was a really 'different' bike, kind of custom made with a kind of new category, the Power-Cruiser with so much power that it eventually took the world by storm. It is one of the highest selling modeld from the 4 Japanese manufacturers. Now YAMAHA is up at it again. They have added MORE Power!
With over 250 kilograms, many a sports bike were kicking dust in the face of this monster, but not anymore! It is said to belt out nearly 200bhp. Imagine! Even the R1 and Busa would be giving away road to the V-Max, not that it didn't earlier! This is going to be the most powerful production model ever on God's green earth. 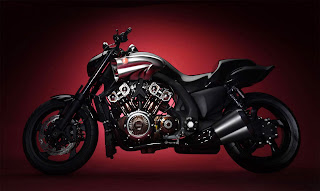 Talking about green, the reason for the delay in launch is to do something with the 'Green' issue. Final specs are not out as yet, but this massive behomoth of the 2 litre engine was showcased in Birmingham last year and then again subsequently in Paris and Milan, which means YAMAHA is definitely ready for launch once they sort out this issue.
The current liquid cooled shaft driven model of 1200cc and 102 bhp selling under the Star Motorcycles banner cost $11, 200. But now with such a steep rise in power and cubic capacity, the Vmax will be a very expensive flagship model produced in limited numbers. And that is the aim too.
Check the website NEXT VMAX for a 360 degree view although I couldn't find any info on any text.