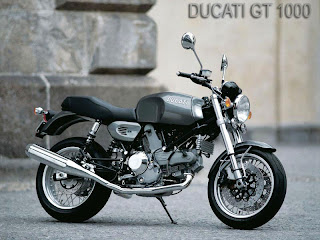 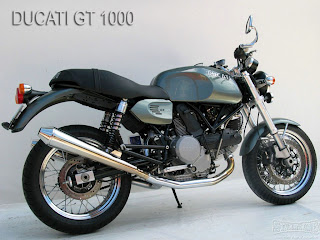 These are the DUCATI Sport Classics, the GT 1000, the Sport 1000 biposto and the Sport 1000 S. A close look will give away that these are based on the very hugely successful 1970's GT 750. And why not? Retro is back and who else can design it more beautifully than DUCATI? All the 3 models are a piece of art. I have long back posted a 'post' on the Ducati Sport 1000 Limited Edition Ducati. This is the Gran Turismo (GT) tradition. The new age GTs are more compact than the 750 and looks smaller too. Although the tank, side cover, mud guards resemble the 750, this is pure contemporary styling. Even the twin exhausts and the seat mimics the 750 except the end part. See the comparision photos below courtesy Web Bike World. All the 3 models share many physical and mechanical components with minor differences like the Sport 1000S has a more stiffer frame than the GT 1000. The GT1000 also features chromed steel rims in place of the sportier aluminum hoops as on the other bikes. But major factors like weight distribution is same on the models enjoying a healthy 52:48 ratio. Surprisingly, the engine has been carry forwarded from the GT 750 - sohc, dual-spark two-valve per cylinder! The engine is air-cooled with a top whack of 92 horsepower at 8000 rpm with 67 foot-pounds of peak torque at 6000 rpm. But these bikes features wet clutch in place of the former dry unit. Nothing requires to be said about the engine performance as it is a Ducati - responsive, light, precise and progressive. 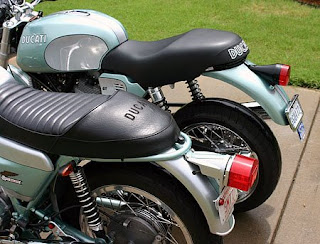 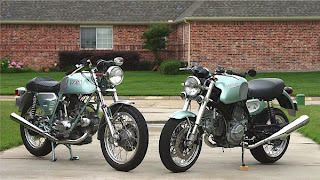 This series carry forward its parental traits of being a sport bike with touring features in a balanced package. It was a bike meant for everyday riding just as the new series are. But the new beasts get an increase in the cubic capacities to deliver modern day performance. Powering the GT is the 1000 DS engine, the most advanced, most powerful Ducati air-cooled engine ever. The Ducati Sport Classic family has the typical 70's look with exposed chassis and engines, complimented with elegant rounded shapes. The curves are there to enhance the overall look, nut in a minimal way not giving away the retro look. The best thing about the new age retros are all these bikes, whether its a Ducati, Triumph or Honda, they have subtlely incorporated the latest technology and engineering and create a thoroughly modern motorcycle that lives up to today's standards of road-going performance. As I said, dont get fooled by the new GT as just a beautiful piece of machinary. The frame was based on the GT 750 which was designed by the acclaimed racing chassis designer Mr. Colin Seely and based on the Ducati 500GP. The frame uses the stout twins engine cases as a "stressed member," (a la Royal Enfield). Even the suspensions are large at 38mm diameter forks by Marzocchi. The engine is of course the famed 90 degree V-Twin or better known as L-Twin and combined with stainless steel mudguards and spokes is just pure bliss to look at.The first Ducati GT 750 was designed by Engineer Taglioni and produced from 1971 to 1974, and the engine size was increased in 1975 with the introduction of the GT 860. A series of technical and stylistic developments were made for the GTS 860 version, which was one of the key models on the international motorcycle scene from 1976 to 1980. The Ducati GT1000 is the perfect evolution of the species which was first showcased in the Tokyo Motor Show in October 2003. 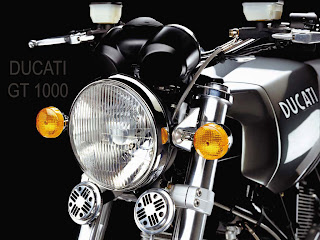 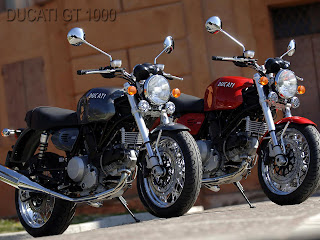 GT 1000
The slim fuel tank, knee recesses, trim side covers all are reminiscent and interpretations of the classic lines of the original GT's of the 70's. Many of the details like the top crowns, fork caps and handlebar mounts are finished in polished aluminum, and are complimented with the chrome surfaces of the wheels, instrument trim, handlebars and horn covers. The chrome full-length exhaust pipes and mufflers on each side complete the classic look.The handlebars enables an upright riding position which id further supported by a well-padded dual seat sewn in a classic pattern and features 'Ducati' printed in white on the back. As mentioned, the exposed advanced Desmo 1000 Dual Spark engine is powerful and torquey and is further aided by Fuel Injection. The frame and swingarm are finished in gloss black paint. They are similar to the Sport 1000, except for the addition of mounting points for the twin shocks and the two side panels. The new GT 1000 has traditional chrome steel tubular handlebars, which use a classic bend and rise to produce a comfortable riding position that is ideal for every day and touring use. The 36 chromed spokes are made of dehydrogenated steel and have a diameter of 4.4 mm. 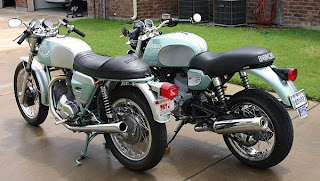 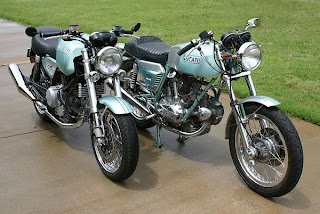 The front brake system of the GT 1000 consists of two Brembo floating callipers with 30 and 32 mm diameter pistons which are thermally insulated. The discs are semi-floating with a diameter of 320 mm and a thickness of 4 mm. The callipers on the GT 1000 are mounted on two hubs so that the pad on the opposite side of the pistons can be compressed against the disc. The rear brake system consists of a floating single piston Brembo 34 mm calliper with high friction sintered pads and a 245 mm disc. A mentionable and special feature of this bike is the exhaust pipes. The pipes are double-walled manifold. This is composed of two tubes, one inside the other, which creates a layer of air, thus providing lower temperatures of the outer tube and also ensures the lustre of the chrome finish, despite the considerably high temperatures of a modern-day exhaust system. Any fiuther doubts about emission should be put to rest as the GT 1000 responsibly complies with EURO 3 anti-pollution standards by way of a lambda probe inside the compensation tube of the exhaust manifolds and two trivalent catalysers housed in the two silencers. The multi-function display of the GT 1000 features a black faced analogue read-out speedometer and rev-counter. Electronic features of the GT 1000 include a trip-fuel function allowing remaining possible mileage to be checked whenever the fuel reserve light is on. If you want to buy one of the GT 1000, go for the new two-tone livery of metallic black and cream, which recalls the original designs of this Ducati GT but you can also settle for the traditional red and grey colour which are also absolutely stunning! 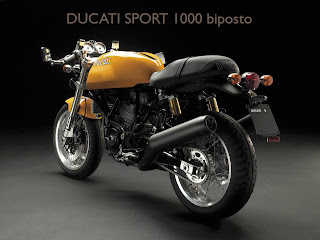 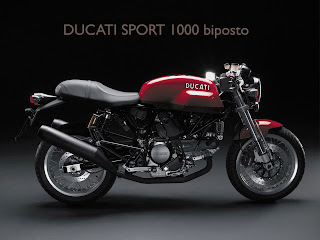 SPORT 1000 biposto
Well, this is the Café Racer version, my favorite. The Sport 1000 biposto is a two-seater which features raised clip-ons to make the riding position even more comfortable and retro style twin rear shocks. The removable passenger seat-cover, colour-matched with the bike, keeps the Sport 1000 biposto true Café Racer looks intact, but take it off and you'll find a comfortable pillion seat underneath. The two-seater version of the Sport 1000 embodies the same high quality and advanced technology as in the GT 1000. The physical differences lies in the products colour variance. The colours available for this model are: Burnt yellow with black stripe, Gloss black with white stripe and Ducati Red with white stripe, all three with a black frame. 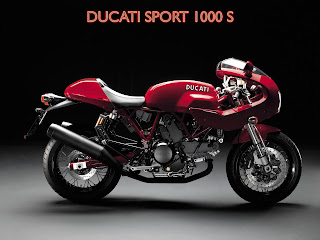 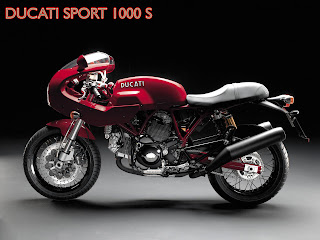