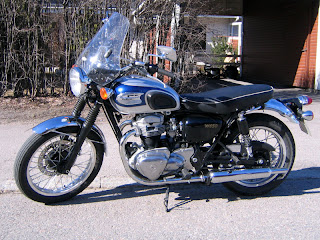 Come On, you can't call it a New-Age Retro, it just doesn't fit. So its the oppsite of it, Old-Age Modern! How about that? Kawasaki W650 Kawasaki's retro vertical twin recreates the British bikes of the 1960s, but without the grind of pain. There are many suckers like me who gets misty by the look of a British classic twin. Thats one thing, but riding it is altogether another experience. If you can the beast rise from his sleep with the dreaded kick starter, the next thing to worry is your back. The suspensions or the lack of it is something I never got used to. In one word, its stiff. But still a British classic gets us bikers misty and all. Now imagine all those good looks with the luxuries of a modern motorcycle! thats where the W650 comes in! As mentioned in the last post, it was a decendent of the W2TT which was itself a copy of the British heritage.
Well, as everyone says and is probably true, thatit mimicks the Bonne or the T120R, but the fact is that it has beaten the Bonnie in its own game. It outperforms.
The subtle differences from the Triumph lies in the slightly longer wheelbase giving it more stability and straight line control which is also aided by its extra 20 kg dry weight. 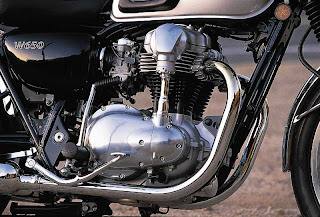 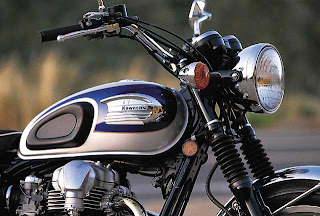 The vertical engine has a driveshaft for the cam (see pic) but it still manages to look retro. Kawasaki has done an impressive job of packaging modern technology in a classic manner. The shapes of the tank with those knee pads, the typical styling of the twin cylinders, the twin pods, the spoked wheels and right down to the fenders and mud guards, its just a replica of the 60s styling.
But then the unseen differences are exactly what it makes to the new-age retros. To start with, each cylinder has four valves reducing the engine's mechanical presence, the driveshaft coming in place of the pushrod, minor but important changes for ease of the user like the electric starter and the single front disc brake, all adds up to glorify the W650 on its own standing. It has a 360-degree crankshaft design so that the alternating power strokes comes by movement of the pistons up and down together giving the W's engine smoothness which the classics missed out but then retaining the mesmerising exhaust note. To add to this, there is the counterbalancer which snuffs out the vertical twin's considerable vibration. Other modern incorporates are the benifits of wet-sump lubrication, a digital capacitor-discharge ignition system with a throttle sensor and a clean-air system that reduces exhaust emissions, the 34mm CV carbs on the W650 share a common large airbox, which improves power and reduces intake noise. 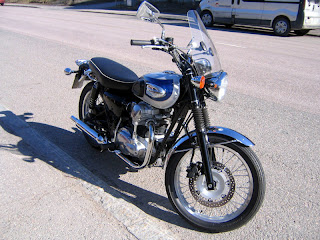 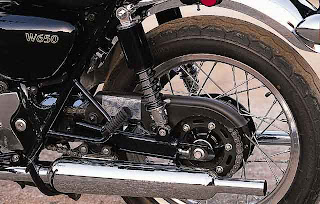 So of course with these changes the W650 also makes great power. effortlessly pulling from below 1500 rpm with a lot of rev in store. The rpm can be extended all the way to the 7700-rpm redline with out any hiccups. The clutch and the five-speed gearbox will never let you complain. The nostalgia flows with the rubber gaiters on the fork legs, the piping on the flat seat which also aids you to shift backward or forward for adjustment, the riding style is very conventional with the torso upright so that you will never get fatigue. The frame is a familiar double-cradle pattern with a beefy square backbone concealed under the tank. The chrome headlight might get you fooled, but its actually plastic. The tyres are specially prepared by Bridgestone for the W650 with a rib-style pattern up front. The exhaust system follows more from its parental lineage of the W2TT than the Bonne. 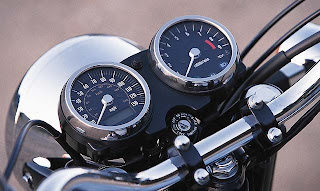 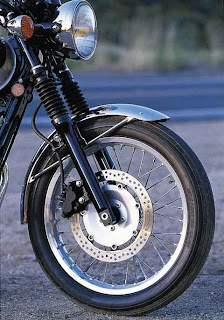 In all, this is a bike that recreates the magic of the 60s with a better experience, nostalgia without the hassles of actually having to put up with the antics of the classics. Its a deadringer for a Triumph, but only better. And thats not a bad thing. You see you can relive the past with the modern luxiries added. Its like you are watching a classic Clint Eastwood Western or a classic Maradona in action in High Density Imax experience. Best of both the worlds!
SPECIFICATIONS
Suggested base price: $6499
Engine type: 676cc, Air-cooled, SOHC, 8-valve vertical twin
Bore x Stroke: 72 x 83mm
Transmission & Final drive: 5 speeds, wet clutch & Chain
Front & Rear tire: 100/90x19 & 130/80x18 Bridgestone
Front & Rear suspension: 39mm stanchions, 5.1 in. & Dual dampers, 4.1 in travel, adjustable
Seat height & Wheelbase: 31.5 in. & 57.1 in.
Fuel capacity & Mileage: 4.0 gal. & 43.4 mpg avg
Wet weight: 473 lb.
For a complete riding impression, read this article on Motorcycle.com and a 2005 official UK Kawasaki website about the details of the bike.
In 2006, Kawasaki added a short-stroke W400 model by combining the same 72 mm bore with a short-throw crankshaft to give a 49 mm stroke and 399 cc displacement.