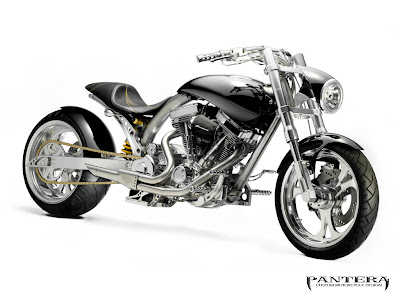 "You see us comin... And you all together run for cover...Were takin over this town"
That was a part of the song 'Cowboys from Hell' from the premier thrash metal band, Pantera. Now its not Dimebag Darell or Vinnie Paul working their magic on these bikes you see here, but what you see here surely makes your adrenaline rush just as Dime's riff still does.
Located in Torrance California and not generally open to the public is the design studio of PANTERA Custom Motorcycle Design. 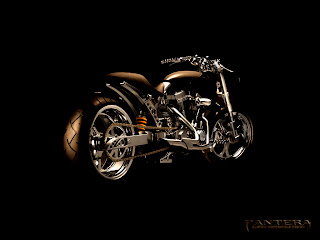 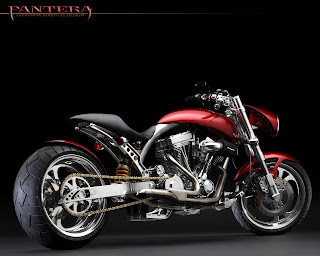 Officially formed in 2004 after 3 years of friendship and working together, PCMD's first made it to the cover of Robb Report Motorcycling Magazine in 2004 with their initial prototype. Now with that king of a design, ofcourse the response was expected to be overwhelming and it was.
PCMD has basically 2 designs working out. The Dragster, which is their basic model and the specail upmarket SP1. The Dragster concept was created by Hector Valdes, the company’s Concept Designer and Managing Partner and completed on CAD by Charles More, the company’s Technical Supervisor. By the start of 2007, their concept became a prototype. This is the new breed of American V-twin cruiser! This is not a bike, its a PANTERA! 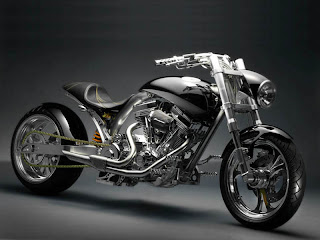 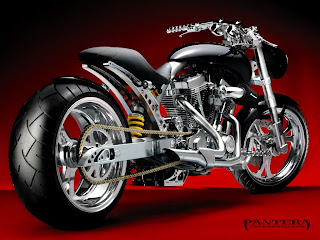 And as the name suggests and one look at that fat rear tire will tell you that is a Drag machine. Every part of the bike is unique in the sense that NOTHING is procured over the desk. Every biy is made in house. The parts made in aluminium, titanium and carbon composite material are entirely specific to the Pantera Dragster. This mammoth 2032 cc V-Twin beast weighs just 250 kg (dry), thanks to the carbon and other alloys. The inverted forks of 55 mm are from Storz / Ceriani while the fully adjustable monoshock is from Ohlïns. The 18 inch front tyre is a 130-60 Metzeler ME880 while the massive 18 inches rear is a 240-40 Metzeler ME88. 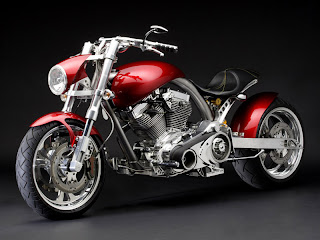 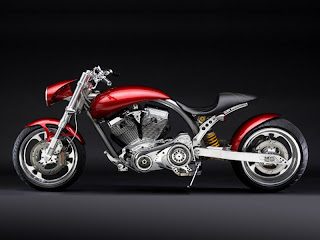 The website puts in "As the Dragster name implies, the bike was designed with a long wheel-base and a radical combination of drag bike and sport cruiser dynamics. It is unique in its styling, extremely rideable and easy to service. As an absolute; it does not have anything that isn’t contributing to the highest performance standards possible for a street-legal machine. There’s also no guesswork involved in its fabrication. All of the machines frame pieces are CNC milled to exacting tolerances… All of us on the Pantera team have logged plenty of seat time on our prototype and none of us were left anything short of amazed. We’re sure that you will be too. " There is no arguing over that and amazed we sure are!
The Dragster design has Cradle-less tubular frame with an internal oil circulating system within its backbone, a one piece billet aluminum swingarm with fully adjustable monoshock. 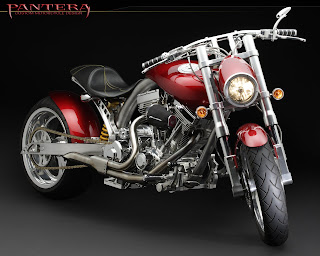 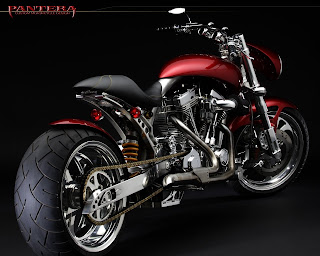 The frame is of Carbon Steel with Stainless/Titanium finish powercoat. The cradle for the battery, License plate mount, forward control arms & base and the swingarm are made of Aluminum. The 4 gallon tank, swept Headlight are a composite of Carbon Fiber & Aluminum while the fenders are of Carbon Fiber composite. The Exhaust pipes are of course made of stainless Steel. You can choose to finish of the bike tank, fenders & headlightin in your favoirate colour with the given options of Midnight Black, Candyapple Red, Candy Blue, Charcoal Grey or Bronze but it has to be a single colour, no dual tones.

The engine is (as mentioned) a 2032 cc V-Twin with 6 gears with a chain final drive. the only OEM parts are the forks, the monoshock and the handlebar controls, forward controls & mirrors
It has a digital tacho & speedometer. Weighing at 250 kg, it has a long wheelbase of 72 inches, the rake angle is 26 degrees, the seat height is 27 inches with a ground clearance of 6 inches.
The Dragster (base model) is retailed at $ 44,500 and the 2006 SP-1 (Package includes 280MEZ rear and 3D Contour Wheels) is retailed at $ 48,750 (ahem!). Sure its a steep price, but look at the finish, will ya? Not to mention the engine and bicycle parts.
Upgrade options include custom paint tank, fenders & headlight. Passenger package includes Rear Peg Kit and Back seat passenger back support attachment.
So what are you thinking, if you have the moolah, this is the bike for you. Its all-show-all-go! If you

notice the logo, that is also similar to the band Pantera in terms of styling with the P and A in the end stressed out. I dont know if the name is a tribute to the band Pantera as both have a lot in common and mainly the Attitude, but Dimebag Darrell sure would have been impressed. And who wouldn't be? Visit the PANTERA Motorcycles website for information and loads of photos.