One Large Single Please!... Its Velocette 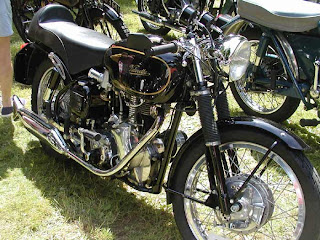 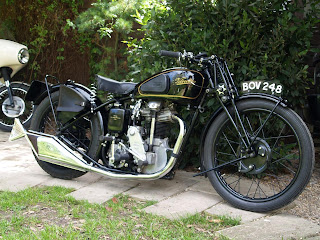 In 1961 a basically standard Velocette Venom roadster became the first and only 500cc motorcycle to average over 100 mph for 24 hours. Till date, no bike manufacturer including the fabulous four Japanese manufacturers has ever repeated the feat. That was not the only feat with which the now production-extinct Velocette etched its name in motorcycling history. Velocette machines were a pioneer in engineering known for innovation. Among its many patented designs are some common place on motorcycles today which include the positive-stop foot shift and swingarm rear fork with hydraulic dampers. Well, there are more. But lets start off with some history. 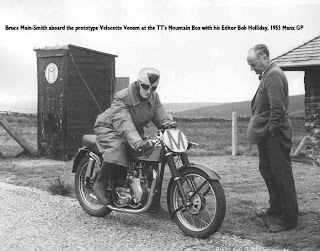 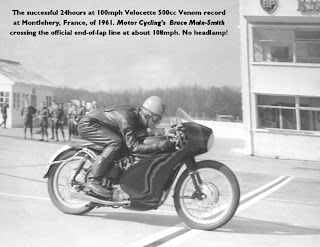 Velocette is the name given to motorcycles that were made by Veloce Ltd, in Hall Green, Birmingham, England. Yes, Birmingham again! They actually never competed woth the likes of BSA, Norton or Triumph. What Veloce specialized in was hand built motorcycles, renowned for its quality.
Veloce Limited was founded by Mr. John Taylor and William Gue as 'Taylor Gue Ltd' in 1905. Its first motorcycle was named Veloce. In 1905 itself, 'Taylor Gue Limited' became known as 'Veloce Limited' and started (like all others) manufacturing cycles and related products. The Veloce was a four-stroke motorcycles and only later in 1913, did the company built their first two-stroke. The bike was named Velocette and the name remained for all further production motorcycles till factory closed in the 60s. They started by producing high quality 2 strokers of 250cc and above, which were naturally expensive, but the gave the name quite a reputation. All their machines were single cylinders. They strongly believed that their single large bore cylinder machines can overpower the twins and it did twice in the Isle of TT races. In 1926, Alan Bennett rode a 350cc Velocette to victory in that year's TT by an astonishing ten minutes. Some of the amazing stuff these motorcycles had (and more so looking at that time produced) were things such as throttle-controlled oil pump!, something no other manufacturer even knew what that was! 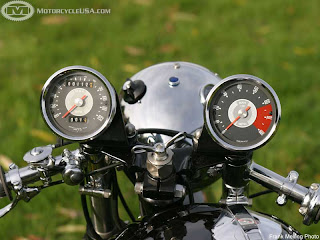 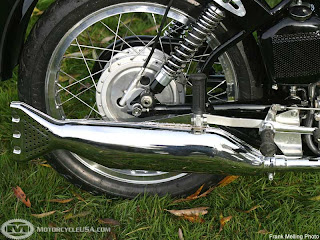 One of their most famous models was the GTP, which came out in 1930 and was produced until 1946. The GTP was an elegant, reliable lightweight motorcycle with charming steering and reasonable power delivery. In mid 20s, after starting off with the 'A' series and growing into the 'H' series with regular updates, they produced a complete new machine with an overhead camshaft (OHC) 350 cc engine, which became known as the 'K' series. This machine was a huge success in racing and had a long list of trophies to show off that included the Isle of Man TT and Brooklands races. This led them to produce roadster models developed from this initial model K, named as KSS (super sports), KTS (touring sports), KTP (twin exhaust ports), and KN (normal). The OHC engine K series continued production until 1948 with rigid frames and Dowty air-sprung telescopic forks. (Hear this now!) Valve timing was accomplished with the aid of pioneering use of stroboscopic lamps. The 'K' series machine was brilliant, quality just like Velocette was known for, reliability just like Velocette was known for and it was fast. But the motorcycle was expensive to produce. 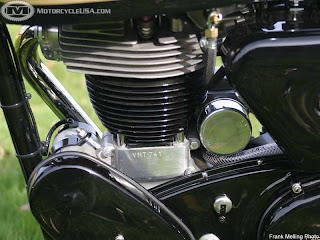 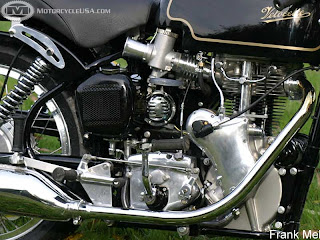 So in the mid 30s, to cut production cost, the company decided to introduce a new line of overhead valve (OHV) machines. The K series also required very skilled labour for the shaft-and-bevel camshaft drive which also proved costlywas expensive to produce, so a simpler OHV design was designed. The famous MOV was the first lot to have the specified machine. It had a square engine, i.e that the bore and stroke was euqal in dimensions (68 mm) producing a net capacity of 250cc. It was a very spirited machine witha top whack of 130kmph and it found instant success. Of course being a Velocette, relaibilty was supreme with with excellent road manners. It was an immediate sales success. Then came the MAC350 witha lengthened stroke, which proved to be not only more powerful, but was also more indemand than the MOV. This became Velocette triumph card and bought in a lot of moolah for the company. 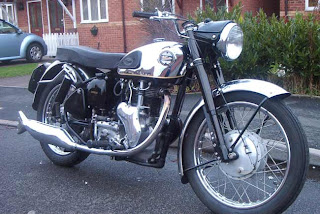 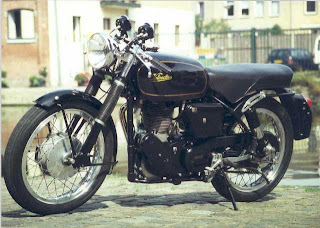 Its success lead into producing an even bigger engine, the MSS500 with a heavier frame to support a sidecar (a trend at that time) and it also proved to be a success. After the Second World War, the company saw its best selling model ever the LE which was a model of innovation. With help from a certain gentelman by the name of Phil Irving (no introductions neccessary), the LE was customized to a 192 cc watercooled flat twin with side valves, a pressed steel frame and telescopic forks and swingarm. It was sophisticated and expensive. Although it was their best seller, the hugh costs were never recovered. An interesting titbit - British officers needed to salute with their right hand when they saw a senior officer. In the LE, thios was dangerous and so it was ruled that officers on LE need not salute, but should incline their heads, kind of 'nodding' and bikers in LE came to be known as Noddy's! and the bikes became 'Noddy Bikes'. 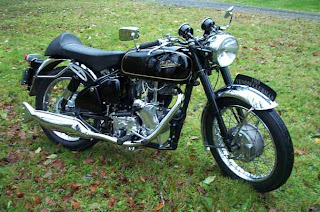 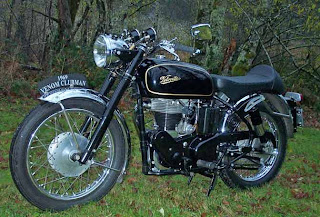 And then the 50s saw what now we associate Velocette with, the Thruxton, the Venom, the Clubman... oh! what a portfolio! In 1949 & 1950 Velocette were the World 350 cc champions. The 50s saw the re-emersion of the successful MAC and the MSS with a redesigned engine, a swinging arm rear suspension and a dual seat. Scrambler and US variants of the MSS also started production. Then came the 500 cc Venom, the 350 cc Viper and a 200 cc air cooled flat-twin sports model Valiant. The L.E. Mk III appears with four-speed foot change and kickstarter. The 50s were the most productive years for Velocette. In 1960, Velocette again did something uniquely innovative - a 2 stroke 250cc opposed twin machine, it was the Viceroy... and that was a scooter! First of all, the twin cylinders were front mounted, then the fuel tank was mounted under the front leg shield. The compact engine was connected to the rear-mounted clutch and transmission by a drive shaft from the engine-mounted flywheel. Though not a sales success, it was reported to have a very comfortable cruise with a top speed of 65 MPH (105 km/h), great performance and superb handling, features always present on a Velocette! 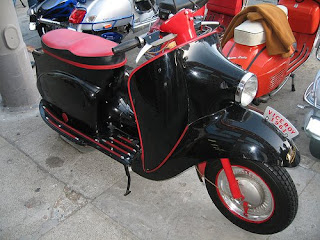 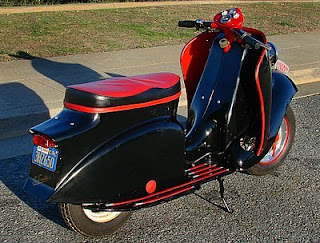 By 1965, the Velocette factory in Hall Green, Birmingham, was on its last legs. After sixty years of being a world leading innovator and manufacturer Velocette were being caught in a time wrap. What probably happened was that while during the 30s they were one of the leading innovators, after the WWII, other companies grew leaps and bounds, while Veloce were just tweaking their old portfolio. The positive stop, foot change, gearbox which is still in use today by virtually every manufacturer in the world, in 1932, the introduction of automatic lubrication on two-strokes, supercharged twins, overhead cams, water-cooled four-strokes, all these innovations somehow started decreasing post the Second World War. Six years of war had taken a terrible toll. Also while the other companies (e.g British) has started looking at previously uncharted continents, Veloce were hard to find outside the U.K, teribble marketing. 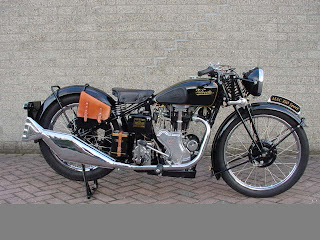 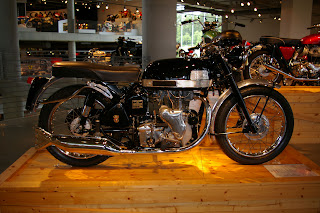 Some still maintain that the Venom's 500cc, push-rod engine is still arguably the best example of a hyper sports British four-stroke single. The high cam motor has a short push-rod which gives much of the advantage of an OHC engine without the costs and the extremely narrow crankcases result in a very stiff, efficient crankshaft with superb handling to compliment the machine. The Venom was both fast and durable - and it was to prove that point when in 1961 an Anglo-French team took the world 24 hour record, averaging over 100.05 mph. Then came the Thruxton, an upgraded version of the Venom. The 8" front brake was replaced by a twin leading shoe conversion which aided stopping power, a newer suspension, a close ratio gear box and bigger valves. Also 1 1/2" Amal GP carburetor and race cams let the motor breath effectively. This was a true production racer with a top whack of 200 kmph ( 120 mph). In 1964 Velocette took the 500cc class award in the Thruxton 500 mile race - the blue riband of production races. But the big effort was reserved for the motor. The cylinder head was gas flowed by hand and were fitted. During that time, BSA Goldstar was the 'Star' and the Thruxton was its nemesis in all departments. 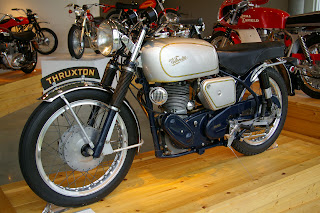 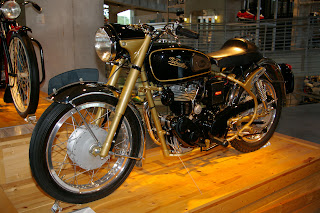 Around a 1000 Thruxtons were built. The exhaust was booming with its evocative fish-tail silencer! What was surprising was that why didn't Veloce bring these simple innovations earlier during their peak period, the 50s, because it would have added solid reputation to the brand. By the 60s, Veloce were already fading and nothing was helping them very much. Also why didn't Veloce ever got to the electric starter were some of the other queries which will always remain unanswered. People started looking for more and Veloce just didn't match up to the Japanese boom. The late 1960s were the last years of production for Velocette motorcycles, production for Viper and Vogue ending in 1968, "Special", Scrambler and Endurance in 1969, and MSS Venom and Thruxton in 1970. Veloce Ltd. closed in February 1971. 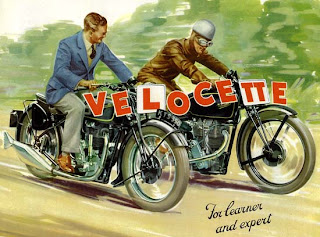 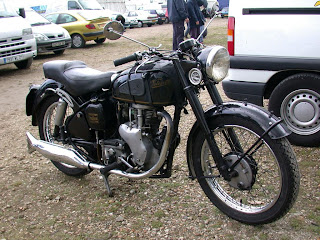 Source of history courtesy Wiki, some photos are courtesy Motorcycling USA. Visit the Velocette U.K Owners and Velocette U.S Owners websites. I am sure you will love it!