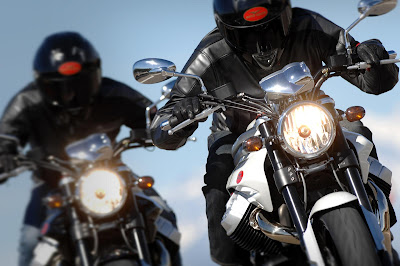 Before you start reading the post, I would really really request you to click on the first photo below and study the 2200+ superhuge image in details. The size would be probably 1/10th of the actual motorcycle. But the detailing with captivate you. I know its Italian, I know its a road bike made by Moto Guzzi, but I really dont remember the last time I was so awe strucked by a motorcycle looks. Step aside MV, step aside Ducati, step aside Triumph, the GRISLO 1200 8v has just choosen its road. Its breath takingly brutally beautiful. And it has the performance to match its killer looks. 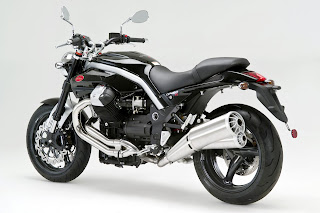 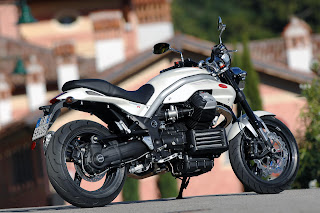 Its naked and its muscularly chiseled, its bold and brash, its got the 'Are-you-taking-to-me' attitude. And forget the detailing, okay, you cannot ignore the detailing, but look at the finish of chrome and satin metal! But if you pat attention, you will notice that the body work is minimal but the curves comes at all the right places, it has got 'Made in Italy' written all over.
This is the new face of Moto Guzzi with new engineering technology while still retaining the essence of a Guzzi. In an instant, you will know that it's a Guzzi, of course the naked 90 degree engine is the statement. Again the narrow tail section which we have now-a-days come to associate with a Guzzi. The tank merges effortlesly with the seat which gives it a even more aerodynamic look and finishes off with the beautiful LED tail lights. The round headlamp with the silver coloured assembly on top, the tubular handlebars with those shiny mirrors also reflect to the classic Guzzi looks. The mechanical components are on full display. 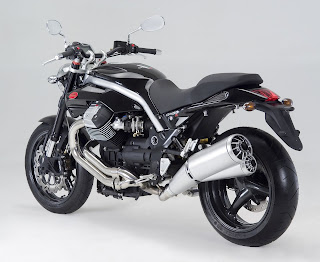 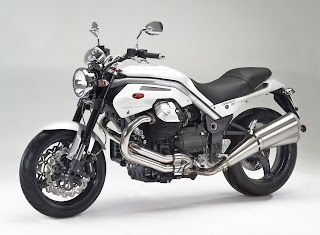 The heart of the bike (read performance) is derived from Moto Guzzi’s completely redesigned “Quattrovalvole” engine. This motor is aligned in a transverse placement, unique and indeginious to Guzzis. Yes, you can easily say that it is a Guzzi from its looks, but the engine has undergone significant changes. Guzzi fans have often complained (actyually, not complained, but wished) that their Guzzi had more power to compliment the stunning good looks. Well, Guzzi just heard them. Usully the Guzzi delivers around 80 hp, so considering that, this is a huge leap forward. Honestly, how many street naked bikes have 3 figure hp sheets? Although yet to be tested, this is definitely the most powerful Guzzi to roll out of its stable and its estimated that it can do a good 235 kmph (140mph). Now they are at par with other naked bikes like those coming from BMW or Ducati or Buell. 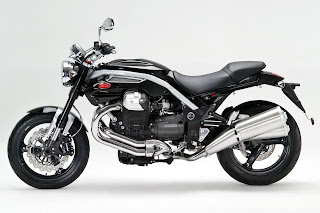 In order to power these high cams, two chain drives run at the motor's rear, requiring heavily modified cases and new cylinders too, so this engine has no relation to the eight-valve 1000cc Daytona/Centauro motor of the mid-’90s. In order to let this new engine breathe well at high revs, enormous throttle bodies of 50mm diameter have been installed.
It is said to have (in all) 563 new components! The twin have four valves each, hence the moniker of 8v. Its operated by a single camshaft in each head that is driven by a noiseless timing chain with an hydraulically operated chain tensioner. Twin 50mm throttle bodies work in conjunction with Weber injectors to electronically feed fuel into the “Quattrovalvole” The engine plant of 1151 cc is both air and oil cooled producing a mammoth 110 hp @ 7500 rpm with a equally stunning compression ratio of 11.1 : 1 from its redesigned heads and pistons. 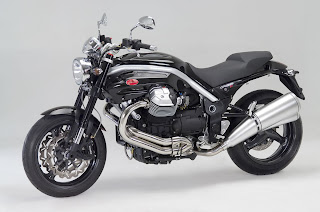 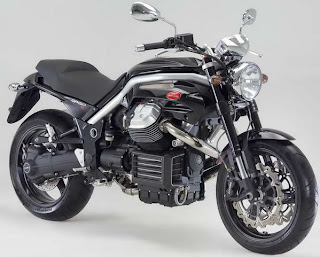 There is ample of low end torque and peaks at 80 ft lbs @ 6400 rpm. All these means that performance has been heightened like never before. Other new designs for enhanced performance includes gear driven oil pumps for improved lubrication and cooling fins aligned to better dissipate engine heat. Transmission is aided by a six speed gear box with a single clutch plate.
The monoshock is aided by a single sided swingarm making way to the 2 x 1 exhaust for the famous Guzzi growl. The front end utilizes fully adjustable 43mm Showa upside-down forks now with carbon nitride treatment. Radial mounted daul floating 320mm wave rotors with Brembo 4 piston brake calibers will give you enough confidence to stop the beast when you want to while the rear wheel is slowed via a Brembo 2-piston caliper mated to a 282mm disc. The original two-valve design prevented from pushing for high compression ratios. Not that the Brevia or other models are not powerful enough, they are more than adequate, but the 1200 Grislo is a step further and in the right direction. 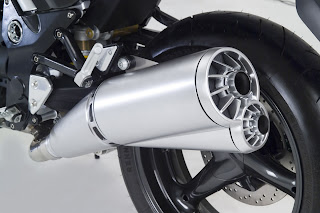 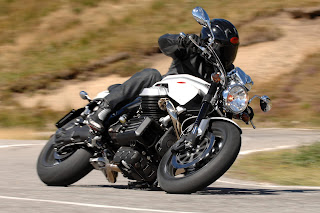 A little bit of Guzzi heritage - Founded in 1921 in Mandello del Lario (of course, its in Italy), Guzzis are still being produced in the same place. Moto Guzzi has 14 world GP titles, 22 world records and 11 Isle of Man Tourist Trophy wins under their name. In December 2004 Moto Guzzi became part of the Piaggio Group and the Piaggio umbrella has brands like Vespa, Gilera, Derbi, Aprilia, Scarabeo and now, Moto Guzzi.
It has retained all the values of a Guzzi and just when you thought that Guzzi cant look any more beautiful, comes the 1200 8v! Dottore Marabese has to be complimented for this Griso's design. He has maintained and more mixed the aggressive looks with the classic look very well. It looks very very 'sophisticatedly' sporty!
But of course, thats a Guzzi, right? So it has to be exclusive. You have to be passionatly enthusiastic enough to shell out $14,290 for this beauty when it hit stores this month all over Europe and the U.S. Moto Guzzi is slowly but surely coming out from the bottom and the 1200 Grislo 8v is just wjat the doctor prescribed to the bosses in Moto Guzzi.