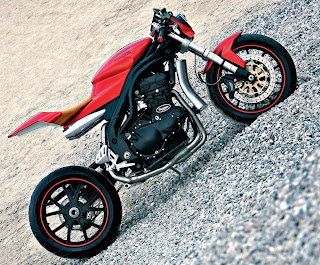 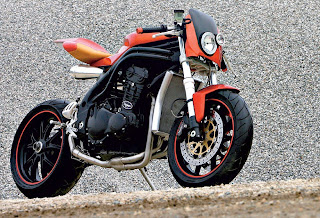 You cant have a more naked bike, can you? This Speed Triple is build by Angel Lussiana. The bike retains the original chassis and suspension, but the exhaust system is all new. And what about the radiator? Cant figure it! Why, it has been taken from the Ducati 916. The bodyworks and front fender have been restyled which is evident. What I am not able to decide is whether the swingarm has been lengthened. Although its not mentioned, it looks streched out, but then probably the bodyworks just might give that impression. The reservoir also acts as a framework. The bike is entirely hand crafted. 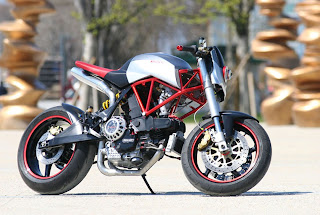 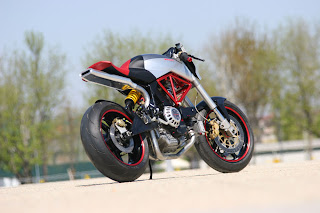 Another creation of Angel Lussiana is this concept roadster based on the Ducati 900 SS. The framework of origin has been restyled and the bike has got Kayaba forks accompanied by GBC adjustable shock at the rear. The frame is unit formed aluminum that is lightened the weight of the bike.
He says "I wanted to create a motorcycle that was new in the truest sense of the word: nimble and fun, but not for this Spartan, in fact, I wanted to give a touch of elegance to make an object not only pleasant to the eyes of expert but even more trendy...". If you notice the curves, the bike looks slimmer thanthe 900 SS. The swingarm has been strengthed working on the truss reinforcement, with the two main beams with a layer of sheet metal in Peraluman by 2.5 mm. 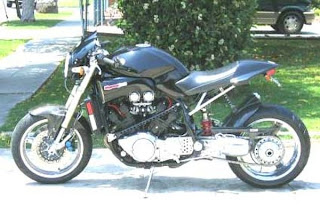 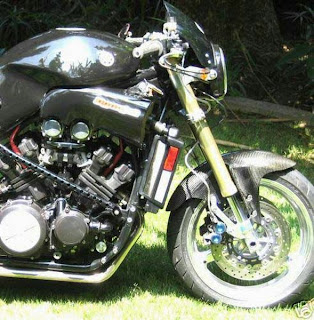 This was featured some time ago on ebay. If you are confused that what is actually the base version, then you are not the only one. A part of the framework is from the Vmax (I am sure you figured that out), the monoshock and the rear wheel comes from Triumph Speed Triple while the tank and the seat are sourced from a Ducati Monster! And thats not all, the front wheel comes from a Yamaha R1. Thats 4 bikes already. The exhaust of 4 to 1 is made in house. The engine is retained from the V Max doing 150 bhp.