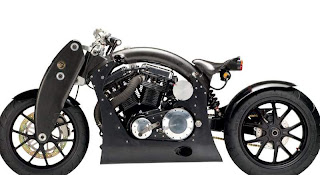 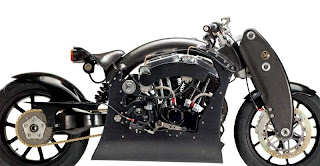 Well... of course, its the Wraith! You have seen the videos, you have been visually gratified and you have met the sibling. Time now to get introduced to this $60,000 mammoth.
Well, it will be very very hard to argue that Confederate Motorcycles do things very differently. Having seen the Hellcat, you know its like no other bike. The Wraith, then takes a few steps forward from Hellcat has left. And why not? After all, the Confederate's motto is "The Art of Rebellion". Its more unconventional than the Hellcat and thats what draws you even more. At the time when I did a feature on the Hellcat, the Wraith didn't appeal me as much as the elder sibling. But slowly, you realize what a piece of art this is, and when you see it move on the streets growling, you just know.... that this alternative design is a thing of the future
The standout feature (at the first look) is a massive carbon-fiber girder fork. The history behind this is even more interesting. You all know about the Britten. Yes, the only one built by the late Kiwi visionary John Britten. The creator of Wraith, Mr. J.T. Nesbitt who is a fine-arts graduate and sculptor (and it shows!) had created the girder fork as a tribute to John because John made a similar design on his V1000 racebike in 1991. And what may be the benefit of such a fork? The forward place fork gives additional room to place the V-Twin as far forward as possible which increases frontal weight and that gives a better grip and handling. Also the front wheel is less stressed. The Wraith design is minimal, very bare minimal and thats what Nesbitt wanted the Wraith to be. But minimal in Nesbitt's meaning doesn't really have to gel with what the world thinks! 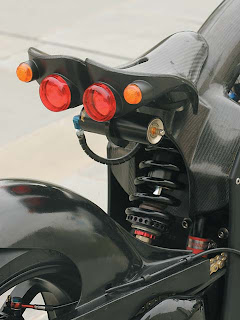 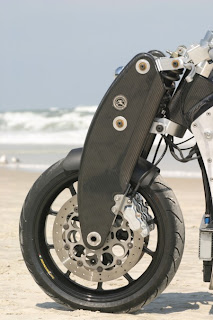 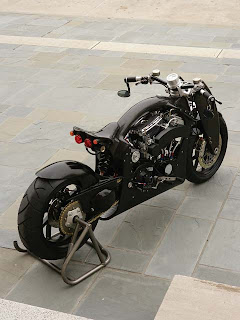 So how did it all start? Nesbitt knew Matt Chambers, the designer for the Hellcat. He approached him and told what he always wanted to do since childhood, build motorcycles, but in his own fashion. A hardcore Iron Horse magazine fanatic, he was awestruck by the Hellcat and that lead to dream and fantasize about his own creation for 10 years until it happened.
In Nesbitt's own words, "I've been building bikes since I was in art school... started building motorcycles as part of my sculpture class. I almost got kicked out of school when I failed some classes, though maybe assembling a motorcycle in the art faculty studio and riding it up and down the second floor of the building wasn't such a smart idea. But I've come to realize what I was yearning for was to study vehicle design, which they didn't have in the curriculum and I didn't know to ask. But I'm so fortunate I didn't find out it existed because if I'd run through the mill like everyone else I'd wind up doing stuff like everyone else's, too. My design approach is much more art-form-based, more inspirational... After I graduated I ended up waiting tables and tending bar to make a living, and working for Iron Horse magazine in my free time, which was a great incubator of ideas... In `96 or so I tested the first Confederate Hellcat for the magazine. And I was so overwhelmed by what the bike stood for, so intrigued and mystified by Matt Chambers' alternative vision for building motorcycles, that I couldn't let it go." And thats how it all started.
And what next Nesbitt mentions is probably what I have never been able to cohort in my thoughts, but probably always felt so!!! You see I have never done a feature on Sports bike, not that I dont like Sports bike, but somehow they visually dont appeal to me and now I know why! 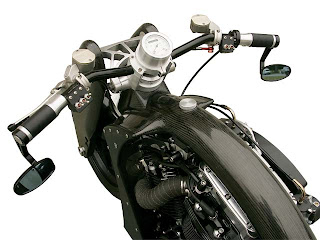 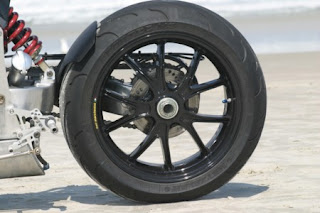 Nesbitt says "In today's motorcycle...the engine and the chassis don't speak the same design language. A bike like R1 has great engineering, but in terms of visual design it's a collection of short stories, not one long novel..." When people ask me why dont I like the visuals of a CBR or Busa, I never had any answer because I never actually knew the 'why'. Now I know.
He continues "For many of them it's just a piece of Band-Aid to cover up that mismatch. And to move design forward, sometimes you have to break things down. That's why in designing the Wraith I wanted to throw away all the extra hardware motorcycles have gathered around them in the past 100 years and reduce it to its bare, minimalist structure."
He very simply puts it. "I just want people to look at the Wraith and see it as something standing on its own, which they can form an opinion about, not as a bike that must be judged in comparison to other motorcycles."
Nesbitt started work on the project in 2002 and the first prototype was ready by 2004, Another interesting note - The first bike after being tested in Bonneville Salt Flats was ridden only once - up and down the local interstate to make sure it shifted properly. The bike after the test in its unpainted raw version (picture below) was send off to Los Angeles to a passionate collector, who just wanted to look at it and not ride it! Talk about money! Anyway, it did very well in the Salts blasting its way to 131 mph, The 'second' prototype (also pictured here) is significantly different and improved from that first rough prototype. What you see is the version you will get if you happen to purchage one. 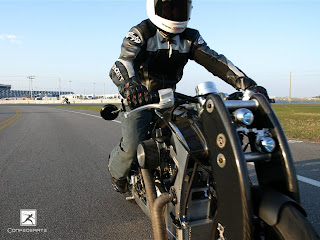 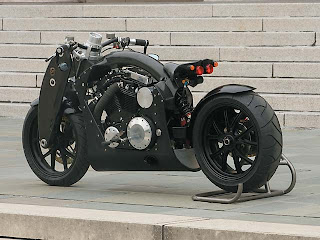 Of course the Wraith is not built for upright power. It has power and plenty of it, but the most focussed aspect was the beauty of a motorcycle. And it has very clearly mesmerized the world with its alternative look. If you look closely and minutely through your head, it has the elements which has fused the past, present and future in a unique way that you will agree to the fact, but dont know why? It will make you think about motorcycle designs in a different way, breaking away stereotypes and traditions. Its a fusion of art and science!
The motor used is Confederate’s liquid-cooled Foxtrot motor. It measures 107 x 92 mm for 1655 cc, with a 56 mm inlet valve and 41 mm exhaust, runs an 11:1 compression ratio with the forged pistons running in open deck Nikasil chrome-bore cylinders, and features a gear-driven primary and right-side belt final drive, via a multiplate oil-bath clutch and six-speed gearbox. get this! the V-Rod will be supercharged!
Sadly, Hurricane Katrina destroyed Confederate’s headquarters and it had to relocate from New Orleans to Birmingham, Alabama at the invitation of Mr. George Barber, who owns the Barber Museum, one of the world’s most prestigious motorcycle collection. Luckily the Wraith was being presented at a New York show that fateful night in 2005 and Matt and Nesbitt were in the Middle East for a future business proposal. But that just didn't dampen the Confederate guys. The beast was ready as per expected time. It is also called the B120. It produces around 125 horsepower, and a monsterous 131 foot-pounds of torque, enough to make it go fast as it weighs 410 pounds in a sporty 58.5 inches of wheelbase. Ride position is somewhat 'crouchy', but the bars are wide. The slim carbon fiber composite spine frame doubles as the oil tank. Nesbitt has left Confederate as he was not ready to move to the new location and Ed Jacobs, his conceptual design assistant, has taken over the reins of Confederate design and has certainly moved into the limelight with the next under project, the RENAVATIO. 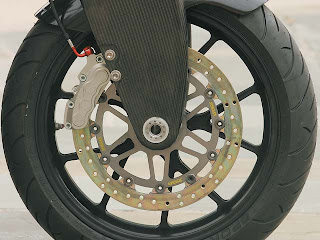 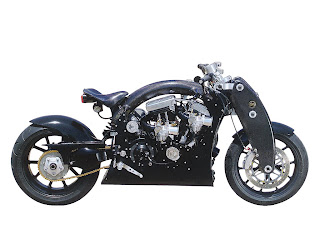