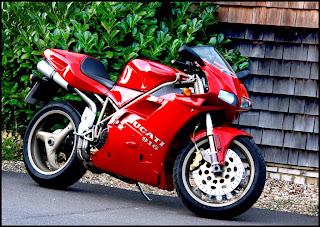 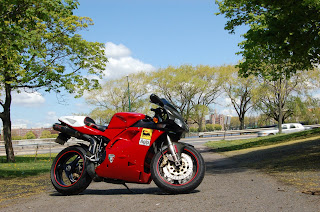 The word DUCATI instantly gives a visual of stunning red low stance full fairing super sports bike with a exhaust to die for. Of course, the Ducati stable has the Monsters and the New Age Retros, but the first thing coming in the mind are the 900 series and now the hallowed 1098. Although the bikes vary on appearance, but of course there is something similar by which even from a mile, you can recognize a parked Ducati. Probably those eyes with the perched up nose, the minimally scooped fairings, the frame (which is usually covered in the SBKs), whatever... you can make out a Ducati. All these brilliant 998s, 848s and 748s has a single parent gene, the noble ancestor, the 916! even all the competition bikes are a direct desendent of the God-like Status 916. 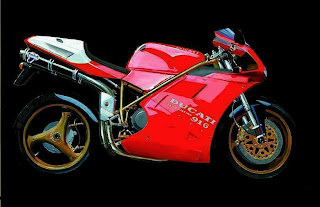 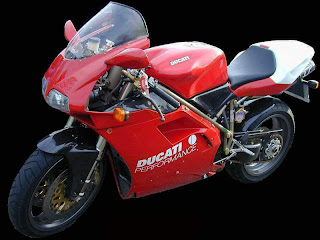 The Ducati 916 was a true milestone in motorcycling history. The 916 was supposed to be launched in 1993, the sixth year of the Superbike championship. Engineer Bordi, at the time Ducati's Technical Director, decided to postpone the presentation of the new Superbike, the 916. Honda had already heated up the market with their new bike, the RC 45. Ducati continued with the legendary 888 buying some more time to perfect their 916. Of course, the 888 was an upgraded version of 851, Ducati's first Liquid cooled 4 reed valve machine. The road version of that year's racebike was the 118 HP 888 SP5. 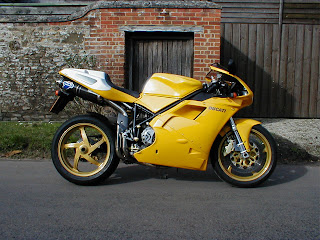 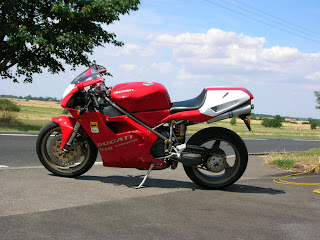 In Autumn 1993, Ducati presented the 916 Strada prototype in the Milan show. At first, everyone was stunned by this radically innovative motorcycle. It was Ducati's first truly large-scale project. Compare it to the 888 will show you how hard Ducati has worked on the 916. The attention to detail, which has become a speciality for Ducati now was first seen in the 916. It was something the world has never anticipated, but everyone just lapped up this beautiful creation. Its space-age styling, the narrow sides, everything was a very very big step from the 888, the very bike it was derived from. It was a thoroughbred track vehicle with licence plate, twin headlamps and mirrors. 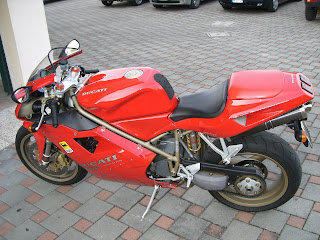 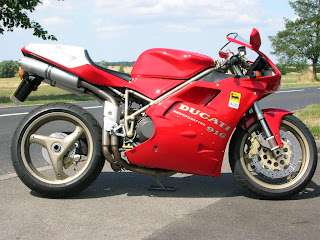 Who designed it? Well if I say you wont get even a single price for guessing it right you will just guess it right! It was designed by of course none other than 'the' Massimo Tamburini and his team at the Cagiva Research Centre in San Marino, creator of the MV Augusta F4, the Bimota DB1, the Honda NR750, the Ducati Paso among some of his best known creations, he also had designed the 888 and the 851. According to him, he just removed every weakness from the 888 and instead these were improved and made state of the art. Some of the mentionable changes included better weight distribution, wider chassis pipes, rear single sided swing arm and an adjustable headstock angle. 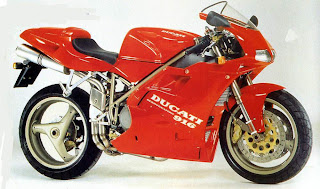 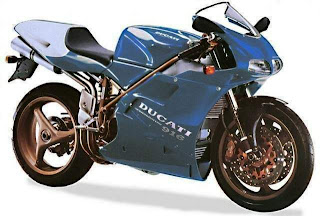 Well, I for one never ever can imagine how can anyone take an ordinary looking 888, remove the weaknesses and give a God-like 916. Probably I need to have a brain twice the one I currently carry to even understand anything around it. Anyway, at the Milan Show everyone mentioned the 916 as the eighth wonder of the world. I have the mags of 1994 (Auto India) where it was featured in a bright yellow costumes and must say, when you look at something totally new, initially you kind of think 'What the..' before you start appreciating it. But the 916 was different. It stunned you at the very first sight. Massimo Tamburini went on to design the MV Agusta F4 and if you have a keen eye you will notice the many similarities with the 916 especially in the tail section. 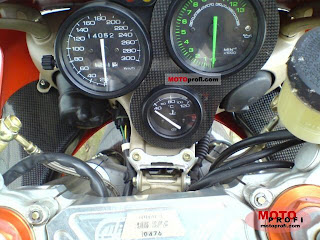 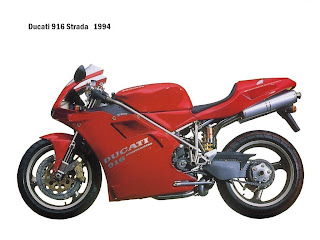 The first 916 - the "Strada" version was only available in a single seat version with 114 HP at 9,000 RPM. So in 1994, the racing version came out... for the 1994 WSBK, the 916 SP: 955cc for 150 HP at 11,000, Ohlins suspension, a new airbox with 37 and 31 mm valves. The 916 won all the prizes that year, including "Motorbike of the Year". From the 916 onwards, through the 996 and the 998, Ducati campaigned very successfully in the SBK WC winning championships with Carl Fogarty, Troy Corser, and Troy Bayliss. The street legal version was also a serious threat to Japanese rivals. Displacing 916 cc's and boasting an impressive 11:1 compression ratio, it pumped 105 horsepower to the rear wheel. Not that it was the most powerful bike in its class, but a combination of composite materials, compact design, and weight-saving engineering certainly made it one of the lightest at only 200 kgs (438 pounds) andit had a more even torque spread. 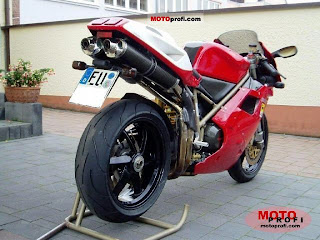 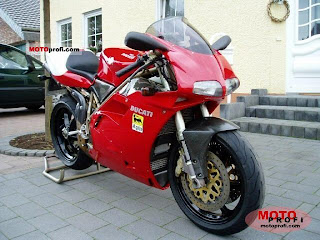 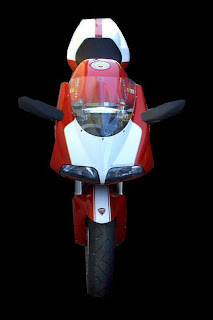 The 916's water-cooled engine was essentially the same as its predecessor with an increased crankshaft stroke from 64mm to 66mm while retaining the 94mm bore. Okay, now if you think, it was beautiful, think about this - everything in the bike was built with a purpose. The single-sided swingarm was beautiful, but designed to make wheel changes faster during races. (Did you ever think about that?) The underseat exhausts, which was initially introduced on Honda NR before Ducati popularized it, improves aerodynamic performance and resultantly gave very clean lines. (bet you thought it was a 916 trademark!) Now how hard is it to build something like an artist creation, like a free flowing paint brush, but with an objective beneath!Total production years remained 7 from 1993 to 1999, when it was replaced by the evn more stunning and advanced 996. Well then came the 998, the 999 to the present 1098, but what started it all? Yes, the 916! To go a little further down the history lane and little bit of GK, the first twin engine from Ducati was the Pantah, introduced in 1979 designed by the Sicilain mastreo, Fabio Taglioni. All modern Ducati engines are derivatives of the Pantah, which uses a set of revolving cams to actuate the engine's valves, called desmodromic valves. Ducati is the only motorcycle manufacturer which uses this type of valve gear. DESMO is the official name of this system. The bike became an icon from the mid 90s improving Ducati's stature both in WSBK and legal arenes by leaps and bounds. The iconic Ducati 916 was one of the most beautiful designs in the history of motorcycle development.
Specifications (Street Legal version)
Engine: 916 cc L-Twin, Desmodromic 4 valves per cylinder, Liquid cooled, DOCH
Transmission: Weber-Marelli electronic injection, single injector per cylinder, Wet sump forced lubrication, 15 plates, hydraulic actuated clutch 6-speed gearbox
Bore and Stroke: 94 x 66 mm
Compression Ratio: 11:1
Max Power & Torque: 114 Hp @ 9000 rpm & 101 Nm @ 7000 rpm
Max Speed: 260 km/h ,
Inlet & Exhaust Valves: 33 mm & 29 mm
Chassis: Tubular Steel Trellis frame
Front & Rear Suspension: 43mm Showa GD 051 upside-down & Mono Showa GD052-007-02
Front & Rear Brake: Double floating -320 with 4 pistons caliper & Single floating -200 mm
Front Front & Rear Tyre: 120/70 -17 & 190/50 -17